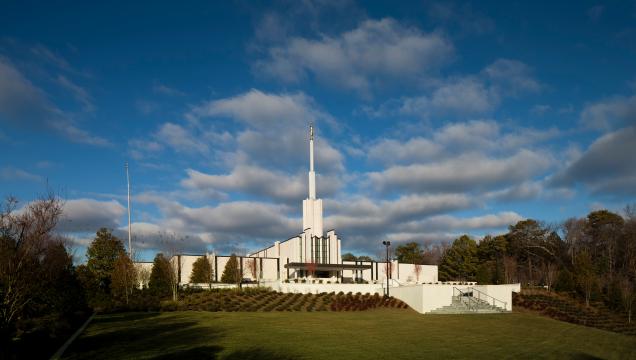 The outside of the Atlanta Georgia Temple.

President Thomas S. Monson, president of The Church of Jesus Christ of Latter-day Saints, rededicated the Atlanta Georgia Temple in two sessions Sunday after an extensive closure for renovation. Both sessions were broadcast to meetinghouses throughout the temple district, enabling thousands of devout Latter-day Saints to participate. 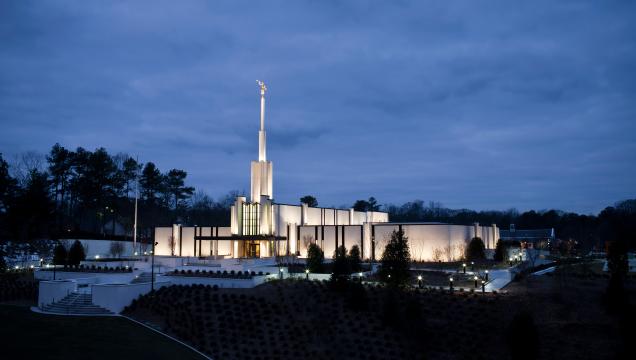 The outside of the Atlanta Georgia Temple at night.

Paula Watson attended the rededication ceremony Sunday morning. “It’s really hard to describe the feelings that you experience when you’re inside the temple with a prophet,” she recalled. “I was right there with him. It’s very touching. The spirit is just overwhelming. You feel peace. You feel love, but mostly gratitude that the temple has been rededicated and we can enter through its doors again.”

Those thoughts were echoed by Rob Williams, who also attended the ceremony. “The expectation has gotten greater and greater and we really appreciate it now that it has been rededicated. It’s a chance to come back and renew our own commitment to come to the temple,” he said. 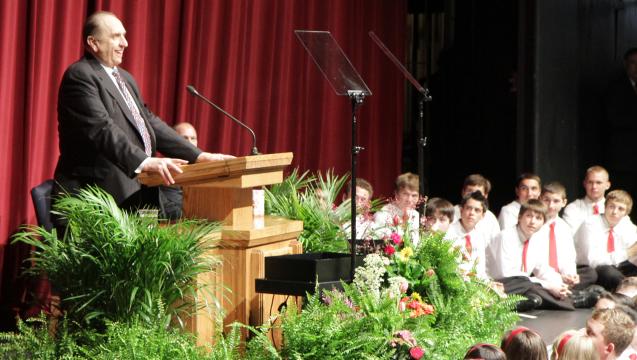 President Thomas S. Monson kicked off the cultural celebration with a few remarks to the capacity audience at the Atlanta Civic Center Saturday, April 30, 2011.

The rededication was preceded by a cultural celebration Saturday evening at the Atlanta Civic Center. Youth performers from 150 area congregations danced, sang and presented a visual display of Georgia history and culture in “Southern Lights.” 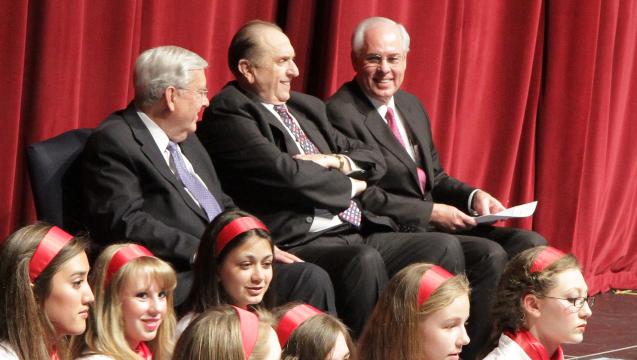 “The magnificent Atlanta Temple, in this beautiful part of the country, will be rededicated in the morning,” said President Monson to a capacity audience. “It is, of course, the reason for this great celebration. Although … its light has been somewhat dimmed for nearly two years, tomorrow that light will return.” 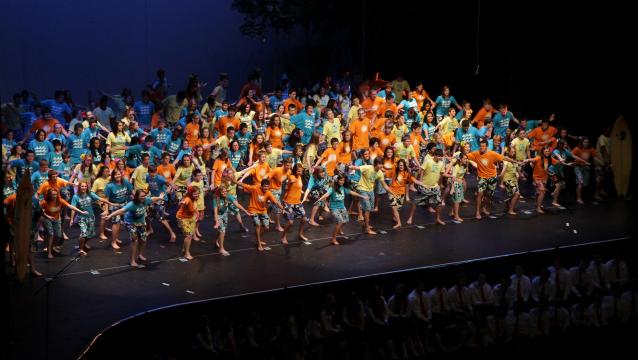 Latter-day Saint youth leader Tony Parker said the dances were a challenge to learn for the 2,700 young people, but they worked hard and had faith. “I’ve seen a magnificent change in regards to the way in which they embraced the opportunity to represent their [congregations], their families and Jesus Christ.” 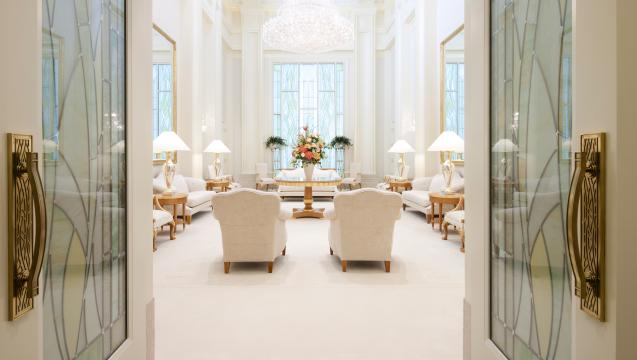 Alexandra was one of the participants in the cultural celebration. She recalled her favorite part of the night. “The highlight of the evening was … the closing number. We were able to sing in front of the prophet and wave our lights … I could really feel the light shining from within all the people that were there.” 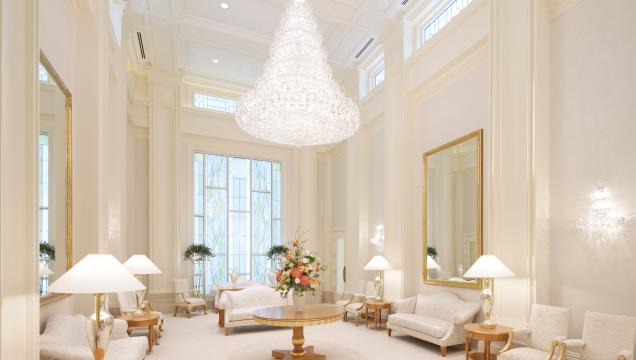 President Monson told those participating in the event that they would be blessed by the light which emanated from each one of them. 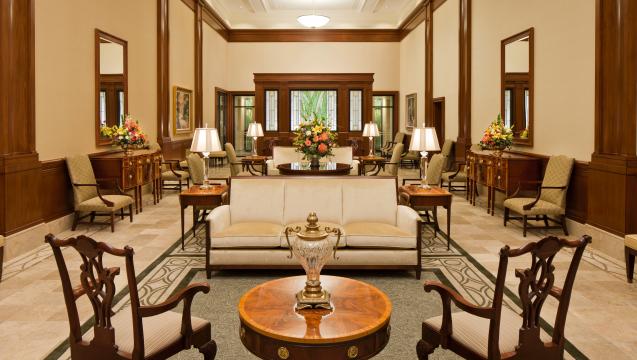 The Atlanta Georgia Temple was the first temple built in the southern United States. It was originally dedicated 1 June 1983 by President Gordon B. Hinckley, then a counselor in the First Presidency. President Monson also attended that dedication. Nearly three decades after the orginal dedication, President Monson returned as the president of the Church to rededicate the temple. 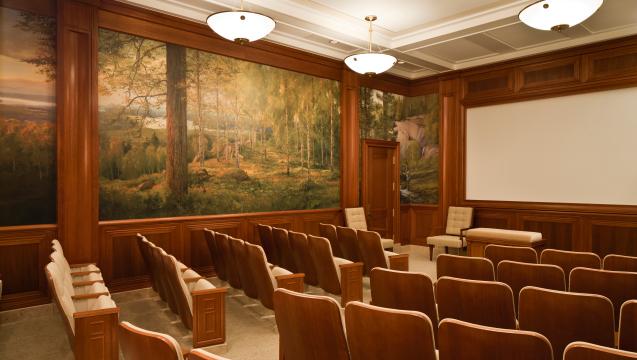 The temple serves more than 76,000 Latter-day Saints living in and around Georgia.

The temple was closed 1 July 2009 for renovation. This renovation included complete replacement of the electrical, plumbing and HVAC systems, as well as the installation of an automatic fire sprinkler system. Work was also done to assure more complete functionality for the disabled. In addition to the technical improvements, new appointments include rich eucalyptus hardwood from Brazil, original art, Swarovski crystal chandeliers, 45 new art-glass panels, etched carpets and added windows for increased natural light. The exterior of the temple remains mostly unchanged, with some new landscaping. 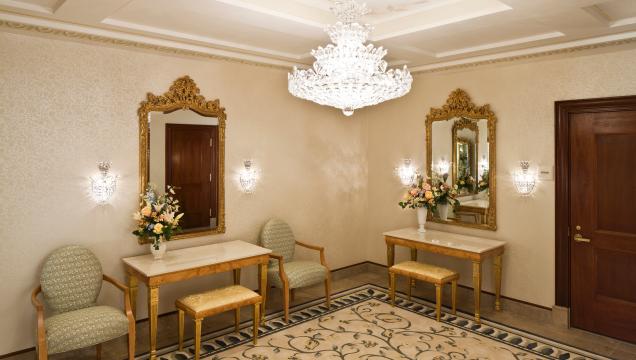 Shortly after renovations were complete, the public was invited to a two-week open house. More than 56,000 people toured the building.

Formal temple work commences Tuesday, 3 May 2011. An estimated 2.5 million Latter-day Saints have entered the Atlanta temple since its original dedication in 1983.

Today, at least one temple is located in every adjoining state, in Birmingham, Alabama; Memphis and Nashville, Tennessee; Raleigh, North Carolina; Columbia, South Carolina and Orlando, Florida. Worldwide there are 134 operating temples, with another 26 announced or in some phase of construction, including a second temple in Florida, to be located in or near Ft. Lauderdale.

Latter-day Saint temples differ from the meetinghouses or chapels where members meet for Sunday worship services. Temples are considered “houses of the Lord” where the teachings of Jesus Christ are reaffirmed through marriage, baptism and other ordinances that unite families for eternity. In the temple, Church members learn more about the purpose of life and make covenants to follow Jesus Christ and serve their fellow man.