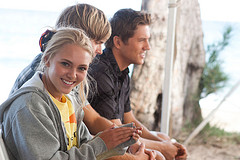 Christian cinema has been gaining traction in recent years, and with box-office dollars comes increased production values and bigger-name actors. Fortunately what matters most, a focus on the sustaining power of faith, compassion, and family, isn’t lost in the shuffle in the case of Soul Surfer.

Based on the true story of Bethany Hamilton, a teen surfing prodigy who lost an arm to a tiger shark, the film overcomes a generous sprinkling of sports-movie cliches through the strength of its acting, the power of the story, and the sincerity of its message. AnnaSophia Robb (Bridge to Terabithia, Tim Burton’s Charlie and the Chocolate Factory) proves herself a capable young actress as Hamilton and gets fine support from Dennis Quaid (The Rookie, Frequency) and Helen Hunt (Twister, TV’s Mad About You), who radiate warmth as her parents.

The supporting cast also give solid performances, from the unknown actors to recognizable faces such as Craig T. Nelson (The Proposal, The Incredibles, TV’s Coach) and Kevin Sorbo (Hercules: The Legendary Journeys). Country music superstar Carrie Underwood is fine in a supporting role as a youth minister, but I can’t help but think that this is stunt-casting (it is) to draw crowds (it’s working). Though I think the role would’ve been better filled by a professional actress, Underwood ultimately acquits herself well.

The script is fairly solid, though some lines of dialogue are a bit hackneyed and the inclusion of a fictional arch-rival is unnecessary. Though the filmmakers have said that this nemesis is meant to represent many other girls Hamilton competed against, she comes across as one-dimensional and her transformation feels forced. Still, the film sticks mostly to the facts, which are incredible, and it unabashedly emphasizes strong marriages and families, as well as faith in Jesus Christ.

The musical score is beautiful and the cinematography skillfully captures the lush beauty of Hawaii. Plus the surfing footage is terrific: the actors do much of their own surfing and the real Bethany Hamilton doubles, in the more difficult shots, for the actress playing her. The story is compelling and the film, despite its few flaws, is moving, entertaining, and absolutely inspiring. This one comes recommended for the whole family, with the possible exception of small children (see below)

Content Advisory: Soul Surfer is rated PG. Sexuality and objectionable language are not an issue in this faith-based family film. Men and teenage boys wear swimming trunks, while women and teenage girls wear bikinis and short shorts, but this is accurate to the surfing culture in Hawaii and not gratuitous or sensualized. A brief shark attack and its traumatic aftermath are realistically portrayed, with some blood and quick views of an arm stump, but the film doesn’t linger on gore. The scene is likely too intense for young children, however.

Messages to Discuss: The Lord gives, and He takes away(Job 1:21). Parents who lovingly and supportively raise their children to follow Jesus will likely see them follow Him forever(Proverbs 22:6). We can do all things through Christ, who strengthens us (Philippians 4:13). Learn in your youth to follow God (Alma 37:35). Love is the greatest power (Moroni 7:46-47). We cannot see, at the present time, the glory and blessings the Lord has prepared for us after our difficulties(D&C 58: 3-4).

FOR MORE FILM REVIEWS, AS WELL AS FUN VIDEOS, VISIT MY WEBSITE: www.mormonmovieguy.com