Why Is Sex Such A Taboo Subject in Families? | Meridian Magazine

Why Is Sex Such A Taboo Subject in Families?

Click here to read, “Why is Sex Such a Taboo Subject in Marriage?”

Why do so few parents correctly and adequately teach their children about sexuality to sufficiently prepare them for safe passage through the teen years, and for a fulfilling intimate experience within marriage?

This is sobering information. If parents aren’t doing the teaching then who is? And what are they teaching?

The following are some of the reasons that sex is such a taboo subject within families, and why parents do not teach their children about sexuality, nor prepare them for intimacy within marriage.

One of the first responses many parents give regarding why they don’t talk to their children about sex is, “If we talk to our kids about it, they’ll just go out and do it.” Brad Wilcox, author of Where Do Babies Come From? stated:

“Some parents worry that by speaking frankly with children about their bodies and sexuality they are somehow promoting or condoning promiscuous behavior. My experience has taught me the opposite is true. The most sexually active teens I have encountered are usually the least informed. It is silence and ignorance, not open communication, which often lead to poor choices. The more solid sexual information children receive from their parents, the more capable they are of making righteous and mature choices. In fact, some studies indicate that parents who talk with their children about sex actually delay their children’s sexual involvement because they satisfy curiosity that so often leads to experimentation” (Wilcox, ix-x).

One parent, who works in a junior high school, acknowledged the fact that numerous parents had expressed this belief, and felt it was better not to talk about sex to their children. He then said, “So we keep them in the dark about it, and they experiment with disastrous results.” The seriousness of sexual sin is considerable, but parents must realize that it is light and truth that provides power to resist temptation, not ignorance and darkness (see John 3:19-20). Satan works best in the dark. Parents need to increase the light.

The plain truth is that many parents are simply embarrassed to discuss such things with their children. Sex is the single most difficult and delicate topic about which parents have to talk to their children. Just saying some of the words “out loud” that would be required for such conversations, is enough to scare most parents from seriously considering such a discussion.

One mother avoided a discussion by placing a book about sex on her daughter’s bed. No word was ever said about it. The embarrassment this mother portrayed fueled the daughter’s discomfort, and contributed to the daughter’s growing belief that sex must be some unmentionable human misfortune. Parental fear and embarrassment can be overcome with effort. I’ve told many a parent to practice saying any “difficult” words out loud in front of a mirror until the words can be said calmly and confidently. One of the most important aspects of parent/child discussions about sex and the body is how the message is portrayed.

Parents’ embarrassment stems from their own sexual insecurities and their unaddressed negative thoughts and beliefs. Parents can’t teach a lie. Parents can’t teach that sex is special and sacred if they don’t feel that way themselves. Thoughts or feelings such as “I don’t really like sex” or “Why do I have to have this discussion?” or “I can’t tell them how ‘great’ it is or they’ll go out and do it” all affect a parent’s ability to provide “positive” sex education. 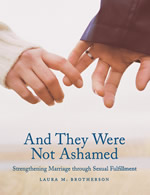 Often parents are not sufficiently self-aware to even realize that they have some negative issues. But parents must become aware of and address their own negative beliefs and attitudes, so that they can teach with pure light and truth. Parents must have a divine understanding of the sacred sexual experience and its relationship to happiness in marriage. (For more information see Chapters 1, 2 and 7 of the book And They Were Not Ashamed.

Many parents were never taught by their parents about sex, so they figure they don’t need to do so either. In today’s society parents do not have the luxury of leaving this critical subject unaddressed. This is “must-have” knowledge and understanding for today’s children. Every parent that “passes” on this parental responsibility gives power to Satan to fill the void, and you can bet he doesn’t pass it up!

5.       Parents have let Satan dominate the subject of sex.

If parents won’t talk about sex, and youth leaders focus on dire warnings and consequences, then Satan steps in to fill the void of positive teachings. He perpetuates the negative through a media assault of misuse, distortion and degradation. He uses every tool at his disposal to make sex “taboo” for those who can teach correct principles, and he turns sex into a “free-for-all” for everyone else.

Society assists Satan by distorting the divine design of intimate relations in marriage through pornography and aberrant behavior to the point that even wholesome discussion of sex seems wrong. We’ve let Satan rule the dialogue for too long. Parents must determine to do better in providing more light to counterbalance the darkness.

Not only are parents embarrassed, but many children are also embarrassed by any talk related to sex. This occurs when parents have not taken advantage of teaching their children while they still have a “clean slate” – before the child has developed negative associations with the topic of sex. If parents begin to enlighten their children early enough, then it’s easier to teach and maintain the belief that sex is special and sacred – not gross!

Parents can avoid having to re-program already ingrained negative beliefs by being first to fill their children’s minds with a healthy, positive attitude regarding sexuality. Remember the story of the little tree that was planted and then left to grow on its own. Years later the tree had grown tall, but crooked. How much easier it would have been to provide some counterweight to keep the tree growing straight and strong against the wind.

It concerns me when I see or hear of kids “grossing out” when they see their parents hug or kiss, or are mortified by the thought of their parents “doing that.” Parents are reticent to take on the topic of intimacy when they get this kind of responses from their children. While some may say it’s normal for kids to feel that way. I disagree. Instead, it reflects a serious lack of understanding regarding the positive purposes of intimacy in marriage. Such a response also reflects a negative belief system and thought patterns that have been allowed to flourish.

One father shared the experience he had in talking with his 14-year-old daughter. The topic came up that he and her mother had a sexual relationship in their marriage.

The daughter was taken aback and asked if they had spoken with the bishop about it (as the youth are counseled to do in the case of pre-marital sexual activity). Youth may hear brief references to sex as being good and of God, but then hear a constant beat that sex is immoral, evil and wrong. Children understandably get embarrassed and confused.

I hope parents will be attentive to their children’s beliefs about sex and work to ensure that their beliefs are healthy and wholesome. It needs to be normal for children to know that sexual intimacy is a vital part of expressing love in marriage, and even be silently thrilled that their parents want to “do that” together. Parents with a healthy, godly understanding of sex, who then teach their children in a way that instills light and truth, will have children armed with understanding, respect and reverence regarding the gift of sexual intimacy in marriage.

Parents find it particularly difficult to broach such a delicate and difficult subject as sex with a child with whom they are having some struggles. When parent and child aren’t getting along, then the subject of sex is even more taboo. Parents may need to spend some time and effort rebuilding the relationship before intimate discussions can occur.

I am convinced that the primary causes of sin are: (1) unmet emotional needs, (2) negative core beliefs about the self, and (3) touch deprivation (especially when it comes to sexual sin). Parents can do much to meet their children’s emotional needs and strengthen the relationship with their child to eliminate the need for children to seek counterfeit love and substitute fulfillment. The parents’ efforts will pay rich dividends and provide preparation for imparting light and truth regarding intimacy.

Sex is a taboo subject in families because many parents are unsure of what to say about sex, much less when, or how to say it. If parents were never really taught about sex themselves, and haven’t put in the effort to learn correctly, then it’s likely that they feel insecure about their knowledge. (It can be intimidating to contemplate the questions today’s teens may ask!)

Some parents may think their children are too young for such a discussion, or that it’s too late now that their children are grown. Some may even think they don’t need to teach at all because they’ll figure it out after they get married! (Sex is simple and natural right?! What’s there to know?) This thinking indicates a lack of understanding of the female sexual response and the interplay of emotional, spiritual and physical intimacy. Such parents may ask the obligatory question just before the wedding, “Do you have any questions?” to which their young adult child replies, “Nope!”

Parents must prepare themselves and educate themselves. They must understand that sexual feelings are good, yet powerful, and must be bridled until God’s appointed time after marriage. If parents have a healthy, positive understanding, they can confidently teach that, “Good girls (and guys) do … but they wait until marriage!”

Parents must understand that teaching should begin early and continue throughout a child’s life. Sufficient teaching is not a one-time event. To provide enough understanding and appropriate information, while striving to erase the “taboo” that keeps attaching itself to this topic, parents will have to be tireless in their efforts to impart divine understanding. (For information on what to teach, when to teach and how to teach, see Chapters 14, 15 and 16 of And They Were Not Ashamed.)

I hope parents will prepare themselves to teach and project a powerful positive perspective of God’s purposes for intimacy in marriage. Parents can remove the taboo from the topic of sex and enlist in the effort to restore light and truth to the sacred subject of sexuality. What a wonderful service parents will be doing for their children, as well as their future sons- and daughters-in-law.

Laura M. Brotherson is a marriage and family life educator (CFLE) certified by the National Council on Family Relations (NCFR), and is the author of a groundbreaking new book on sexual intimacy and marital ONEness entitled, And They Were Not Ashamed – Strengthening Marriage through Sexual Fulfillment. For more information visit https://www.StrengtheningMarriage.com. Laura welcomes your comments at [email protected].