Edward, Self-Mastery and the Marital Fire 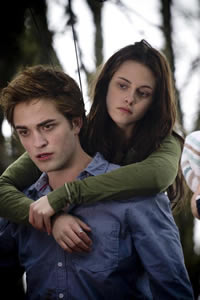 Edward Cullen of Stephanie Meyers’ Twilight fame has captured many hearts and minds. I’m not a big fiction buff myself, especially when it comes to things like vampires. But there is definitely something profound for young and old, male and female alike to learn from Edward Cullen.

As a marriage educator, I’m all about strengthening marriages, so after reading a recent article entitled, ” What Girls Want: An Edward ” it got me thinking about how important some of Edward’s character traits are, not only for our youth going through the potentially treacherous teen years, but for those of us who have moved on into marriage as well.

There’s no shortage of swooning young women who think Edward is all that, but I wonder if the adoration isn’t less about his mysterious eyes and swoopy hair and more about what he is willing to do (and be) for his beloved Bella. Edward Cullen epitomizes self-restraint and mastery over self.

Edward’s nature (as a vampire) is to eat Bella for dinner. But instead he has incredulously taken on the task of her guardian and protector. It’s like a lion falling in love with a lamb. Thankfully for Bella, Edward comes from a family who has not only taught him to control his deadly appetite, but helps him do so as well.

Though I have not read the Twilight books, I did go see the movie when I began writing this article. What has me so enthralled with Edward’s character is his sacrifice and self-discipline, especially because it goes so against his natural wiring.

When Bella asked Edward why he has chosen the path that he has, he responded that he doesn’t want to be a monster-apparently regardless of the formidable cost to him.

Curiously, he acknowledges finding strength in the self-restraint, even though he is never fully satisfied.

I can only imagine how Bella or any young woman would see such a personal sacrifice being made on her behalf. If that isn’t breathtakingly attractive, then I don’t know what is.

It’s little surprise to me that when Edward asks Bella, “Do you trust me?” there is no hesitation. How could you not willingly give your whole life and anything else he wanted, knowing full well he would never take or do anything that would hurt you?

With a level of character and commitment seldom seen, Edward reminds himself, and Bella as well, that he can never lose control with her, as it would be simply deadly.

To me, the most poignant part of the movie was when Edward, with his father at his side, had to take on the impossible task of saving Bella’s life by sucking the venom out of her without taking too much of her blood. I felt cautiously comforted knowing the father was there, attentive to the inordinate challenge that Edward faced.

Lucky for Edward (and Bella), Edward’s father was on hand with his experience, strength, and wisdom at a critical juncture. He was there to implore Edward to resist once Bella’s life had been spared.

My heart stopped beating as the immensity of Edward’s predicament and the father’s words penetrated my heart, “Enough! Remember who you are. Stop Edward! Find the will to stop!”

What an incredible force for good would exist if our young men would take on the task of mastering their appetites and passions, and to stand strong in their rightful place as guardians of virtue and moral protectors.

How much easier the task would be if parents would actively engage themselves in helping their sons develop such self-mastery.

Parents and youth are not alone in such a tremendous undertaking. This kind of self-mastery, unselfishness, and trustworthiness are possible only with a conscious and constant partnership with God.

Society likes to tell us that boys will be boys, and men cannot help themselves, while assigning women the responsibility of protecting virtue. That is not God’s plan.

Particularly in the case of youth, young women often do not yet fully grasp the power of the sex drive, nor their role in its cultivation in young men. They need the experience and wisdom of their parents to safely guide them.

Parents play a vital role not only in helping young men master their God-given desires, but also in helping young women to not detract from that effort or make it needlessly more difficult.

Self-Mastery and The Marital Fire

The characteristics of self-discipline and selflessness profoundly affect marriage, and more specifically the intimate relationship. One of the interesting dynamics of the sexual relationship involves the ironic dilemma of the wife’s primary challenge being to awaken and cultivate her sexual desire, while the husband’s pressing challenge is generally to bridle his passion.

The bridling of his passion is no small task, with no small consequence. His self-mastery and attentive focus on his wife’s needs are vital ingredients in the percolating potential for intimate bliss for both himself and his wife.

For a woman to look into the eyes of the one she loves and see not only a delicious hunger, but also the power of his restraint is a grand gift indeed. A man’s self-mastery is not only incredibly attractive but also incredibly sexy.

Lovemaking might well be likened to a fire. In the presence of fire, a woman must first feel safe and assured that someone is in control of the fire, before she can let go and surrender to it-a necessary step for her fulfillment.

If the man does not have the will nor the discipline to master his desires, she will instinctively stay on duty keeping watch over the fire while he ventures off on his own flight of ecstasy.

Because a man’s greatest bliss is intimately connected to his wife experiencing her bliss, his self-mastery represents no small sideshow in the symphony of sexual love.

In God’s divine design I believe men are chosen as the principal keepers of virtue, but only if they have mastered their own desires. I can’t help but wonder if within a man’s self-mastery there lies hidden treasures and exultant joys hitherto unknown.

I don’t hesitate to suggest that a man’s mastery over his sexual desire is likely the single greatest source of his strength, especially if he turns to God in his efforts to put off the natural man.

I think God deliberately made man’s sex drive as He did, not only for the purpose of bringing a man and a woman together to marry and create life, but also as man’s greatest tutor, beckoning him to master this power rather than allowing it to become a monster that masters him.

Putting off the Natural Man

God’s directive to Abraham to sacrifice his son Isaac may be likened to that which God asks of us. Though difficult and heartrending, with faith, trust and obedience Abraham would nevertheless obey.

Many men struggle mightily not only with sex-related addictions, but also with the inevitable differing desire of their wives.These challenges provide unparalleled opportunities for men to come unto Christ and be perfected in Him, and to deny themselves of all ungodliness (see Moroni 10:32).

I imagine we all struggle with some thorn of the flesh obscuring our divine identity like a mortal overlay. Part of our job here on this earth is to overcome our mortality and put off the natural man.

The natural man (or woman) is an enemy to God and will be forever unless we yield ourselves to the enticings of the Holy Spirit, and become a saint through the atonement of Christ (see Mosiah 3:19).

If men will deny themselves of all their ungodliness, and love God (more than their favorite self-indulgence) with all their might, mind and strength, then God’s grace will be sufficient for them.

God gives us weaknesses and mortal challenges to invite us to repent and humble ourselves before Him, and to believe in the power of Christ to sustain and even heal us. With humility and faith in Christ it is enough for God to make our weak things become strengths (see Ether 12:27). Through God’s grace, man (and woman) may be perfected in Him (see Moroni 10:32).

We may truly feel inflicted by our mortal weaknesses. But God, nevertheless, asks that we become as a little child, obedient and submissive to Him, meek, humble, patient, full of love, willing to submit to all things, which the Lord seeth fit to inflict upon us (see Mosiah 3:19).

Satan, too, sees the potential for great power if we stay in our “natural man” selves. He skillfully takes advantage of man’s makeup to ensnare him with pornography, infidelity and other addictions, keeping man from the very thing that can give the greatest joy and peace.

He’s pretty good at snaring women as well! He seeks to enslave us all and bind us down to endless misery. But if we seek out God as our source of strength and sustaining, our weaknesses can truly become our strengths.

Trust as the Foundation in Marriage

At the core of a strong marriage is trust. Trust comes from self-mastery. Self-mastery at any point in our lives provides protection for the future. Self-mastery secures the trust between a husband and wife, protecting both from perilous influences.

One can only imagine the heartbreaking struggles that come to those who must grapple with the devastating effects of pornography, infidelity or other addictions. The soul of the marriage is shattered. Trust is destroyed, leaving questionable hope that it can ever be restored.

When trust has been broken, the painful process of rebuilding trust is very difficult, but essential…and possible. The relationship can be restored to a place of peace, and with concerted effort and divine intervention, God can even make the marriage stronger than it was before.

Yes, there is much we can learn from the character of Edward Cullen.

Exquisite efforts at self-mastery coupled with a willingness to protect rather than destroy make him an easy object of admiration. But it’s not really about him for me. I’m inspired by what his character traits could add to our lives, and how it could strengthen our marriages.

I challenge each of us to consider how self-mastery might bless our lives. I especially challenge men everywhere, young and not so young to consider their role as guardians of virtue and keepers of the fire.