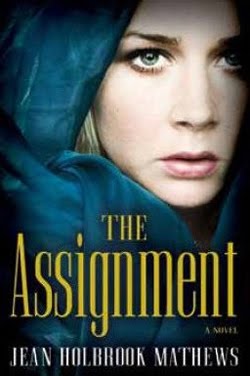 Taking a departure from her popular historical fiction novels, Jean Holbrook Mathews, has written a contemporary suspense novel, The Assignment, which will keep readers on the edge of their seats from cover to cover.  Set in the Philippines, this story revolves around three central characters: Sophie, a young registered nurse who is kidnapped from a shopping mall along with her Filipino friend; Julia Wentworth, a senior employee of Sophie’s grandfather; and Diego Montalbon, a Metro Manila police detective.

When Sophie is kidnapped by an Islamic terrorist group, her grandfather sends his respected employee, Julia, to the Philippines to organize her rescue.  She arranges for Montalbon (Monty) to lead the rescuers. He hires three men he trusts and who have received training in American military procedures.  Arrangements are made for Julia to wait with some of Monty’s relatives. An unknowing careless act lands Julia in the hands of the terrorists too.

Sophie finds herself one of five hostages being held by the terrorists, but unlike the others, she was taken because of her nurse’s uniform.  The son of the leader is dying from an untended bullet wound and Sophie is supposed to save him.  The others are to be ransomed.  Sophie is careful to keep her identity as the granddaughter of a wealthy man secret.  She soon learns how little value her captors place on lives other than their own and she continually runs up against their disregard for women and nonbelievers of their faith.

Though equipped with the latest electronic field gear, Monty and his men endure a grueling trek, often at odds with local military groups hunting the terrorists.

Both Julia and Monty are thrown into this dangerous situation while struggling to come to terms with problems in their own lives. Julia’s husband died of a sudden heart attack in his forties and one of her three children lies in a vegetative state in a hospital.  Monty lost his wife and son in a tragic way and has sent  his daughter to live with relatives in America to keep her safe. They form a close bond and gain firm respect for each other, but readers will be disappointed if they’re expecting this novel to be a romance.

Mathews put a great deal of research into the background of this story and portrays well the racial, religious, cultural, and economic differences found in the Philippine Islands, a place where the combination of Spanish, American, and Asian influences are sometimes confusing. She also handles well the problems that arise with eight major languages and over a hundred dialects.  Adding to the chaos is a national epidemic of corruption where bribery is taken for granted, there are huge numbers of unemployed resulting in large scale poverty, and the rugged terrain which makes pursuit of the perpetrators of crimes extremely difficult.  Added to all this are the clashes of political and religious philosophies, the worst of which is Islamic radicals who operate more as cut throat thugs than as adherents to a world religion.

The fascinating details of the beautiful Philippine Islands are woven into the story and do not dominate it.  The story holds center stage and moves at a rapid pace with enough action to satisfy the most rabid action fans.  Some of the similarities of names is a little confusing, but overall The Assignment is a well-crafted adventure/suspense novel that will be enjoyed by both men and women.

The author, Mathews, has been interested in history and geography all of her life.  She served for many years as the administrative director of an international foundation such as the one her character, Julia, worked for.  It served five countries, including the Philippines.  She lived in the Philippines for two years while serving an LDS mission with her husband.