Power in the Marriage Sealing

(Note: This article is adapted from Rescuing Wayward Children. Follow this link to learn more.)

Who can comprehend the saving power of parents’ love? But that power pales in comparison to the powers unleashed when the parents live so that their marriage is sealed by the Holy Spirit of Promise.

For single parents and those wishing to be sealed in the temple, this can be a painful reminder. However, though this article deals specifically with the power given to married couples who are sealed in the temple, many principles apply to singles, single parents, those working for eternal union with less-active spouses, and to children who are praying for their wayward parents.

Faith and grace allow us to act as if we were in possession of that which we lack and to do all that we can do with the assurance that the Lord will make up the difference.  Attesting to the truth of this comforting fact, President Spencer W. Kimball said all faithful members would “not be deprived of any blessings which they might have received if they had lived up to all of the commandments with which they could comply.”[1]

The Power of the Marriage Sealing

Love between a husband and a wife can be welded into an unbreakable link by the temple marriage covenant. If a couple lives true to that covenant, they can become one in word, purpose, and deed. That quality of oneness is the ultimate unity necessary to obtain redemptive blessings in behalf of our children.

While the temple experience teaches us that the sealing of parents is initially provisional and based on subsequent obedience,[2] we also are aware that no such qualifying language is used when a child is born in the covenant or when a child is later sealed to his parents. This fact suggests that the Lord intends for the child to belong to the parents forever.

President Joseph Fielding Smith said, “Those born under the covenant, throughout all eternity, are the children of their parents. Nothing except the unpardonable sin, or sin unto death, can break this tie. If children do not sin as John said, ‘unto death,’ the parents may still feel after them and eventually bring them back near to them again.”[3]

The prophets have stated repeatedly that the calling of parent is one from which we are never released.[4] Such is the incredible power of the sealing ordinance. The covenant entered into and the sealing pronounced on a couple married in the temple create a patriarchal hold that secures children to their parents forever. The sealing of children to parents gives children the inalienable right to be offered all the blessings of the new and everlasting covenant. Moreover, the sealing has the power to draw children toward those blessings.

Sealed by the Holy Spirit of Promise

A covenant marriage in the highest sense will begin as a temple marriage. When the partners are then sufficiently righteous, the marriage will be sealed by the Holy Spirit of Promise (D&C 132:7), “which the Father sheds forth upon all those who are just and true” (D&C 76:53). Such a marriage will then be not only eternal in duration but also celestial in quality, for it will be a marriage that partakes of God’s quality of life.[7]

President James E. Faust made one of the clearest statements on the subject: “When the covenant of marriage for time and eternity, the culminating gospel ordinance, is sealed by the Holy Spirit of promise, it can literally open the windows of heaven for great blessings to flow to a married couple who seek for those blessings.”[8]

The sealing of the Holy Spirit of Promise is contingent upon our faithfulness to our covenants. Although marriage is an important step toward exaltation, it is not the ultimate step. Elder Bruce R. McConkie wrote, “It should be clearly understood that these high blessings are not part of celestial marriage. ‘Blessings pronounced upon couples in connection with celestial marriage are conditioned upon the subsequent faithfulness of the participating parties.’”[9]

In the final analysis, for marriage (or any saving ordinance) to have the greatest power, it must be sealed by the Holy Spirit of Promise.

If a man and a woman marry in the temple, thereby entering into the patriarchal order of the priesthood,[10] and then remain worthy so that their marriage is sealed by the Holy Spirit of Promise,[11] they are given greater power from on high to ask for and receive the highest blessings.

Speaking of the great blessings that flow to the children by the power of their parents’ marriage sealing, Joseph Fielding Smith wrote:

These keys hold the power to seal husbands and wives for eternity as well as for time. They hold the power to seal children to parents, the key of adoption, by which the family organization is made intact forever. This is the power which will save the obedient from the curse in the coming of the great and dreadful day of the Lord. Through these keys the hearts of the children have turned to their fathers.[13]

So the key to rescuing our wayward children lies not only in our striving to be unified, but to be unified with respect to our covenants. Elder Russell M. Nelson wrote: “As you obey each of God’s commandments, your holiness will fortify the foundation of your fathers’ faith. When the two of you are together spiritually, one plus one is clearly greater than two.”[14]

Following is a story of a Nevada couple who followed this advice.

When “James” was a teenager, he set about to self-destruct in record time. “Thomas and Alyssa,” his parents, were helpless to halt or alter his determination. A bad group of friends introduced him to alcohol and later, tobacco. When he began to fail badly in school, Thomas and Alyssa tried to help him with a tutor, but James soon lost all interest. Later, he dropped out of school, and later still, when Thomas and Alyssa had laid out a simple set of rules that James would not abide, they asked him to live elsewhere.

By that time, he was using and selling drugs, stealing from his parents, and having frequent run-ins with the law. At one point, James was incarcerated for a year, but when he was released he continued with his destructive behavior.

To deal with the problem, Thomas and Alyssa did something remarkable: they pulled together as a couple. They renewed their marriage by frequent dating and trips. They increased their temple attendance, and they put more energy into their couple prayers. In the midst of one of the worst trials of their lives, they reacted by loving each other and God more.

Throughout these years of intense stress and heartbreak, Thomas and Alyssa kept in contact with James and assured him of their love for him. Thomas said, “Alyssa and I didn’t know what else to do. In the beginning, we prayed because that was all we could think to do. But over time, we discovered that parental prayer is a sort of right God gives fathers and mothers. We didn’t even know that we had such a right until we noticed our prayers being answered in miraculous ways.”

At one critical moment, James had moved to a new city and had no place to room. His parents knew that his decision would make or break him. His history had been to live with the low-lifes of society—jobless and hard partying, alcoholics and drug users. Now he was faced with a similar decision, and Thomas and Alyssa went to their knees. They pled with Heavenly Father to help James find an LDS person to live with. Within the week, James called and said that he had made a friend of a returned missionary who had invited him to be his roommate. James stayed with this young man until his next crisis.

Later, James called his father and announced that he and a woman with whom he had been having an affair, were going to buy a condo so they could live together. Despite Thomas’s stern counsel discouraging this, James had stubbornly made up his mind and once again announced that he was going to do things his way. Thomas and Alyssa went to their knees and prayed that something would happen to give James another choice.

Within the week, James called to tell his parents that the woman had broken up with him. He was hurt, but he had begun to date an LDS girl. Within a short period of time, James and the girl fell in love and wanted to get married. She had set her sites on a temple marriage, and that made James reconsider his life. He asked his father to give him a blessing. James went to his bishop, confessed, and gave up all his bad habits. The young woman was willing to wait for James as he completed the repentance process, and after a year, they were married in the temple. Of this miracle, Thomas and Alyssa said, “Couples may not know the power that God puts into their hands. A couple that has truly become one can sincerely pray for their children, and miracles will happen. That oneness calls forth a power we had never thought possible.”

Without the Sealing, All would be “Wasted”

Thus, although love may motivate a man and woman to enter into marriage, only God has the power to truly make them one. Moroni revealed to Joseph Smith the sobering fact why this welding link—a temple sealing and subsequent sanctification—must be in place to make a couple (and their progenitors and children) one: so that “the whole earth [would not] be utterly wasted at [the Lord’s] coming.”[15] Robert L. Millet gives us further insight into this idea of the earth’s being wasted:

Why would the earth be wasted at his coming? Because the earth would not have accomplished its foreordained purpose of establishing on its face a family system patterned after the order of heaven. If there were no sealing powers whereby families could be bound together, then the earth would never “answer the end of its creation” (D&C 49:16). It would be wasted and cursed, for all men and women would be forever without root or branch, without ancestry or posterity.[16]

With the merciful gift and commandment of having our marriages start at temple altars, righteous parents are made one by God and sealed together with His unbreakable welding link. Then, as we faithfully persevere in our covenants, the Holy Spirit of Promise seals our marriages more surely so that the welding link that was set in place at the altar will never fail.

The children who issue forth from this union—or who are sealed into it—are surely secured to us by virtue of that same, sure weld. Despite their rebellion, they cannot break free. The power of their parents’ oneness, which was set in place by God and made sure by the Holy Spirit of Promise, has the power to hold onto the children and eventually reel them back.

Note: This article is adapted from Rescuing Wayward Children. Follow this link to learn more.

Also, to receive a sample of my new 5-book series, The Three Pillars of Zion, Click here. 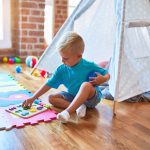