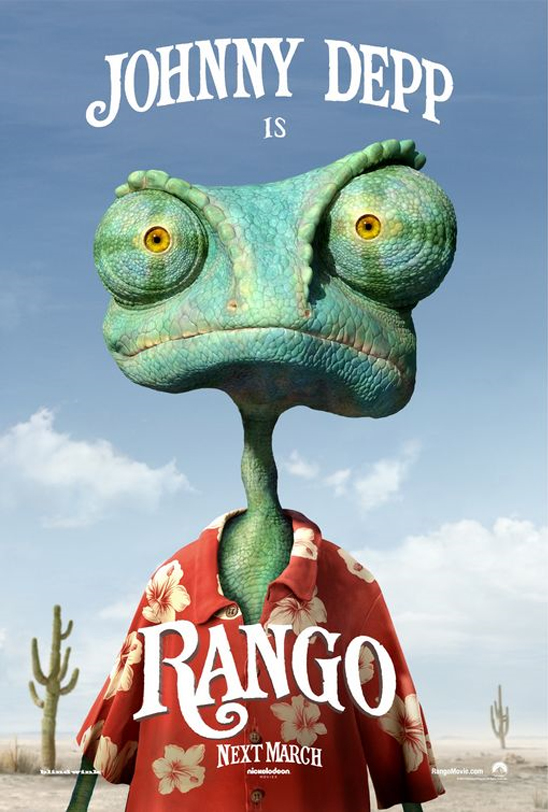 REVIEW: Don’t let the ads fool you: Rango is a Western first and a family film second. The film is almost entirely devoid of cuteness; in its place is a gritty and psuedo-realistic portrayal of the American West. The landscapes are desolate, harsh, yet beautiful, and the same can be said of the characters. Like True Grit a few months ago, Rango reveals the beauty and unsentimental goodness of some characters who, on the surface, appear to be callous roughneck survivalists.  And make no mistake, there are a slew of ugly characters here.

The film finds Johny Depp (doing excellent voice work) as a wimpy pet lizard facing an identity crisis. Fate finds him stranded in the harsh desert, where he pretends to be a tough lawman to impress the locals, only to have his facade crumble when a drought and genuine outlaws come to call. His journey from zero to hero provides a surprisingly engaging character arch. The animation is amazingly rich with detail, the morbid humor is genuinely funny, and the action sequences are thrilling. If the film has a flaw, it’s its pacing: it sags in the middle, is easily 20 minutes too long, and begins to bore. The finale however, rich in iconic Western imagery, humor, and action, hits the bullseye.

CONTENT ADVISORY: Rango is rated PG for a reason. There’s a real danger and menace to some of the scenes that will likely be too intense for small children (or adults with a snake phobia). It also has a fairly macabre and dark sense of humor, as well as a few light innuendos (none as crass as, say, Shrek). Also, the screenplay is lightly peppered with “hells” and “damns,”which authenticates it as a Western (as does the gunplay) but may concern parents of children who repeat what they hear. Concern has been expressed about the depictions of smoking in the film.

MESSAGES TO DISCUSS: People who use, deceive, and take advantage of others will face justice (Psalm 7: 14-16). Those who boast to impress people will be humbled, while those who dedicate their lives to the well-being of others become truly heroic (Matthew 23: 11-12).

FOR MORE MOVIE REVIEWS, AS WELL AS FUNNY VIDEOS, CHECK OUT MY WEB SITE: www.mormonmovieguy.com