Missionary Moment: Please Stand by Me

Mark Albright is the president of the Washington DC South mission and shares these missionary stories with Meridian Magazine.  This letter comes from Elder Jeffrey Packer. 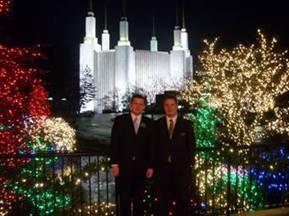 It was just past 8:30 p.m. when we finally reached our car after a long day of work in Oakton, Virginia. We lived outside of our assigned area so we needed to head straight home to make it in on time since it was a thirty minute drive.  As we pulled into the street, Elder Clinger and I had a prompting that we needed to visit a less active member a bit out of our way.  Although we were tired and anxious to be home we knew what was best.  In route to her home I had an urge to go to the 7-11 store.  All week long I had been craving a Slurpee so I dismissed the thought as nothing but a sweet tooth.  “You don’t need junk food this late at night!” I told myself. We drove another block and I had the same thought again. “Go to the 7-11.”   “But we have someone to visit right now,”  I countered, pushing the idea out of my mind once more.  After passing the 7-11 we sat waiting at the stoplight only a few hundred yards away from the convenience store. The urge came again but this time stronger. “GO TO SEVEN ELEVEN”  “Why?  I thought to myself, somewhat annoyed that the urge wouldn’t leave me alone.  What is it that you want?”  As I took inventory of my feelings, I decided I was not having a slurpee attack at all.  It was then that I recognized the possibility that the Lord was giving us a detour to do something more important.

I discussed it with my companion and we agree to turn around. There was a raised median in between us and the 7-11 so we had to pass it and make a u-turn at the next intersection.  As we did so we noticed a woman standing alone in the dark at a bus stop.  Elder Clinger thought he recognized her as a nonmember we had met  before. We pulled into the 7-11 and were able to park only about 60 feet from the bus stop.  “Hello miss!”  I said as we approached. The young woman jumped back in fright.  Elder Clinger introduced us as missionaries and apologized for startling her.  “You are really missionaries!?”  She appeared relieved.  “Yes ma’m,”  I replied.  “You seem surprised.”  She then explained that she had been praying only minutes before that God would send someone to stand by her until the bus arrived.   “It’s a shady part of town.  Several men passed me twice.  I didn’t like the looks they were giving me.”

We related the events which led us to her and she was amazed at how her prayers had been answered.  We talked a bit and discovered that she was a college student studying theology at St. Mary’s campus in Maryland.  She had come to babysit her niece for the day and was on her way back to school, but it was much later than she had planned.  She was afraid to be out alone in this neighborhood at night.   We stood by her on the sidewalk and discussed the gospel and the Restoration for about fifteen minutes until her bus finally arrived.  I am sure that the next time missionaries contact her, she will recall this experience and recognize them as servants of the Lord.

For the rest of the drive home Elder Clinger and I rehearsed each step of the experience and marveled at how every thought, every turn and every light was perfectly timed and aligned to complete the miracle.  The moment Elder Clinger and I walked through our apartment door we knelt down and thanked our Father in Heaven for the opportunity to be missionaries and to help answer someone’s prayers.

Thanks for all you do!