The young genre of Mormon Cinema has had a rapid, if inconsistent, evolution. Since its inception roughly a decade ago with God’s Army, Latter-Day Saint filmmakers have attempted to portray the doctrines and culture they love via many styles of storytelling. There have been romantic comedies (The Singles Ward, Pride and Prejudice), romantic dramas (Charly), a murder mystery (Brigham City), a World War II action film (Saints and Soldiers), a multimillion-dollar epic travelogue (The Other Side of Heaven), historical fiction (The Work and the Glory trilogy), buddy comedies (The Best Two Years), sports movies (Forever Strong), compelling documentaries (New York Doll) and excellent dramas (States of Grace). For every one good example, like those just mentioned, there were three or four whose execution was mediocre at best and terrible at worst. The market got oversaturated and box-office returns grew dismal. It seemed that the once-promising genre was dying a slow death. Some very good films got lost in the shuffle, overlooked by LDS audiences tired of paying full price for disappointment. 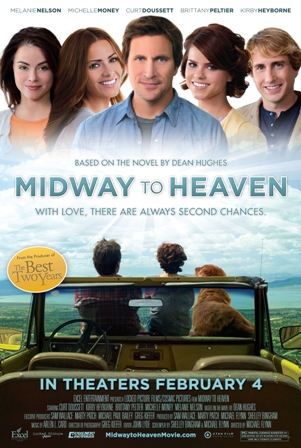 In the past few years, however, I would say Mormon Cinema has finally found its stride. Blissfully on the decline are the quickly-and-carelessly produced “culture comedies.” In their place have come a string of handsomely produced, well-acted dramas. Their ambitions and budgets are neither as high nor as low as the extremes that have come before them. These films are content to tell simple stories (but tell them very well) all while displaying the gentle beauty of LDS doctrine and culture. Films such as Emma Smith: My Story, as well as Errand of Angels and One Good Man, remind me of a vocal performer singing in sacrament meeting: rather than belting out a stadium-style anthem to showcase their talents, they sing a sweet and simple melody with beauty and sincerity.

Such a film is Michael Flynn’s Midway to Heaven. Based on Dean Hughes’ novel of the same name, this romantic dramedy finds a middle-aged widower entering the dating-for-marriage scene and resenting the fact that his daughter is doing the same. It’s a nice balance of Father of the Bride-style comedy, mature romance, and family drama, and the actors are all up to the task. Curt Doussett, as the widowed father, has the square jaw and muscular build of a movie star, which makes his everyman charm and very good comedic timing a welcome surprise. The movie’s greatest strength is his chemistry with the apparition of his deceased wife (played by Melanie Nelson). He still talks with her, years after her death. The film wisely decides to play these conversations matter-of-factly, without clarifying whether she’s actually a spiritual manifestation or simply a mental projection of his heartache. Doussett and Nelson have the warmth and familiarity of a long-and-happily married couple. Her concern for his happiness, as well as his longing and affection, feel palpable and real. 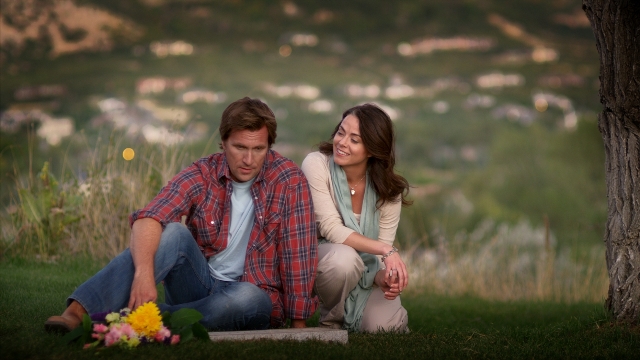 Brittany Peltier, as the daughter, while not required to do as much dramatic heavy lifting, displays peppy confidence onscreen and is totally convincing. Kirby Heybourne, who is the closest thing the genre has to a bankable star, is reliably solid. Here he wisely decides to reign in the comic hamminess that defined some of his earlier roles. Rounding out the cast is Michelle Money, as Doussett’s divorcee love interest. Money, currently making the rounds on TV’s The Bachelor, initially is given little to do and seems to be the weakest link, cast merely for her looks. As the story progresses, however, the script allows her to reveal a dash of spunk, warmth, and pain which, while not requiring much of a stretch, reveal that she does have some acting talent.

On a technical level, the film is solid. John Lyde’s editing and Arlen Card’s music compliment the story well. One of the real treats of the movie, it must be said, is Greg Kiefer’s cinematography. I can’t remember another film that captured the beauty of central Utah in such an eye-catching manner. 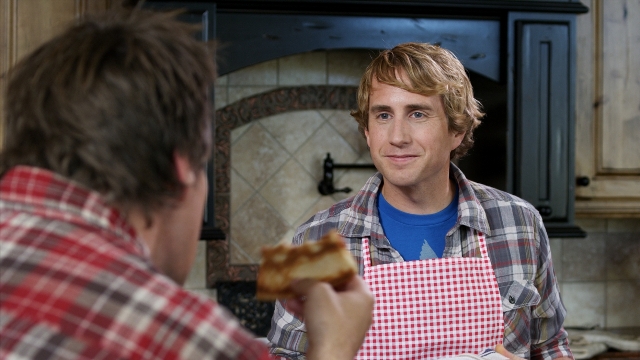 The films only weaknesses lie in pacing and missed opportunities. While there is some overlap between the “daughter-dating” and “moving on with a new love” storylines, the one really only starts after the other is mostly finished, making the film feel like two separate episodes rather than one story. Also, for a film that’s clearly taking place among Latter-Day Saints (the script is laced with references to bishops, missionary service, and church callings), it is strangely silent on the importance of faith in the character’s lives. Aside from brief song lyrics during a montage, there is no mention of God or Christ in the film that I recall. Even if the filmmakers were trying to avoid preaching, they could have portrayed the character’s beliefs in a way that was merely a realistic portrayal, such as the prayer for help uttered by the Sheriff’s secretary in Brigham City. That moment wasn’t an attempt to convert its audience, but neither did it hide how such a character would act in that circumstance. Midway to Heaven could’ve benefitted from such a scene. As it is, audiences not of our faith get a look at Mormon culture, but not at what truly drives us: belief in Christ.

These are minor complaints, however. This is a poignant, funny, and wholesome film that will delight families and individuals looking for something uplifting. It’s well made and well-acted, and is a fine example of the types of stories LDS filmmakers are capable of bringing to the multiplex.