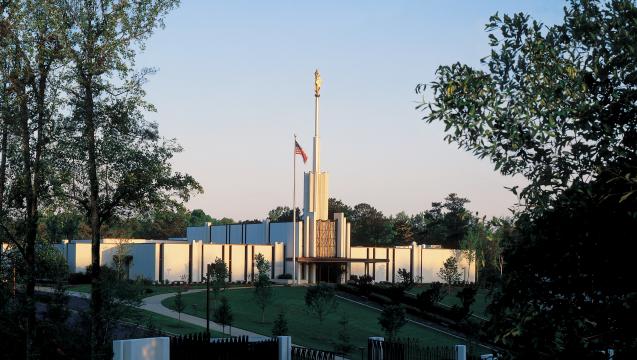 The First Presidency of The Church of Jesus Christ of Latter-day Saints has announced open house and rededication dates for the recently renovated Atlanta Georgia Temple.

The temple was closed 1 July 2009 for renovation. Among the changes was the addition of large windows in the celestial room, adding more natural light, and art glass windows in other parts of the temple.

The public is invited to visit the temple during an open house from Saturday, 9 April 2011, until Saturday, 23 April 2011, excluding Sundays. The temple will be formally rededicated on Sunday, 1 May 2011 in two sessions. Both of the rededicatory sessions will be broadcast to congregations of the Church within the temple district.

In conjunction with the rededication of the temple, there will also be a cultural celebration featuring music and dance on Saturday, 30 April 2011.

The Atlanta Georgia Temple was originally dedicated 1 June 1983 by President Gordon B. Hinckley, then a counselor in the First Presidency. He rededicated the temple baptistry in 1997 as president of the Church. The temple serves more than 50,000 Latter-day Saints living in and around Georgia.

The temple is located 25 miles northeast of the Hartsfield Atlanta International Airport.

Latter-day Saint temples differ from the Church’s meetinghouses or chapels where members meet for Sunday worship services. Temples are considered “houses of the Lord” where Christ’s teachings are reaffirmed through marriage, baptism and other ordinances that unite families for eternity. In the temple, Church members learn more about the purpose of life and strengthen their commitment to serve Jesus Christ and those around them.

Formal temple work will commence in the temple Tuesday, 3 May 2011.