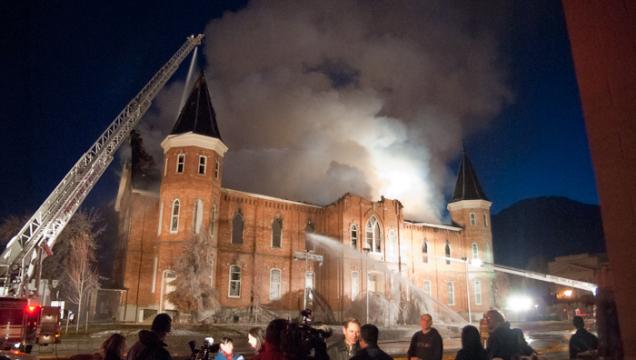 Tears streamed down the faces of onlookers as the Provo Tabernacle was embroiled in a fire that was reported at 2:43 a.m. last Friday and still had hot spots 24 hours later.  Twenty-five firefighters poured water on the flames, but the roof began collapsing around 5:00 a.m. and fell in an hour later.

The cause of the fire at this point is still uncertain, but the LDS Church reported on its website that the fire appears to have started on the second floor.

The Provo Tabernacle has not just been a landmark, but also a tribute to the sacrifice and vision of pioneers who lovingly built it as a symbol of their community.  Its stately contours, its intimate feel, its fine craftsmanship by masons, carpenters and glaziers all point to a heritage that is sweet and important to Latter-day Saints.  The loss of this building is tragic, like ripping the heart out of a community.

Some described it as what buildings look like that have been bombed in a war.

Begun in 1883 and constructed at a cost of $100,000, this tabernacle has been the scene of conferences, graduations, and important events of every kind, whose memory will linger.

The Church of Jesus Christ of Latter-day Saints issued the following statement regarding the fire:

“The fire at the Provo Tabernacle is tragic. The building not only serves our members and the community, but is a reminder of the pioneering spirit that built Utah. The damage appears severe, and until we make a structural assessment we won’t know whether this historic treasure will be able to be saved.”

Photographer Kjirstin Youngberg was on hand to take pictures of the Provo Tabernacle as flames and smoke leaped from it. She shares these photos here along with this personal lament:

“The fire was personal to me. I’m a descendant of Benjamin Cluff, who settled that part of Provo, then gave up his lands when the Church requested them to build the tabernacle. My ancestors helped build it. Twice. My sister, Jill, accepted her Master’s Degree from BYU there. I attended funerals for my dear friend Sandy Hirsche and her husband, Blayne, who died in a plane crash in 2002, as well as Truman Madsen’s. My husband, Eric, sang in choirs and played his flute there. It’s like losing a very large and comfortable friend whom I expected to always be there for me. It is a sad reminder of the things we get to return to heaven with some day…only our love stays forever.”