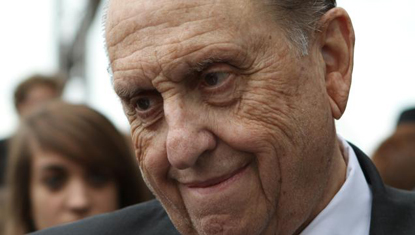 The year 2010 marked another important and historic year for The Church of Jesus Christ of Latter-day Saints. Milestones were reached internationally with the dedication of the first temple in the former Soviet Union, the groundbreaking for a temple in Europe’s eternal city and high-level discussions with the government of China.

History in the Making

In August, President Thomas S. Monson dedicated the Kyiv Ukraine Temple. The temple will serve 31,000 Latter-day Saints living in nine European countries. During the cornerstone ceremony President Monson exclaimed, “There is a nice spirit here among you. There is no place else I would rather be.”

Two months later, President Monson officiated at the groundbreaking for the Rome Italy Temple. The Church will build the temple on a beautiful 15-acre site in the community of Settebagni, Rome. When completed, it will serve more than 23,000 Church members living in Italy and in neighboring countries.

The Church and an official of the People’s Republic of China culminated a series of high-level meetings in August aimed at “regularizing” activities in China for practicing Latter-day Saints. Church spokesman Michael Otterson said, “The Church deeply appreciates the courtesy of the Chinese leadership in opening up a way to better define how the Church and its members can proceed with daily activities, all in harmony with Chinese law.”

Known for its humanitarian response during disasters, representatives of the Church were in Haiti within hours of the devastating January earthquake, assessing needs and delivering water, food and supplies. The Church continues to help stabilize life in Haiti regardless of whether those affected are Latter-day Saints or not.

Chile was struck by an earthquake just a month after the one in Haiti. The epicenter of the 8.8 magnitude earthquake was located off the central coast of Chile. Local Latter-day Saint leaders began assisting with food and water. A Mormon missionary serving near the epicenter described his experiences.

Flooding in Pakistan in August resulted in more than a thousand deaths and millions more affected by the devastation. The Church assisted in relief efforts with other international organizations. In September His Excellency Husain Haqqani, Pakistan ambassador to the United States, made a brief stop at The Church of Jesus Christ of Latter-day Saints headquarters to thank President Monson and the entire Church for its help.

In July, Boyd K. Packer, President of the Quorum of the Twelve Apostles, was assigned to his hometown to break ground on the Brigham City Utah Temple. The temple will face the historic Brigham City Tabernacle on the city’s main street.

The Church unveiled a scale model of the Salt Lake Temple to provide people with a temple open house experience. The 88-inch tall, near-identical replica of the temple is a permanent exhibit in the South Visitors’ Center on historic Temple Square.

At year-end, the Church operates 134 temples, with another 18 announced or under construction.

The Mormon Tabernacle Choir marked 100 years of recording, and the choir’s weekly program of Music and the Spoken Word was inducted into the National Radio Hall of Fame. The choir reached the recording milestone at exactly 8:00 p.m. on 1 September 2010. Among the major achievements of the choir are five gold and two platinum records and a Grammy for “Battle Hymn of the Republic.” The National Radio Hall of Fame honor is for Music and the Spoken Word, the longest running nationwide radio broadcast in the United States.

On 23 February, His Eminence Francis Cardinal George, O.M.I. addressed a capacity crowd in the Marriott Center at Church-owned Brigham Young University in Provo, Utah. Cardinal George explained that religious freedom cannot be reduced to just freedom of worship or even freedom of private conscience, but that individual and religious groups must have the right to exercise their influence in the public square.

Later in the year, Elder Dallin H. Oaks of the Quorum of the Twelve Apostles was the keynote speaker at the Constitution Day celebration held in the Tabernacle on Temple Square. Elder Oaks suggested every citizen should understand the Constitution, support the law, practice civic virtue, maintain civility in political discourse and promote patriotism.

New General Authorities were called and the Primary general presidency was reorganized during the April general conference of the Church. Changes were made in the First and Second Quorums of the Seventy.

The Presiding Bishopric of the Church introduced the latest environmentally friendly construction efforts by the Church by unveiling the Church’s first solar-powered meetinghouse in the Northern Hemisphere. The new building in Farmington, Utah, symbolizes the continued innovative use of technology by the Church in its construction design.

Lay Church leaders throughout the world were introduced to a set of two new handbooks in November to help manage the increased workload due to the rising membership. Thomas S. Monson, president of the Church, has said that as the faith continues to grow and more lay leaders need to be trained, it is important to maintain the integrity of policies, procedures and programs contained in the handbooks.

The troubled economy and growing unemployment rates have been on the minds of many. The Church launched a new website in April to help people become employed. The interactive site at ldsjobs.org allows job candidates and prospective employers to connect directly. Job seekers, regardless of religious affiliation, can find employment, improve skills and refine their resume.

Thousands of genealogy enthusiasts from around the country came to Utah for the National Genealogical Society 2010 Family History Conference. In addition to lectures and presentations, conference participants enjoyed an evening of music from the Mormon Tabernacle Choir and addresses from President Henry B. Eyring, First Counselor in the First Presidency of The Church of Jesus Christ of Latter-day Saints, author and historian David McCullough and Jay Verkler, president and CEO of the Church-sponsored FamilySearch.

Continually seeking to improve its ability to provide information and resources to its members and others throughout the world, the Church made some major modifications this year to many of its official websites. In July it launched a revolutionary new version of Mormon.org, which includes thousands of profiles provided by individual Mormons. A significant media campaign raised the public’s awareness of the site.

Also in 2010 the Church launched a significantly improved version of its LDS.org website for Church members. The new site is a more interactive, visually appealing and navigable and the first major overhaul of LDS.org since 2007. The Church also redesigned and improved Newsroom.lds.org, the Church’s website for providing information to the news media and the public.

It was redesigned to provide greater flexibility and immediacy in locating news and information about the Church.

A popular Mormon historic site in San Diego, California, was dedicated in March. Church leaders participated in the event at the Mormon Battalion Historic Site, including Elder Jeffrey R. Holland of the Quorum of the Twelve Apostles, Elder Richard G. Hinckley of the Seventy and Elder Marlin K. Jensen, Church Historian and member of the Seventy.

A four-alarm fire gutted the historic Provo LDS Tabernacle in the early hours of the morning on 17 December. The meetinghouse was completed in 1898 and has been renovated four times, the last being in 1983. The building has been more than a meetinghouse for Latter-day Saints; it has been a community center for cultural and musical activities, lectures and conferences. The Church issued a statement concerning the loss: “The fire at the Provo Tabernacle is tragic. The building not only serves our members and the community, but is a reminder of the pioneering spirit that built Utah. The damage appears severe, and until we make a structural assessment we won’t know whether this historic treasure will be able to be saved.”