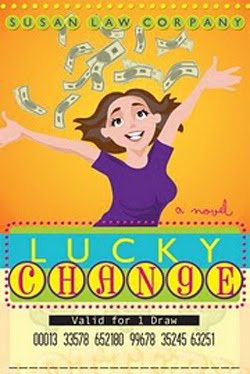 One of the most common fantasies people indulge in is that of suddenly becoming fabulously wealthy.  Many hours are wiled away dreaming of all the things that could be done with a million dollars, or five, or how about 230 million?   Susan Law Corpany in Lucky Change has played on this popular dream by taking Karen Donaldson from being the ward’s charity case to the ward benefactress, from “dirt poor to pay dirt.”

Karen is described as fifty pounds overweight, loud and out-spoken, wears gray sweats and teeshirts with advertising logos on them, and she has “a broad smile that could have put an orthodontist’s children through college.”  She has been divorced for twenty years, works at Smith’s Food King, and has two adult children who still have some growing up to do.  She also has a six-year-old granddaughter, a reminder of her daughter’s teenage indiscretion.  She also lives in a dingy basement in the wealthiest section of Salt Lake City.  She and her children have always been misfits in their well-heeled ward and the local schools.  Austin fought his way to a grudging acceptance, but poor Dee was the butt of every DI joke.  Even becoming an unwed mother at seventeen didn’t lead her to taking greater care in choosing companions or activities.  At twenty-three she has become an alcoholic and is dating a man with more tattoos and piercings than she can count.

So shocked by a friendly sales clerk who flirted with her when she stopped at a convenience store in Idaho for gas, Karen gave in and bought a lotto ticket.  And won $230,000,000.  She knows it was wrong to gamble so she goes right to her bishop to confess and pay her tithing.  She is further shocked to discover the Church won’t accept tithing on gambling winnings.  So what is a woman who is an embarrassment to her ward, prefers an old sofa held together with duct tape over buying a new one, owns a dog that piddles on the floor, and who drives a secondhand , rusty orange Volkswagen going to do with all that money?  Karen has ideas and fortunately her bishop is an attorney, who arranges for a little help for her.  “Maybe winnin’ the money ain’t a blessing exactly—the Lord probably ain’t the one in charge of the lotto—but I can still use it to do good,” she vows.  And lest anyone gets the idea that the book promotes gambling or even presents gambling in a positive light, it doesn’t.  The poorly conceived cover might, but the author’s story doesn’t.

Bishop Parley isn’t the only one offering to help.  Her kids have a few ideas and so does Dee’s boyfriend.  Marriage proposals and requests from dubious charities fill her mailbox.  Even her ex-husband, who walked out on her all those years ago, leaving her with a fussy two-year-old and a not-quite-one-year-old suddenly shows up.  The recession hits and once-wealthy ward members are feeling the pinch.  And Karen sees others’ misfortune as an opportunity to atone for her own lapse in judgement.

The book includes several fascinating subplots involving Karen’s children, Bishop Parley’s non- member secretary, and a few others.  There’s also a hilarious homemaking meeting lesson given by Karen on the finer points of housekeeping where she concludes with a reference to the saying, “cleanliness is next to godliness”  where she speculates “I just can’t picture Him sendin’ angels down to check for dust bunnies under my bed before He lets me through the pearly gates.”

Corpany has an off-the-wall sense of humor, that will keep the reader laughing.  The book is fun, light, well edited, and imaginative.  Karen and Bishop Parley’s secretary are the best developed characters in the book and the most likable, but the others are developed well enough for their roles and to keep the story from bogging down.  The point of view switches a few times where it probably shouldn’t, but it doesn’t hamper the story.  Though the story is funny, it does have a serious side and it is delivered well.

While reading Lucky Change, there were several places where I had to stop to read a passage out loud to my husband and we laughed together.  The book is aimed toward women, but I suspect more than one man will read it and chuckle.

Corpany lives in Hawaii with her husband.  Their six children are scattered across the western United States.  She is a sought after speaker for Relief Society socials and other groups and has written several motivational books as well as numerous articles for magazines.