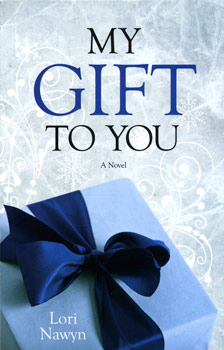 My Gift to You by Lori Nawyn is a quiet little book with a big message. It is the story of a woman, Trish Ingram, who feels a compulsion to be perfect and to be admired for the way she dresses, her beautiful, well cared for home, the charities she supports, and the perfect facade she presents to the world.  For all her efforts, she never feels she is good enough or that she measures up to the lofty standard she has set for herself.

Trish is shocked by a visit from her sister-in-law who is dying from cancer and her first thought is for what the neighbors might think to see such a ravaged and disreputable looking person on her doorstep and her battered car parked in her drive.  The visit doesn’t begin well; she has never felt a warm friendship for her sister-in-law or for her alcoholic brother-in-law, but the sister-in-law gives her a gift that begins to change Trish for the better.  However, twenty years of hiding a secret from her husband and daughter is not something that can be changed on a whim.

As Trish struggles to become a better person and work her way toward a point where she can share her past with those she loves, a year passes, her daughter moves out and severs relations with her, and her husband gives up on the marriage as well. Devastated, and thrust into a position where she must learn more of her past in order to save her present, she moves beyond the basic story of being abandoned by her unmarried mother at the scene of her mother’s suicide.  She was raised by an aunt and uncle who led her to believe she was their child until a classmate taunted her with the truth.  Her feelings for her adopted family changed and she’s never quite forgiven them for their lie.

Her sister-in-law’s gift puts her on a road to change, but all the changes she makes in herself in the following year are not enough.  She has failed to communicate her change of heart to her family.  To move forward requires tremendous faith and courage which she is not sure she is up to, but she must try.  A raging winter blizzard adds another level of stress to Trish and her family as they each battle both the winter storm and secret storms raging in their hearts.

Trish is the most finely developed character in the book and much of the story is based on her growth.  She is a character readers can identify with, at least in part.  I would have liked to see her husband’s character developed a little better.  It was a little hard to feel much sympathy for a man who was seldom home and who basically sneaked out when he left her.  I particularly liked the eight-year-old niece of Trish’s husband, a child with a stubborn streak who found her own way to survive and who plays her own important role in the story.  The plot is absorbing, but sometimes a little confusing with so many generations and relationships pertinent to Trish’s problems.   There is enough action to make a reader want to read the book from start to finish in one sitting.  There was a disappointing number of typos and copy errors, more than is usually seen in books coming from this publisher.

Overall, reading My Gift To You, was a satisfying experience.  I’m not sure if it was because I’ve read several violent and disturbing books recently and needed a soothing break or simply that I found a calm, peaceful message of hope, faith, and gratitude in the book that felt right for beginning the holiday season.  I can see this book becoming a popular gift for the holidays.

My Gift to You is Lori Nawyn’s first novel, though she has had numerous short stories and articles published.  She is perhaps better known as an illustrator than a writer.  She and her husband live in Northern Utah.

MY GIFT TO YOU by Lori Nawyn, published by Covenant Communications, softcover, 183 pages, $9.99

Jennie Hansen is the noted author of many LDS fiction books.