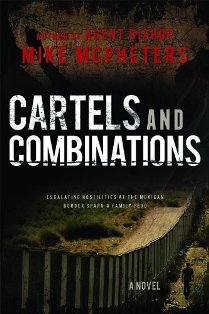 Cartels and Combinations by Mike McPheters puts forth an interesting theory concerning the drug cartels and even the terrorist groups causing havoc in today’s modern world.  Readers familiar with the Book of Mormon will certainly see the parallels the author points out to the secret combinations of Gadianton and Kishkumen.

McPheters tells a story of two brothers, sons of migrant farm workers who make different choices in life.  One, Ruben, returns to Mexico and works his way up to leading a major drug cartel known as the Brotherhood while the other, Enrique, goes to school, becomes an attorney, joins the Church, and becomes the U.S. government’s chief prosecuting attorney for major drug cases.  Over the years they have minimal contact, but retain a strong sense of family.  Eventually Ruben’s son takes over the business and finds himself in constant conflict with El Gordo, son of one of his father’s old enemies.  El Gordo kidnaps Elena, daughter of the prosecuting attorney in an effort to force the release of El Gordo’s sons who were caught smuggling drugs across the border into the United States.  The young woman is drugged and transported to Mexico where both the US and Mexican police struggle to obtain her release. The Brotherhood gets involved and the outcome is violent.

I found the premise behind this book interesting and was intrigued to read a novel that is blatantly far to the political right.  There are no concessions to political correctness.  That alone will appeal to many readers. Though it is highly critical of the current immigration mess occurring along the US’s southern border, it is not racist or derogatory toward Hispanic or Latino people.  It does find strong fault with the liberal left.

Beyond the philosophy behind the basic story, the novel has a large number of faults.  To begin with there is a continual parade of backfill throughout the entire book.  No scene or action is straight forward, but is always riddled with some kind of past memory, which stops the action cold.  There is a great deal of preaching and I found the two old men who devised their own Sunday School class curriculum out of line.  Their preaching does nothing to further the story, is repetitive of points already made, and runs contrary to the Church’s teaching guidelines.  Few characters are more than cardboard cutouts whom the reader barely knows.  There are problems with times and ages as well.  El Gordo is described as in his early thirties, yet he supposedly has two adult sons.  The reader knows they’re adults because they’re being held in jail and not in a juvenile facility.

McPheters presents several facets of the present immigration situation, showing the injustices many Latinos face even when they are legal citizens or residents of the US.  He also shows the barbaric tactics used by drug lords against their own people and the contempt that is fostered by them against gringos.  He makes a strong case for Americans waking up to the fact that by purchasing and using drugs they are as responsible as the Mexican drug lords for the murder, poverty, and abuse that has become rampant in both the United States and Mexico because of the drugs.

I found the book an interesting read, thought provoking at times, and I don’t regret the time spent reading it, however the message is not presented as well as it could be and the book is in sore need of polishing.  The author would benefit from studying fiction components.  In spite of the book’s technical problems, it will, like the author’s first book, Agent Bishop, be a compelling read for many people.

McPheters is a former FBI Special Agent who has been involved in solving several high profile cases.  He and his wife have five children and reside in Washington state.