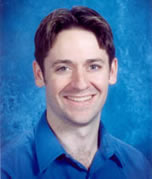 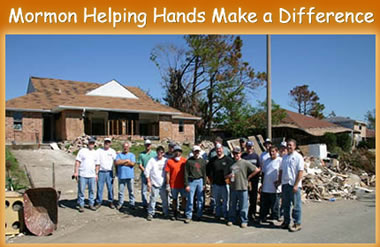 By Jared Johnson, with photos by Steve Moffitt, Jason Shepard, and Ed Wilson

The lives of New Orleans residents are continuing forward, long after the national media spotlight has chosen to shine elsewhere.  Most of the news anchors have finally left town to cover more “pressing” stories in other parts of the country, but thousands of Gulf Coast families don’t have that option.  The only issue right now is how to rebuild their lives, just seven weeks after Hurricane Katrina ravaged the area. 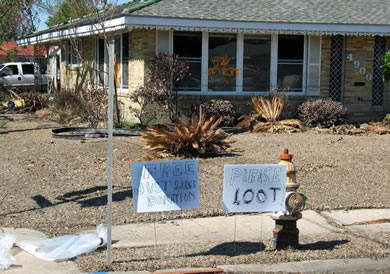 With nothing left of any value, these homeowners erected signs telling looters to take whatever they wanted.

What you no longer see on the news ticker is what happens when the water subsides and residents are left to sort through mountains of debris.  It’s difficult to comprehend their plight without witnessing it firsthand, but many Latter-day Saints are learning the real stories of hope, love and life following the worst natural disaster in American history. 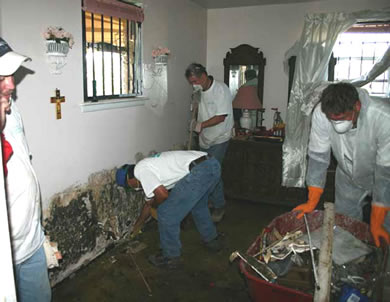 The mold and mildew that grew up to the water line forced workers to wear masks.

The response to the hurricane, as many already know, has included the masterfully coordinated aid of the Mormon Helping Hands.  Each weekend for the past six weeks, thousands of Melchizedek priesthood holders from neighboring states have carpooled to hard-hit areas in Louisiana and Mississippi.  We leave mid-day on a Friday, pitch tents around church buildings, work until Sunday afternoon and return home mere hours before we’re back to our regular jobs on Monday morning. 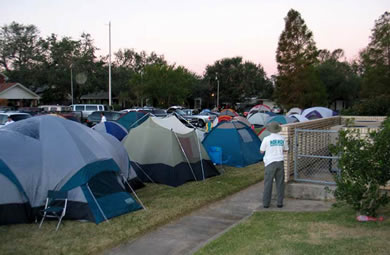 Dawn breaks over this tent city, which was was home to Mormon Helping Hands volunteers.

Every man who has been part of this significant cleanup effort will agree that the amount of work done in that short 36-hour timeframe is practically inconceivable.  It isn’t glamorous, nor could it be documented in a reality television special, a la “Extreme Makeover: Home Edition.”  There are no cheering crowds lining the block, no special “reveals” to pique our curiosity.  There is only Christlike service, which by definition does not draw attention to itself.

Last weekend, nearly three hundred men caravanned from their homes in the McKinney Texas Stake north of Dallas to help make homes habitable in the New Orleans area.  Each of us who were part of that workforce could see for ourselves that the portrait of the area has been painted with too negative of a brush.  The first thing we noticed after meeting local residents was their lack of guile.  They didn’t waste their breath complaining about the mayor, the governor or the president.  They had no desire to involve themselves in the dizzying game of political finger-pointing that has emerged.  These humble people wanted merely to thank us for easing their burdens, if only for a short time. 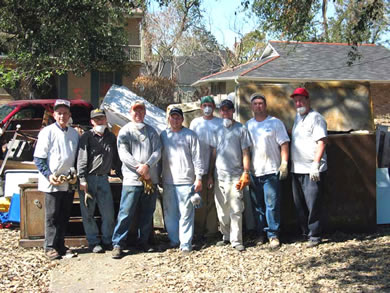 Team 3 of the Allen Third Ward takes a breather, some of them still wearing their protective masks.

An Eerie Reminder of What Happened

The Church’s response in Louisiana and Mississippi utilizes a work order system.  People of all faiths request help using a Web site, and local members work feverishly to link them up with teams and equipment that can get the job done.  My team from the Allen Third Ward responded to three work orders last Saturday and Sunday.  Each one had a moral and a story.  Take Jeanne Fourroux, for starters.  Our first order took us to her home in Metairie, which took on two feet of water when Katrina compromised nearby water sources.  She needed help tearing out every square inch of drywall and insulation below that level.

As our eight-man team began the arduous task, it almost felt too normal.  There was little outward evidence of water damage.  You could almost pretend that we were simply remodeling, if not for an eerie reminder that lay on the living room floor among her son’s scattered baseball cards.  A notice from the Jefferson Parish Sheriff’s Department that used to hang squarely in the window read:

Residence cleared . No bodies inside.

Jeanne’s son paid no mind, preferring to chat about the league championship series.  It was obvious that the disaster victims [or victors, rather] have every intention of continuing life as regularly as possible.  After five hours of work, a pile of debris stretched along 100 feet of the curb.  The interior resembled little more than a frame by the time we were done, but it was a necessary step toward rebuilding.  Jeanne’s every expression indicated her gratitude, and we parted with best wishes for the future. 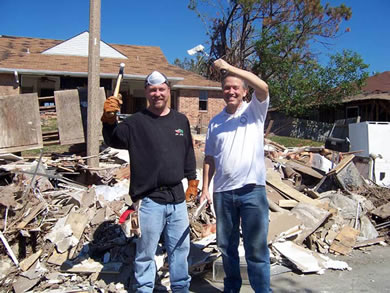 Jason and Greg Shepard wield their tools at the end of a long shift.

You Can Still Smile

Our second work order took us to the home of Donna Anderson, where a crooked front gutter bore two undeniable marks of wind damage.  Another unquestionable indicator of Katrina’s strength stood perpendicular to the front lawn: a gargantuan tree stump slanted toward the house.  The sod within a ten-foot radius stood vertically after being pulled up by the tree’s root system.  It almost looked surreal, but by then we were used to seeing objects in unnatural conditions – boats along the free,way, buses overturned in parking lots, and fences whipped horizontally, for instance. 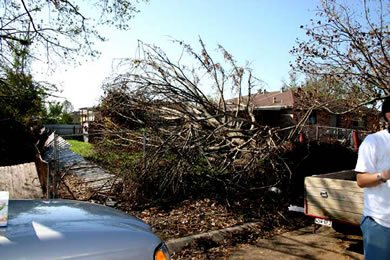 A big project for Mormon Helping Hands is the removal of downed trees. This one was relatively easy because it didn’t fall across any power lines.

Two looming 40-year-old pines used to stand sentinel in Donna’s front yard.  The first one landed on her roof and car when Tropical Storm Cindy brushed through the area in early July.  She and her husband repaired the roof just two weeks before Katrina hit, but the category-four storm knocked over the second tree in a nearly identical spot.  It seemed justifiable for her to question why such extensive damage happened – not once, but twice.  Instead, she taught us that you can still smile during life’s ironies.  She was simply thrilled to see that former strangers could spend several hours on a Saturday afternoon making her yard more livable. 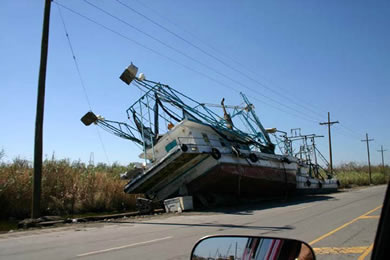 Numerous boats were carried inland by the force of the hurricane.  This one is caught up in power lines.

Passing the Sacrament in Blue Jeans

Our stake held an unusual sacrament meeting early on Sunday morning.  It had none of the trimmings of a traditional church service, which only made it easier to identify the unique spirit.  We gathered in the chapel and opened with the strains of “Because I Have Been Given Much.”  The first line of that poignantly appropriate hymn choked up men who understood that they were heeding those very lyrics: “I too must give.”  It wasn’t the last time on the trip where a hymn would convey the spirit of the Lord.

The sacrament was blessed and passed by men wearing T-shirts and blue jeans.  The sight drew no hint of irreverence; the spirit was as tangible as though the Lord Himself were in our presence.

We needed no further reminder that we were gathered together as a powerful priesthood union.  After an abbreviated program, we dispersed to head back to work.

It was worth the 1,000-mile roundtrip to witness what happened at the end of our final work order on Sunday.  Our team’s final task before heading back home was to remove every item from inside the Tatrons’ house in St. Bernard Parish.  This, of course, is the area of New Orleans with some of the most sustained water damage.  Water lines on the front of the brick homes top off eight feet above the ground.  Damage could be described as “total.”

Emily and Brett Tatron have a young family who moved into their house just three weeks before the storm.  They had spent months remodeling it to fit their son, Jacob, and infant daughter, Sophia.  Jacob turned two years old on Saturday, August 27, and his parents had planned a fun birthday party.  Instead, they were forced to evacuate the city because the storm turned eastward.  They safely escaped before Katrina made landfall on Monday, but many whom they knew weren’t as fortunate.

Emily, her mother and her father-in-law oversaw us as we removed everything from inside the house.  At times, they looked longingly at a wall hanging or china cabinet and remembered something sentimental.  It’s funny how simple household items represent so much of our lives.

When we had removed every piece of crumbling wooden furniture, every child’s toy and every closet full of clothes, we asked if we could sing a hymn in closing.  Eight priesthood holders then joined in chorus, “God Be With You ‘Til We Meet Again.”  A grateful mother, grandmother and grandfather tearfully smiled in return and thanked us once again.

That moment represents the reason we made the trip.  We were reminded at that time that a loving Father in Heaven is involved in our lives and knows how to succor the weak.  He issued a call to serve, and thousands have responded already.

There is much good happening in this part of the country.  As Latter-day Saints continue to help hurricane victims in uncountable ways, we would do good to look past the politicking and instead remember the individuals who are rebuilding from the ground up.  We have so much to learn from them.