If a Drop in the Bucket could become a Flood

Mariah Proctor is a junior at BYU.  With other BYU students, she spent the summer in Thailand volunteering to help children.

Whenever you spend an extended amount of time in a place, there are things that stick with you. In the midst of the initial cultural shock, you never think any of these foreign customs or ideas will find a permanent or even semi-permanent place inside of you, but somehow they do. I’ve been back in America over two months and I still lower my head (traditionally the most sacred part of the body, so you don’t want yours to be higher than people above you) when I walk in front of people like a regular Thai.  Somewhere between that initial joyful surprise at how much you don’t know and getting home to people who have no idea what you know now, some of it sticks and you are changed.

Development work is trying and sometimes all you end up getting out of it is a dull sensation of disillusionment from the discovery that this world that you so desperately want to improve seems as though it just doesn’t want to be changed. In the midst of this hopelessness, however, you meet a few good people who are lifting where they stand and truly making a difference, even its smallest measure.

My time at the Children’s Shelter Foundation  (though it was very brief) was both something that stuck with me and one of those brushes with good people. I was unable to accomplish what I’d hoped to this summer, but I feel as though the least I can do to pay it forward for the experience I had and the cultural context I have that my peers do not, is to shine the light on a few of the successes I encountered in the midst of so much disappointment.

The children who live at the farm  are mostly neglected or orphaned children from the hill tribes (ethnically non-Thai peoples living in the mountains around the northern part of Thailand) who have found refuge in this place. Many of them are deaf and, though hereditary deafness is a natural consequence of these communities remaining isolated for so long, their disability is considered to be a “curse of karma” and they are never treated as equal human beings.

But these children can communicate and visitors, upon arrival might even receive a sign name from them if they’re lucky. They called me what in sign means “tree” (no doubt thanks to my towering figure), and they’re anxious to include anyone with any inclination to be included, treatment they were never really offered in their short lives to this point. One of the biggest joys of being in a place full of deaf kids is that they can’t hear themselves. Laughter is long and loud and true without any pesky inhibitions or self-imposed checks on volume and intensity. You hear that booming laughter and you can’t help, but laugh yourself, even if you didn’t see the joke. 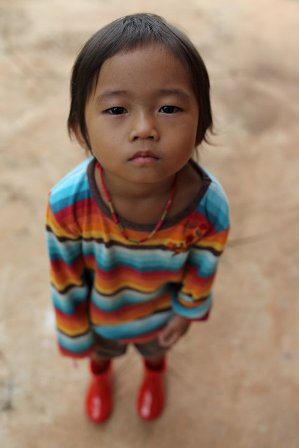 Despite living a life where the things we normally think of as bringing joy and security were largely absent for such a long time, they don’t let it stop them from the sweet pleasures that life affords them now. During my time there, they had a German volunteer who was teaching everybody juggling and circus tricks, and the kids were always impatient for display in their newfound skills. The volunteers that come to the Children’s Shelter Foundation aren’t crammed into a set of preconceived notions about what the place needs, rather they allow people to bring what unique skills they have into the lives of the people that live there. And it truly blesses all involved.

My original wish in going to Thailand was to find a way to recognize people that, in whatever ways and means within their power, bring light to dark spots in the world and in the lives of the people around them. Maybe this is just my drop in the bucket to spotlight their drop in the bucket, but it’s a start. When good people continue to add their few but significant drops to that bucket of compassion and recognition and desire for progress, and refuse to be deterred by closed doors and tied hands, that bucket will one day overflow and change the whole world.