Traci Hunter Abramson has risen in the past few years to become one of the most highly recognized LDS suspense writers in the field.  This former CIA worker knows how to write intrigue and understands the workings of multiple intelligence departments.  She brings to her writing fresh venues and a realistic knowledge of government agencies, particularly those dealing with law enforcement, terrorism, the military, and international relations.  Her newest book, Backlash, brings the world of terrorism close to home. 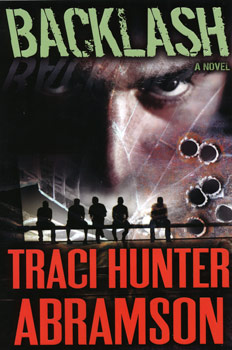 Abramson’s previous suspense novels, featuring the Saints Squad, have been, first of all, intense suspense stories with just a touch of low key personal relationships.  Backlash, though suspenseful, takes a slightly different look at the personal lives of highly trained intelligence operatives, in this case, Navy Seals.

Kel Bennett, the leader of the Saints Squad, is severely injured during the extraction of two agents from a terrorist stronghold.  For the first time in his five year marriage, he and his wife, Marilyn are in day to day contact over an extended period of time.  They discover they really don’t know each other well and they haven’t recovered as much as they thought from traumatic events that occurred when they were much younger.  They are both hurt and confused by what they perceive as keeping secrets from each other.

As Kel struggles to recover from a gunshot wound in his leg, he discovers his wife isn’t as anxious for his complete recovery as he is.  She’d like nothing better than for him to have to leave the Seals.  She is forced to see the real gritty nature of his work and wonders if she can live with a man who can take the life of another human being.  He is shocked to discover the wife he thought spent her spare time doing medical transcriptions is writing a novel based on her own hurt and loneliness.  I was impressed by the way Abramson dealt with the issue of soldiers and law officers who have taken life in their field of work.

While Kel and Marilyn struggle with their marriage, the terrorists aren’t willing to go away and just forget their plans to attack America.  The terrorist leader, Akil, sends his right hand man, Halim Karel to America to retrieve the woman, Lina, he believes is his niece and kill the men he holds responsible for her capture.

Halim pieces together the few things he knows about the squad’s leader from a newspaper clipping and makes plans to follow him when he leaves Bethesda Naval Hospital, assuming the man he considers his chief enemy and the one most responsible for the capture of the young woman he seeks will be found close to Kel.

Kel is struggling with questions that pit saving his career against saving his marriage, when staggering events throw Marilyn into the center of Kel’s world.  Though Kel is supposedly off the squad while he heals, his second in command is temporarily in charge, and a new man has been brought in to fill the empty spot, he finds himself pulled back into the unit when he, his wife, and one of his men become targets of Halim.

There are several scenes in Backlash that will have the reader sitting on the edge of his/her seat, biting fingernails, or doing whatever releases tension for him or her.  Yet there is more introspection and character development in this story than is usual in this author’s fast paced novels. It is a more character driven book than is usual for

Abramson.  That isn’t to say the fast action her fans love is missing; it’s still there, it just doesn’t overpower the characters this time.  From a personal point of view, I find Backlash an exceptional novel.  The psychological and relationship story line is believable and compelling, but the action is not neglected.  I found myself completely pulled in by both plot lines.
Abramson grew up in Arizona, graduated from BYU, and worked for the CIA for six years before settling down to raise a family.  She and her husband are parents of four children and she is the coach of a high school swim team.