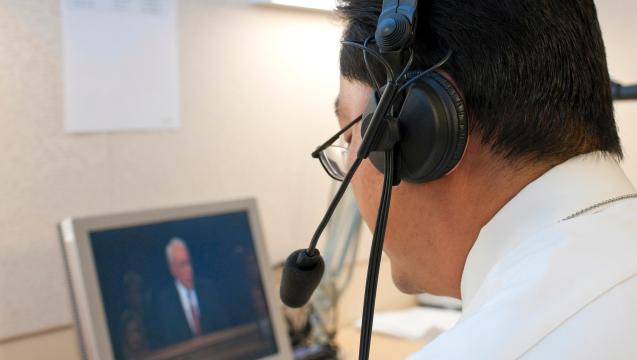 When asked how he feels about his colleagues, Brad Lindsay says a lot with just three words. “I love them,” he states, drawing a wide grin. Lindsay is manager of interpretation services for The Church of Jesus Christ of Latter-day Saints, where he works to ensure the Church’s twice-yearly general conference is translated into 92 different languages for broadcast around the world.

The Church’s culturally and linguistically diverse membership allows it to recruit literally hundreds of interpreters to accomplish the colossal task. The interpretation of general conference is immense. Global broadcasts reach millions of listeners, making it one of the largest interpretation efforts in the world.

While most interpreters work in the Conference Center in Salt Lake City, others are situated in a dozen other translation offices around the world. Not all are professionals. They are often students or immigrants translating from English into their native tongues. Even Church members who have served in international missions participate.

Lindsay and his colleagues draw on their professional networks to find those with the right skills, background and other attributes it takes to be an interpreter. They’ll often use word-of-mouth and occasionally tap existing team members to suggest potential recruits.
Naturally, language mastery and ability to enunciate clearly are a must when interpreting general conference. Interpreters must also keep two conversations — in two different languages — going on in their head at the same time. “With interpretation, there is no one thing that we look for,” Lindsay said. “It is a combination of things that makes for a good interpreter.”

See the rest of this article at the LDS Newsroom.