Dipping into the Soul of God | Meridian Magazine

Dipping into the Soul of God

The decision to ditch practicality and take up the theatre as a lifelong pursuit is a significant one. Doing this thing for real means a lifetime of being not only poor, but also criticized for your decisions, sneered at from behind and pitied for your inevitable rejection. Such dazzling guarantees make the initial decision that much more weighty and people who take the plunge have to be pretty fired by passion—there’s a good possibility that that fire is all that will keep them warm for years to come. Often what tips the scales on that decision are a few incredible, personal, transformative moments in a theatrical setting. Not just moments of being purely entertained or generally impressed with a performance, but moments that make you feel the most alive and the most yourself you’ve ever been and you know that’s not the time to turn around and leave it behind.

One of those moments came for me in the spring of 2007, just as my junior year of high school was ending and a summer in the British Isles was beginning. We went to Arena Stage in Washington D.C. to see their Bunraku (Japanese puppetry) adaptation of the story of Peter Pan, called Peter and Wendy. Already one of my favorite stories, this version of Peter Pan, infused with Celtic music and blazing with creativity, struck a previously untouched chord with me. I sat there, 17 years old and about to embark on an incredible summer abroad, and in the moment when Peter came back for Wendy only to find that she’s all grown up and she can’t fly anymore, I burst into tears.

I knew because Shel Silverstein told me in the poem “Summer’s Coming,” that this long anticipated summer would just fly by, and then I’d be a senior in high school, and then I wouldn’t be in high school at all, and then the rest of my life would happen. It was as if I was perilously perched and gently beginning to pitch atop a great slide, and the second I eased my way forward there would be no controlling the barreling on into the future that would result. And I was right, “the tree sighs for it’s growing.” That summer was gone in a flash and took the rest of high school with it and I went off to college and never came back.

I am ecstatic for the life that’s ahead of me, and when I look back at that teary-eyed girl giving her hearty standing ovation for a moving performance, I don’t envy her, her position in my life’s timeline (except her proximity to the family members I left in the east). I know things now that I hadn’t even supposed then, and I’m growing in confidence and in capability every day and would never trade the progress for a chance to relive the glory days. 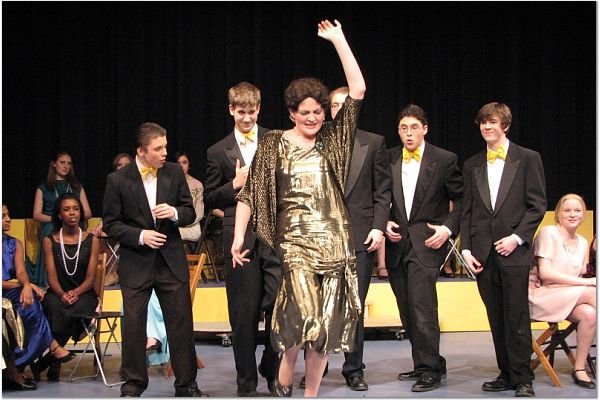 Theatre has provided the punctuation marks that help me make sense of the stream of consciousness of my life. The facts that a stranger can stand before me, bathed in artificial light and bring me the truth about myself is a miracle to me. The fact that I can be that stranger to someone else astounds beyond words. I just got home from seeing a performance of the Cashore Marionettes which is what brought me back to that performance of Peter and Wendy. Joseph Cashore is a self-taught puppet maker and mover and, in short, simple vignettes, he provided an elevated vantage point from which I could view the world and my place in it more clearly.

He had a piece called “final farewell” which a marionette of an old woman with a cane bringing a potted flower to her loved one’s grave. Though the body of the little form was nothing, but foam and wood and paint, I was right there with her weeping at the graveside and trying to remember how to get on with life. It was disorienting when he would drop the strings and the marionette would go lifeless again because you came so entranced by the story, you began to think the person living it couldn’t be anything, but real.

Two minutes of watching the old woman marionette at the graveside on the stage, and I already feel as though I understand that much more about grief than I used to. I’ve never lost anyone whose soul I’ve shared, but theatre gives me a chance to understand a set of circumstances without living through them personally. Whether as a performer or viewer, in scenes tragic or comic, this thing I’ve chosen, and everything that goes with it, is an opportunity to dip into the soul of God and, even in its tiniest measure, be able to see people in their full complexity and imperfection and find a way to understand what they are feeling. He lends us His eyes and we see people, for a moment, as He sees them. Through the eyes of love.