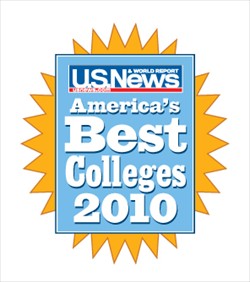 BYU also ranks No. 4 for least debt and is most popular university in America.

Brigham Young University is ranked 75th in the 2011 edition of U.S. News & World Report’s “America’s Best Colleges,” with the Marriott School of Management’s undergraduate program ranked among the top 50 “Best Business Programs,” coming in at 34th.

The September 2010 issue of U.S.News & World Report, which hits newsstands Tuesday, Aug. 31, ranks more than 1,400 four-year accredited colleges and universities by mission and region. BYU falls into the category of “national universities,” which includes schools that offer a full range of undergraduate majors, plus master’s and doctoral degrees.

BYU has also been named the most popular university in America by U.S. News & World Report.

BYU topped Harvard, Stanford and Yale to claim this year’s top spot, after coming in at No. 2 last year to Harvard. BYU tied with Harvard for the top spot two years ago.

The rankings are based on a measurement called yield, which is the percentage of accepted students who go on to enroll. BYU topped the rest of the schools with a 78 percent yield, followed by Harvard at 76 percent and Stanford at 71 percent.

This year the university is also listed as 20th in the “Great Schools, Great Prices” category” – schools that are recognized for high academics but cost considerably less than many other schools. Additionally, it is listed as 4th in the category of “Least Debt,” which compares the average debt carried by departing graduates.

The Ira A. Fulton College of Engineering and Technology was also listed among the top engineering schools, with its undergraduate program ranked 78th.

In specialty categories, the Marriott School ranked 3rd in accounting, 17th in international business and 21st in management.

The top five institutions in the “national universities” category were Harvard, Princeton, Yale, Columbia and Stanford.