Ode to that Thing that Never Forgets | Meridian Magazine

Ode to that Thing that Never Forgets

I spent the first ten years of my life barefoot—about as long as I could live that way and still maintain some semblance of dignity. Since I was forced to become a shoe-wearer, I continue to grab every chance I can to lose the shoes. Since it’s polite to remove your shoes when entering a Thai home, this place is a little piece of heaven, if for that reason only. Being the unshod specimen that I often am, the nerve endings I bare underfoot have feasted on more sensory buffets than I care to share. But feeling the bristled back and hulking warmth of an elephant’s shoulder blades as they rose and fell under my feet, all while being carried deeper and deeper into the hills of northern Thailand was truly the most exotic and unique of my feet’s young life.

As far as my excited feet go, I’ve found that though they expect you to take off your shoes when you come indoors, they don’t take kindly to people just walking around barefoot outside, so tragedy of my youth, I have to wear shoes here after all. But the elephants didn’t mind my bare feet and I have built a true appreciation and love for these jungle beasts (and not just because of their pedi-tolerance).

If you’ve ever seen an elephant, whether just a picture or in its real-life magnificent splendor, you’ve already seen a third of Thailand. They use the image of an elephant in all the décor, in religious shrines, on brand logos, and on every accessory or souvenir you’d ever wish to buy. It’s unusual, but lovely and I sometimes wonder why we don’t feature our beasts in a more prominent visual place in America. You don’t really see squirrels and deer plastered all over the billboards and on peoples’ shirts and in the candy stores. We don’t really have an equivalent of a Thai elephant in America, and don’t even say bald eagle, because you don’t see live bald eagles in the markets and walking along the roads in America. Ever.

When my parents came breezing through (making people’s days as they went) on their way back from the Philippines temple dedication, we were able to go to an elephant show in the mountains north of the city. As we walked in, we walked past the gift shop and there were rows and rows of simple, but beautiful paintings. Little did we know that these paintings were compliments of a few dozen resident artists that weigh 6 tons and use their noses as their primary tool of artistry. As the finale of the elephant show, we got to see the artists at work, and it was truly a thing of beauty to watch the concentration on their faces as they produced paintings that were not just splatters or stripes, but detailed pictures of flowers and trees and even a few self-portraits. They looked like old women in an art class with their wrinkled, but knowing eyes and their furrowed brows. 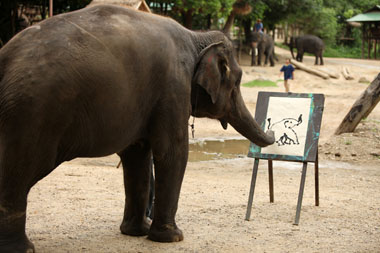 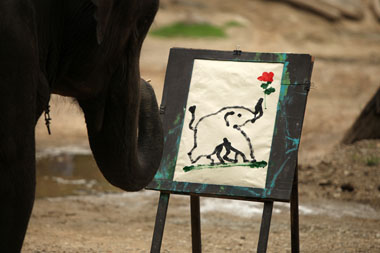 After riding elephants, you have the option of trekking into the hills to sleep among the hill tribes. Our internship group jumped at the opportunity and after hiking uphill for miles and miles took bamboo rafts back down the mountain. We rounded a corner, and there was a group of elephants trekking through the hills like we had been and waiting to cross the river that we were rafting down. I saw a baby elephant boldly leading the pack across the river, but it was deeper than the little guy expected, and it started sputtering and squealing as it reached the middle, and then my raft rounded the corner, and we saw no more.

Come to find out, the baby scrambled up onto one of our numbers’ rafts for air, and its mother, feeling protective and threatened, went wide-eyed and charged the raft. My mates had to scramble off in a mad rush, the action leaving one boy with a big ole scrape across his chest. I hope it scars so he has to tell people he got it while running away from a girl. It’s funny that when the rest of us heard that story, we had no pity, but we were each secretly jealous that the baby didn’t pick our raft.

With animals, particularly those with tender eyes and keen intelligence who have become token relics of the extremely exotic, there is a certain amount of tolerance.

We hear that story of elephant violence and we chalk it up to a mother’s protectiveness. We don’t call it a vice, we excuse the overreaction to the blindness that comes from animal instinct. But when a person overreacts or lashes out, we don’t have pity for their situation or understand the insecurity that comes with loving someone.  We become defensive and hit them back. It made me wish that I took more time to look at the whole view of situations where I am on the defense in my life. Maybe when I thought I was being attacked, that other person just felt protective and vulnerable and didn’t know how else to react. There you go elephants, being fascinating AND teaching me about life.

The other day I was asked my favorite animal and three adjectives to describe why I like it, and (this is a new development since I’ve been here) I quickly said “elephants because they are intelligent, sensitive and…um fuzzy?” It was then that I was informed that my answer to the question supposedly defines what I’m looking for in a spouse. (haha fuzzy…). Aristotle said the elephants are “the beast[s] that passeth all others in wit and mind,” yea that’s what I want in a husband. As long as he doesn’t know it.