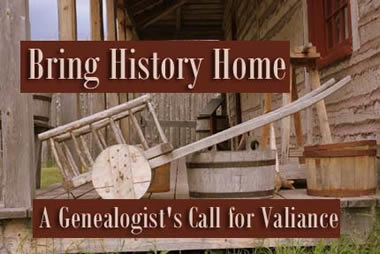 An understanding of history and the events of our past is crucial to building a firm foundation for a bedrock testimony. Knowing our genealogy and understanding the role of our ancestors in history will “bring history home,” and make it real and applicable to our lives so we can stand and be valiant in a day and age when the winds of untruth are blowing all around us.

The recent presentation of the PBS production, The Mormons , written and directed by Helen Whitney – a documentary producer of considerable esteem – generated great excitement in the LDS community. It was highly promoted for months, and stirred up anticipation among people as a new evaluation by the world regarding who the Mormons were, how they began, what they believe, how and why they are regarded by other communities, and where they are headed in modern society. It was kind of a twist on the popular LDS chestnut “Where did we come from? Why are we here? And Where are we going?” that missionaries ask the people of the world.

The two days of programming were received with praise by some, uncertainty by many, and with disappointment by others. The producers addressed the history, the sociology, the organization, the culture, and the doctrines and practices of the Church of Jesus Christ of Latter-day Saints, not in totality nor as we of the Church see ourselves, but how some people who are not members of the Church see us.

The picture that came out of this program was that of a Church with unclear origins in the 19 th century by illiterate, inept, and empiric leadership, bizarre rites and practices, and iconoclastic doctrinal and social beliefs? but one that has become a dominant religious power of the world in the 21 st century.

As a professional genealogist in the LDS community, I regard myself as a “social historian.” I know the importance of the knowledge of my family history, my clients’ family history, world history, the history of the Church, and the world we live in. I examine history not only to identify lineages, but also to gather details of the lives of those I study? because that knowledge leads to further clues about the “people of history,” as I call ancestors. Ancestry is intrinsically connected with history and its records. That is the lens through which I viewed The Mormons .

Because of my knowledge of the history of the Church of Jesus Christ of Latter-day Saints, The Mormons stirred up a multitude of emotions and questions in me, from “How could they say that!” to “Father, forgive them.”, to “Father, forgive me.” It was a thought-provoking, yet disturbing experience, because we are a peculiar people with a history that is unique to us.

And to understand and know the truth about us requires knowledge that cuts across the temporal to the spiritual. This documentary did not accomplish this because the temporal was examined without the spiritual and through the eyes of those who were without testimony. Their often confusing and unsettling messages implied that members of the Church don’t own up to their own history, that they don’t understand what happened, or why it happened; because if they did, they would “recognize” the Church as false.

The truth was lost.

In the end, after pondering and considering the messages of The Mormons , two important connected concepts stand out in my mind that I wish to share with the readers of Meridian Magazine that will enable them to move from the temporal to the spiritual. First, we need to “bring history home,” and second, we need very much to be valiant in our testimony of Jesus.

“Bring history home” is a phrase I use to encourage people to infuse their family history with the history taught in society. History is often called the “study of the past” – and for most people, because it is past, it is forgotten. I believe history gets forgotten when people do not link their own family history to the events of social history; they don’t “bring history home.” If we forget our history, and allow others to dictate the story of our past to us, we lose the testimony of our fathers, and of our prophets.

Linking the lives of our ancestors to the events of recorded history helps us understand what has happened in the past and why it happened, and the part our families played in that history. And then history has meaning in our lives, and can encourage how we live. I believe, as we learn Church history and our own family history and how this all intersects with societal history, we become armed with truth and we can be valiant in our testimony of Jesus Christ.

These messages prompted me to “bring history home” and to think back to my own family and their experiences with Church doctrine, practices, and history. Family history records that my great-great-great grandfather Robert Cowan Petty joined the Church in about 1840 in Benton County, Tennessee.

In 1836, he had been the arresting officer of Apostle David Patten, and his companion Warren Parrish, and that experience may have led to Robert’s conversion to the Church of Jesus Christ of Latter-day Saints.

She was without support in the terrible conditions of that camp, when Robert Petty married and took her into his home, with the support of his first wife, Margaret Jefferson Wells Petty, and their seven children. The combined families crossed the plains together, during which time a five-year-old son, John, was killed during a stampede. They moved to a distant corner of the Salt Lake Valley called Herriman to finally settle in peace.

Robert had two more children by his first wife, and three by Mary. Then in 1855, he was called to serve a mission for the Church in the Indian Territory, which is now Oklahoma, near the Arkansas and Kansas borders. He willingly and joyfully went to serve the Lord in whatever way he could; but in January, 1856, he developed pneumonia, and two months later died on the cold plains of the Spavinaw Valley. His family learned of his death six months later.

Faith in the Gospel

By “bringing history home” I learned my ancestor had great faith in the gospel, and in a living prophet, and gave his love, and his life to all aspects of his faith. To me there was nothing about his life, or his two plural marriage families, that I should feel embarrassed about. He had a testimony of Joseph Smith as a Prophet of God, and knew Brigham Young, and bore testimony of him as a Prophet of God. How can I ever do less!

The PBS production portrayed that within the Church of Jesus Christ of Latter-day Saints there is no room for scholarly study; that only the word of Church leaders counted, and that students who questioned and studied the history and doctrines of the Church were condemned and dismissed. Nothing could be further from the truth.

I consider myself to be a scholar, and I delight in learning the history of our people, as well as of the people of the world; but I have learned that to understand and appreciate the events of history, and especially religious history, there is a spiritual component that must to be considered, and we cannot evaluate the actions of people in that day based on the social or moral opinions of our own society.

The LDS Church, from my experience, encourages thought-provoking study in all areas of knowledge. The students and instructors at the various Church colleges and universities excel in many fields of endeavor, with great strides by LDS scholars in religious studies being recognized now by other religions around the world.

This brings us to the issue of being valiant in the testimony of Jesus, and why “bring history home” is so important to that cause. There is no aspect of Church history or any study relating to Church doctrine that can be troublesome to members of the Church, if they put aside the opinions of the world, and hold strong to a testimony of Jesus Christ and his living prophets.

If Joseph Smith was a Prophet of God, and Brigham Young, Spencer W. Kimball, Gordon B. Hinckley, and all others who represent that calling are indeed prophets of God, and we believe it – then we can read our history, relate it to our experience, and that of our ancestors, and understand it. We can then teach our families, and testify of the miracles of the Lord through his servants.

The core message presented by The Mormons was that this was a religion made up by Joseph Smith, a man with a much maligned character. They described him as one who introduced polygamy to America, to satisfy his lusts, and portrayed him as hungry for authority, seeking to place himself on thrones of power, even running for President of the United States.

Heavenly Father wasn’t in this story; and because God wasn’t in the story, it could only be about a man, and a peculiar people. Being an “unbiased” documentary, they couldn’t put the possibility of Jesus Christ behind the actions or words of Joseph Smith.

When the program quoted Joseph Smith as telling his followers in 1835 “this Church would someday fill the whole Earth,” the producers may not have realized that he was prophesying. But then they went on to show how the Church went from a secluded society in the West, to a political entity, to a missionary force, to a humanitarian service, to an international presence, to an economic and social leader in the world.

Each succeeding prophet of the Church was described in The Mormons as changing the direction of the Church as though he was succumbing to the pressures of society. They didn’t allow God to be in their story. But with each change the Church grew, and the gospel spread. God is in our story, and the prophesy comes true.

If we “bring history home” and learn about our history, our family history , our hearts will reach out to our fathers. They in turn will bear testimony to us of the truth of our prophets, and of their history.

We will always be peculiar in the eyes of the World; but we will then be able to learn the truth of all things, and of who we are in relation to Joseph Smith, and Brigham Young, and all of the prophets of the Restoration. We will be able to sing their praises, and love their works. We will be able to learn all of the doctrines of the Lord with faith and without fear of the world. Then we can be valiant in our testimony of them, and in so doing, we become valiant in our testimony of Jesus.