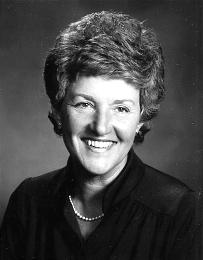 On February 12, 2003, Meridian honored Elaine as one of the recipients of our First Annual Meridian Leadership Awards. Today we re-run the brief tribute written then and honor Elaine as a dear friend.

“It is her leadership in the home that is most remarkable to me,” reports Holly C. Metcalf, daughter of Elaine Cannon. “Mother managed to be a full-time mom and still handle a full load of Church and employment responsibilities because she would get up at ‘the crack of dawn’ and write her daily newspaper column or the manuals for various auxiliaries, leaving her many hours to run the house, maintain the yard, sew, cook, and help her children with their needs. Her six children can speak of her ability to manage, juggle, prioritize, and inspire.”

Elaine Cannon may be best remembered for her service as General President of the Young Women, on the Church Correlation Committee, or as assistant editor for the New Era magazine, which she helped create.

The last decade or so has been marked by one heartache after another for Elaine and her family. She has lost three grown children to various diseases, and then lost her husband, for whom she had cared for 18 years while he struggled with the effects of a stroke. In spite of these potentially faith-wrenching and body-breaking trials, Elaine has provided an example to all her posterity of submissiveness to God’s will, steady endurance, and has shown the way to ‘carry on’ (which happens to be one of her favorite hymns). As an example of her optimism, when her own health problems become cumbersome she always replies when asked how she is, “Things are looking up, thank you.”

Holly reports further: “At age eighty she was just released from her calling as Stake Relief Society President to serve as a teacher in her ward Relief Society.”

Strangers and friends alike are impressed with her magnetism, warmth, energy and charm. Audiences and readers have been entertained and inspired by her words of instruction and testimony. “But it is to her family that she leaves the greatest legacy,” says Holly.