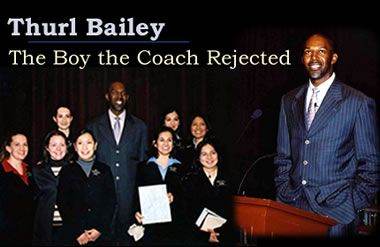 Millions of people followed Thurl Bailey’s career as a star in the NBA.  As #41 on the Utah Jazz basketball team, he was at the top of his profession.  Today, people still follow Thurl – but they do it for a different reason.  He is a man who knows where he’s going, and he owes it all to his membership in the Church. 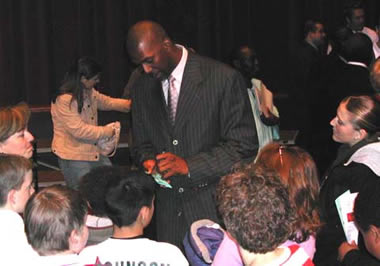 With his playing days behind him, Thurl is pursuing more careers simultaneously than most people pursue in a lifetime.  He is a basketball commentator for the Utah Jazz.  He is a motivational speaker.  He gives basketball camps, focusing his attentions on disadvantaged youth.  He is a singer with three CDs under his belt.  And in his free time, he has been known to appear in a movie or two.

But he lives his life according to three simple questions – questions that were asked of him by border guards who stopped him whenever he drove from Italy to Switzerland.  “Where have you been?” they asked him.  “Why are you here?”  And finally, “Where are you going?”

In 1995, those questions were answered for Thurl Bailey, when he joined The Church of Jesus Christ of Latter-day Saints.  Speaking at the Washington D.C. Temple Visitors’ Center this week as part of the Black History Month program, he told his audience that his journey toward those answers was guided by the people in his life – people who inspired him to become the person he is today.

The first person he mentioned was his father.  Even though Thurl was 6’5″ tall at the age of 13, he had never picked up a basketball in his life.  He may never have done so if he hadn’t had such great respect for his father that he wanted to be wherever his father was.

“I remember the day I decided I wanted to play,” he said.  “I didn’t have a real interest in the sport, but my dad was watching a game on television and I sat down with him.  I asked him questions about the game.  As we watched, I noticed one particular player.  The basketball looked like an orange in his hand.  Dad said, ‘Son, that’s Dr. J.’ I didn’t even know doctors could play.”

Intrigued by the game and the mysterious Dr. J – and wanting to spend more time with his father – Thurl watched as his father set up a makeshift basketball operation at his home.  The hoop was made from the lid of an old garbage can.  The basketball was a lopsided mess.  But none of that mattered, because father and son were spending that time together.

It didn’t take long for Thurl to develop a love for the game.  His father and his mother had both been players, and both taught him different aspects of the sport.  Hours were spent, as father taught son about ball rotation and the hook shot.  Dribbling was little harder, because “that ball would hit the tip of my size 15s.”

As he played, Thurl would pretend he was his hero – Dr. J.  “He was my idol,” he said, “not just for how he was on the basketball court, but off the court as well.”

A Waste of Time

After a summer of practice, Thurl tried out for his junior high school team.  He thought he would be a shoo-in, because the closest person to him in height was about five-foot-one.  But he didn’t make the team that year, or the year after.  Finally his coach said to him, “Give it up, son.  You don’t have it in you to be a basketball player.  Don’t come out for the team this year.  You’re wasting my time.” 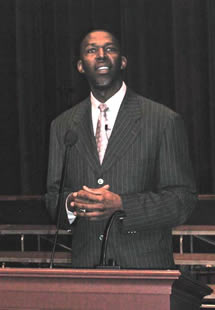 Thurl could have let that moment define him.  Many people let others shape their self-image, even if those others are misinformed.  But Thurl was made of different stuff.  “I still loved Dr. J,” he said, “so I’d still go home and pretend I was him.

“In the ninth grade, at 6’9″, I had a decision to make.  A new coach was heading up the team.  I’d gone through two years of disappointment.  Did I want to go through that again?”  Thurl couldn’t give up on basketball without one last try, however.  “What helped me make the decision,” he said, “was that if I didn’t go in, I’d never know.”

The new coach was different from the old one, and in being different he joined the list of people whose good examples helped put the Maryland teenager’s life on the road he eventually took.  The coach called Thurl over and said something he would never forget:  “‘You have a lot of work ahead, but I see potential in you.'”

Thurl’s potential must have been deeply hidden.  The new coach worked with Thurl for an hour each morning before school and an hour after school.  Even then, the only time Thurl played all that first year was to make the jumps that would give his team possession of the ball.

But by the end of his high school career, things had changed.  When he got a letter from a college offering him a basketball scholarship, he framed it and hung it on his wall.  Eventually he had 250 letters, allowing him to choose his school.  After college, he had a similar experience when he was chosen first among the college drafts, recruited by the Utah Jazz.

In his first game ever as a professional basketball player, Thurl found himself playing against other than his boyhood hero – Julius Erving, otherwise known as Dr. J.  Dr. J “tapped me on the shoulder.  He said, ‘Congratulations on a great college season, and welcome to the NBA.’

“Dr. J’s fingers were an inch and a quarter longer than mine,” Thurl recalled.  “I looked at his hand to see if there was an extra knuckle somewhere.  Shaking his hand was the greatest moment of my basketball career.”

But in Thurl’s case, basketball was also an opportunity to find the LDS Church.  Raised a Baptist, Thurl “loved going to church.  I couldn’t wait to go because I wanted to know more about this Man, Jesus Christ.  I wanted to feel the Holy Ghost.  I was always interested in religion and I thought I was on a search.

“Flying to Salt Lake City was a culture shock for me,” he continued.  “I didn’t think I’d have problems, but the people were just awesome.  Every time I attended a function, I’d get presents.  If you go in my library, I have 65 Books of Mormon.  They all had personal notes inside them.  I was getting more autographs than I was giving!”

Those books didn’t just grace a library shelf, however.  Thurl started taking copies of the Book of Mormon with him when he traveled.  “I wanted to know the people I was playing among,” he said.  Others of the Utah Jazz did, too.  They talked about religion often.  They speculated why blacks hadn’t held the priesthood in the Church for so many years.  Thurl wasn’t irate about the subject, though.  He just wanted to understand why.

About that time, Thurl met Sindi Southwick, a pretty blonde from Richfield, Utah.  The two began a relationship that was extremely costly to Sindi, whose parents didn’t speak to her for four years after she began dating the black, non-LDS basketball star.  Eventually the two were married in a civil ceremony in Las Vegas.

A sports career is never stable.  After eight seasons with the Jazz, Thurl was traded to the Minnesota Timberwolves.  From there he was traded to a team in Greece.  The year in Greece was a disaster, both for Thurl and for Sindi.  The country was foreign, the people spoke a language they couldn’t understand, and there was no effort made to make the couple feel at home.  The automobile that had been promised to the 6’11” basketball player was a Mini Cooper – a joke that wasn’t very funny to a couple who were trying to make a new start in a faraway country.  They returned home at the end of the season.  Sindi informed Thurl that he’d better not even think about playing in Europe again.

Thurl agreed.  He, too, had had enough of Europe.  But the Lord had other ideas, as he soon found out.  His agent called, with a message from a team in Italy.  After being 18th in a field of 18 Italian basketball teams, the team was about to go bankrupt.  They thought Thurl might make the difference they needed.

“I was a prayerful man,” Thurl remembered.  “I prayed that my Father in Heaven would tell us the place to be.  One night I was up all night praying.  In the morning I told Sindi, ‘I think we need to go to Italy.’  We fought about that for quite some time.  Finally she said she’d go.

“I got to Italy thirty days before she did,” he continued.  “None of my teammates spoke good English.  I’d call my wife every night because I needed someone to talk to.  Finally I asked her to find the missionaries’ number.  ‘Are you that lonely?’ she asked me.”

He was that lonely.

On their second visit, the missionaries brought their mission president to meet the basketball star.  President Joseph Halvor Clegg was so short that Thurl couldn’t see him behind the missionaries.  “I could hardly see him because he was so little,” he said, “but when I shook his hand I felt small.”  President Clegg was the fourth man in the chain of good examples that led from Thurl’s father to Dr. J to Thurl’s coach and back to Dr. J – men who influenced Thurl’s path for good.

“His smile was contagious,” Thurl said.  I asked him why blacks couldn’t hold the priesthood for all those years, and his smile just got bigger.  ‘Father in Heaven wants me to answer you this way,’ he told me.  ‘Thurl, it wasn’t time.  The blacks weren’t ready.  The whites weren’t ready.  We’re mortals.  We’re not perfect.  But you need to know the gospel is perfect.’

“For some reason, that opened something up in me,” Thurl said.  “I called my wife.  ‘I’m gonna be baptized,’ I said.  We cried long distance.  It was a very expensive cry, I might add.  My decision to give up what I’d been used to in the NBA in exchange for something that didn’t look like much” (playing on Italy’s basketball team) led to the biggest decision of Thurl’s life.

Today, Thurl is grateful for his African-American roots.  “I’m grateful for the ancestors who came before me and blazed the trail,” he said.  “My parents gave me a vision.  You can’t have a goal unless you have a vision.”

Before he ended his pro basketball career, Thurl repaid the Italian team that had been indirectly responsible for his baptism.  The team went from 18th place to the championship in that year.  “I know it wasn’t just by chance,” Thurl said.