Meridian in the Philippines: Why a Missionary's Love Never Dies | Meridian Magazine

Meridian in the Philippines: Why a Missionary’s Love Never Dies 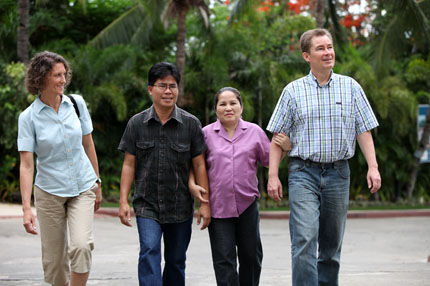 Note: Meridian’s editors, Scot and Maurine Proctor, are in the Philippines this week covering the Cebu City Temple dedication. This is the first in a series of articles we will bring you on this wondrous and historic event.

This is one of a series of articles brought to you in conjunction with The Academy for Creating Enterprise, a remarkable organization teaching impoverished returned missionaries in the Philippines, Mexico and Brazil how to lift themselves from poverty to prosperity through the creation of self-employment opportunities in areas where traditional employment is not available. To learn more about The Academy, now celebrating its 10th anniversary, please click here.

Every missionary to the Philippines is asked when he leaves, “When will you be back?” No one likes much to admit it, but for most of those who live half a world away, the answer is never. I will see you in another life, are the words that are left unspoken in goodbyes that echo across the ocean and the decades.

In the thirty years since Brad Gibbs served in Carcar in the Philippines, once in awhile he thought about one of his converts, Mary Responso. He asked every missionary who returned home from the Philippines, “Did you meet Mary?” to which he always got the same response, a shrug of the shoulders, a no. 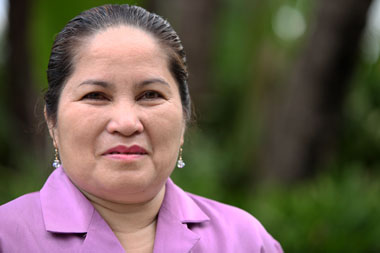 He liked keeping track of the people he’d baptized, but for a long time he had completely lost Mary. She seemed so thoroughly misplaced, he began to wonder if she’d died.

Yet he felt urged on to find her, especially since he and his wife Wendy and their two daughters were planning to go to the Cebu City Philippines Temple dedication in June. His experience with Mary had been so life-changing for both of them, if she were there he wanted to find her. 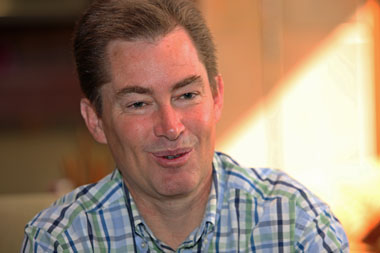 Brad started praying that he could find Mary again, impressed somehow to not drop the matter. Finally, one night at ten, he logged on to the New Family Search and did a search for the Responso name in Carcar, and found a listing in the 19th century. An email address was given for one of the sources, a woman in Canada. Brad wrote her, and within 24 hours she wrote back saying Mary was her niece and she was indeed alive.

Brad and Mary’s aunt Rae emailed several times back and forth, and finally Rae contacted Mary and offered to fly her to the Cebu City Temple open house. Brad had found her, and after thirty years, he would meet her again.

Why Did All This Matter? A Flashback

Roll the camera back thirty years to see why this matters. Young Elder Gibbs and Elder Wagner were tracting one day in the Philippines when they came upon a man named Lucio, who wanted to learn about the gospel. On the verge of joining a convent to become a priest, Lucio had second thoughts because he wanted a family. 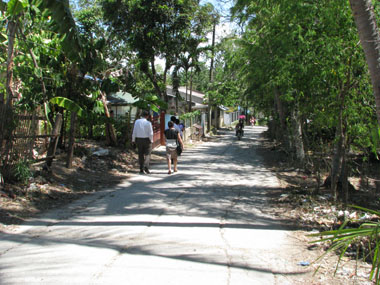 Yet when the elders arrived at his front door, in a pouring rain, Lucio wasn’t there. It seemed they had another stand up. Instead, Mary (his cousin) answered the door, and the tiny, spitfire began screaming at them, angry that they were Mormons. She was very active in the Catholic faith, protective of her family and told them never to come back.

Elder Wagner, who was heading home in a month, wanted out of the tropical downpour, and stayed at the door chatting with Mary for almost 45 minutes until she finally agreed to take them to where Lucio was working.

Mary led the elders through the jungle to find the hut where Lucio was working making shoes, and he said he was no longer interested in hearing from them. After all that trouble, Mary finally agreed that she would listen instead, thinking that she would use the time to make fun of them.

The elders started with an opening prayer and gave a lesson with their flip charts on Joseph Smith’s first vision. Such a strong spirit entered the room, Brad said, “I remember Mary looking up to see what was happening.”

Mary said, “It was a tremendous feeling that I felt.

I can’t explain it. I had a different feeling when they spoke, that even though they were young, what they were saying was true. “

Her attitude changed immediately. The hostility melted and by the end of the discussion when the missionaries bore their testimonies, Mary bore her testimony, too. What had happened was undeniable, powerful, like nothing else. The elders were teaching several others, but Mary jumped to the top of their priorities under the influence of such an outpouring. “We knew we had experienced something special,” Brad said.

Then the persecutions for Mary began. When the elders came to teach her again they found that the Book of Mormon they left had been burned, another destroyed. One time they arrived to find the Book of Mormon lying in the street in front of her house.

“Even the Catholic monsignor came over to me and said hurting words,” said Mary, “and all my relatives were throwing bad words at me. Probably, I was a very bad girl, because I had to turn my back on them, but I would never turn my back on the Lord. For me it was the greatest thing that had ever happened to me. I knew the truth and that’s the only thing I knew.” 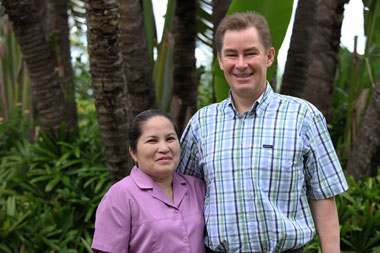 The belittling and rejection continued for Mary, and her brother Alan joined in the pack with some ferocity, but nonetheless, after a month, she was ready to be baptized.

At that time, Elder Gibbs and Elder Wagner were living in what was fondly called the haunted house, an old World War II wooden structure with an apartment upstairs and a first floor where the branch met. Outside they had a makeshift, hand-constructed cinderblock baptismal font.

Mary came by night by herself to be baptized to avoid the staring eyes of the neighbors and the persecution that would inevitably follow. The two elders were joined by a senior missionary couple, Elder George and Sister Velda Peterson. When the three elders confirmed her a member of the Church, again something powerful and unforgettable happened – something of a magnitude they hadn’t experienced before. “The spirit was so strong it felt like electricity went through all of us, and we felt it go into Mary,” said Brad. 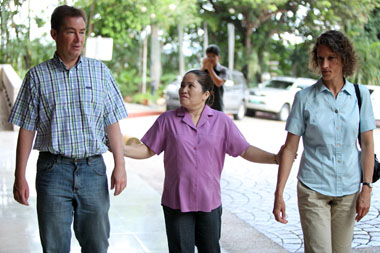 Mary walks with Brad Gibbs and his wife Wendy.

“After we sent Mary home, it was very, very emotional,” he continued. “We slept right there on the benches we were so exhausted from the Spirit. I never felt anything like it before. We did not have the strength left to get up to bed.”

Elder Wagner went home and Brad was transferred. Mary immediately started working with the sister missionaries, continuing to receive revilement wherever she went, even from the little children. That didn’t matter. She knew what she knew. Within a year she was on a mission. Elder Gibbs was still out in the field, and occasionally they corresponded.

“When Mary wrote and told me how many baptisms she had had in one month,” he said, “I thought she was talking about the whole mission.” 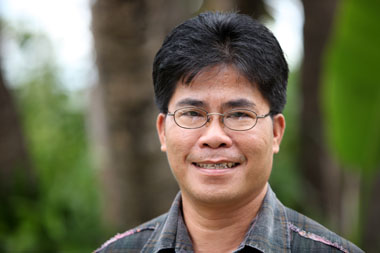 Meanwhile, a very important conversion would come from Mary’s mission – her younger brother, Alan, who had once so much revelled in calling names and reducing her to tears. He vividly remembered going to get water and shouting at the Mormon missionaries, but his shouts began to fade away as he thought about his sister.

What can be so important about what Mary is doing, Alan wondered, that she would leave home and family for 18 months and work this hard without pay? His question led to the missionary discussions, and the young men he had once reviled became the ones who brought him the gospel.

“She was the first missionary in our ward, and I was the second,” said Alan. Still he said, “I knew in my heart that I could not share the gospel with people and say the Book of Mormon is true, until I knew without any questions.” He finished the Book of Mormon on his mission, prayed intently about it, and then one night an angel appeared to him in a dream, blowing a trumpet.

He said when he awoke he needed no explanation that the Book of Mormon was true, and that month armed with new testimony, he helped bring 26 people into the gospel.

Back to the Present in Cebu

When Mary got word from her aunt that she wanted to fly her to Cebu, she said, “I just kept shouting for joy. 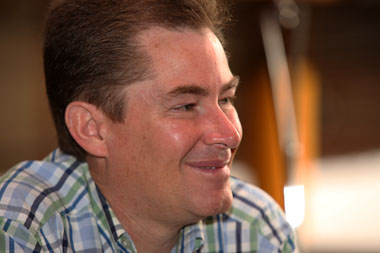 However, Alan Responso was the first to see Brad Gibbs. At the temple open house, “I told my wife to watch for a foreigner with a chin,” he said, referring to the cleft in Brad’s chin. She gestured with flamboyant excitement when he walked in. It seemed like a miracle to be reunited again. But it was the meeting with Mary that made it clear why her old missionary felt so impressed to find her. 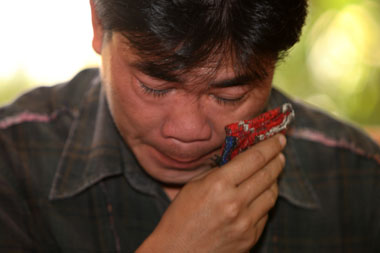 Bishop Alan Responso wept as he talked about their story.

Alan was a bishop now, but the news was less good for his sister. Mary, who had so valiantly withstood persecution, who had crept by night to be baptized alone, who had been picked out for such powerful witnesses, was no longer active in the Church and hadn’t been for twenty-five years.

She couldn’t stop weeping as she talked about it. The first Sunday she spent with Brad and his family, she bore her testimony in church. She said she had always been active in her heart and never less a believer. As she told her conversion story, the feelings were still stirring. Her problem was she had married out of the Church and her husband would not let her attend. 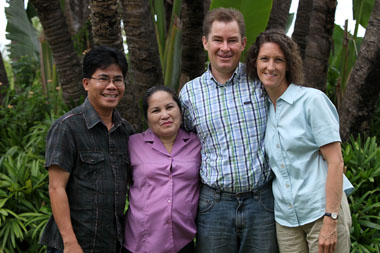 “Someday I will be active, again,” she cried. “I know I can figure out how to do it.” 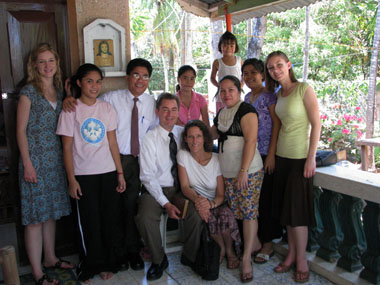 Brad and Wendy and daughters visit Mary and Alan and family. Photo provided by Wendy Gibbs.

As a vote of confidence in that heart, the Lord, who had sent Brad Gibbs to teach her three decades ago, sent him back again to remind her that she had not been forgotten by the One who had engraven her upon the palms of his hands. The Lord knows Mary Responso and he also knows Brad Gibbs, and who he can call again to a mission in the Philippines to rescue one he had rescued before.