Much like the man it reveals, Covenant Communications’ new documentary Stories From the Life of Porter Rockwell emerges with glaring imperfections but ultimately redeemed by things done right. Featuring insights and commentary by a variety of well-respected LDS history scholars, the film attempts to strike a balanced portrayal of a man some called a murderer, others a hero. 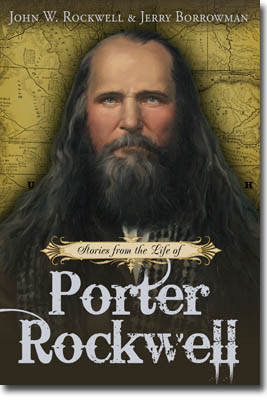 This balance in viewpoints is ultimately the film’s greatest strength and its greatest weakness. On the one hand, it is refreshing to have a variety of perspectives on this elusive historical figure. The fact that the film doesn’t shy away from controversy or whitewash potential history about the man is commendable. On the other, by more or less allowing the audience to decide where they stand on Porter’s character also means that the film doesn’t paint a clear picture of who he was.

To be fair, it can be said that the film attempts, and mostly succeeds, at showing the whole man, with his strengths and weaknesses, virtues and vices on display. The loyal friend of Joseph Smith and Brigham Young was also a drunkard. The lawman dedicated to justice may have also had a leaning toward vengeance. A man of family, a man of God, a man of the bottle, a man of blood…which was he? Or was he all of them? The film takes no firm position, and to me this was both aggravating and gratifying. On two things, it seems, all of the scholars in the film agree: Porter loved Joseph, and Porter was an excellent marksman.

As for the film itself, Richard Purdy is perfectly cast as Rockwell. He possesses a gritty integrity that makes him perfect for the role. The other actors, however, are a mixed bag, in many cases not enough care was taken, either in the casting or in the wardrobe/makeup, to make them appear of the time period portrayed.

A young woman playing young Porter’s wife, while likely a fine actress, looks very much like a BYU student wearing an 1800’s dress, with modern hair and makeup. Likewise, scenes that are supposed to take place in Palmyra and Nauvoo look very much like Utah Valley, and I’m quite certain I saw modern housing in the background of one shot, pulling me out of the attempted re-creation.

Of course, once the Saints arrive in Utah, all of the locations are more authentic. On the other hand, the cinematography is gorgeous to look at in many cases, and the musical score, while not what I would’ve expected, is memorable and well-utilized. For history buffs or those interested in learning more about this truly fascinating figure, the film is a recommended purchase. Also recommended is Richard Lloyd Dewey’s meticulously researched book Porter Rockwell: A Biography.