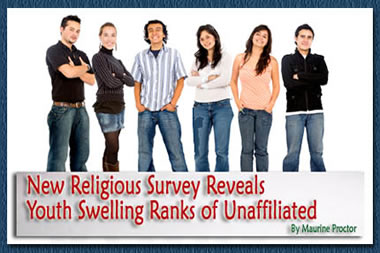 An extensive survey just released of more than 35,000 adults in the United States detailing the religious affiliation of the American public portrays a shifting world where Protestants are on the verge of losing their majority status, more than a quarter of Americans have left the faith in which they were raised for another religion, and one of the fastest growing groups is the unaffiliated.

“People will be surprised by the amount of movement by Americans from one religious group to another – or to no religion at all,” said Luis Lugo, director of the Pew Forum.

It is particularly noteworthy for Latter-day Saints with our emphasis on the importance of family for a stable society because the religious inclinations of Americans significantly affect the cultural and moral climate of the nation.

Michael Lindsay, assistant director of the Center on Race, Religion and Urban Life at Rice University, told The New York Times, “Religion is the single most important factor that drives American belief attitudes and behaviors. It is a powerful indicator of where America will end up on politics, culture, family life. If you want to understand America, you have to understand religion in America.”

The survey was conducted by the Pew Forum on Religion and Public Life, and this demographic report is the first of several reports that will explore other aspects of the religious life of Americans. The survey, which comes with several maps and charts, including a state-by-state chart of religious geography is available at the Pew website.

Latter-day Saints over 18, which according to the survey, make up about 1.7% of the nation shared with Hindus the distinction of being the most likely to be married (71% and 78% respectively), and shared with Muslims the category of groups having the largest families. More than one-in-five Mormon adults and 15% of Muslim adults in the U.S. have three or more children living at home. (For more on Mormons, see below.)

While a survey is meant to be a snapshot and not predictive of the future, still the details are fascinating and somewhat disquieting as it appears the youth are bleeding from the religious ranks.

According to the survey, the biggest gains due to changes in religious affiliation have been among those who say they are not affiliated with any particular religious group or tradition. That number (16.1%) is more than the double the number who say they were not affiliated with any particular religion as children for a net loss of 8.8 percentage points.

Among Americans ages 18-29, one-in-four say they are not currently affiliated with any particular religion. This is an important generational difference as it is more than three times the number of unaffiliated adults who are age 70 and older and nine percentage points higher than in the overall adult population.

It appears that many youth are abandoning the Christian churches of their childhood.

Pew researchers point out, however, that the unaffiliated are not all atheists or agnostics. Despite books like Christopher Hitchens’ God is Not Great, How Religion Poisons Everything, which have been bestsellers, the ranks of the atheists (1.6 %) and agnostics (2.4%) are not growing. One-third of the remainder of the unaffiliated still say that religion is important to them. They are the “believing, but not affiliated.”

Will these youth return to religious congregations as the baby boomers did? Pew researchers say there is some suggestion that this generation will not return to religion at the same rate that their parents did, and this could have a profound affect on the character of American religion and civil society.

The study says that religion in the United States is a vibrant marketplace where individuals pick and choose religions that meet their needs, and religious groups are compelled to compete for members with a remarkable movement by Americans from one religious group to another.

If change of affiliation within religious traditions (e.g. from one type of Protestantism to another) is included, roughly 44% of Americans now profess a religious affiliation that is different from the religion in which they were raised.

Which groups are the net winners and losers in this dynamic process of shifting religious affiliation? The survey shows that all groups are gaining and losing adherents; however, some of the losses are stark.

The mainline traditional Protestant churches that have played such a dominant role in American history now account for only 18% of the population, and Protestants in general – including Evangelicals – have decreased from two-thirds of the population in 1957 to only 51% now. We are heading toward the first time that America would see a Protestant minority.

The study reports that although a majority of Americans age 70 and older are Protestant, only 43% of young adults ages 18-29 are Protestant – a 19 point difference. These differences are particularly pronounced in the mainline Protestant churches, as many Evangelical groups continue stable and mainline churches fade.

The evangelical Protestant churches stand at 26.3% of the overall adult population, but they are also becoming more diverse. Pew researchers said, they have clout, but they may not be as united as in the recent past.

Catholics are currently 24% of the American population. Approximately one-third of the survey respondents who were raised Catholic no longer describe themselves as Catholic. This means roughly 10% of all Americans are former Catholics. These losses, however, have been offset – partly by the number of people joining the Catholic Church, but mostly by the disproportionately high number of Catholics among immigrants to the U.S. The result is that the total percentage of the population that identifies as Catholic (roughly one-in-four) has remained fairly stable.

They found that whites comprised 86% of the Church, Hispanics were 7%, and Blacks were 3%.

In education level, 18% of Latter-day Saints are college graduates and 10% have done graduate work. In this category again the Jews and Hindus make their marks, with 35% and 48% respectively having done post-graduate work.

The survey found that among the Latter-day Saints surveyed, 74% of members were born in the Church and 26% had switched affiliations.

Although the survey is accurate within less than 1%, the number of Latter-day Saints interviewed of the 35,000 was only about 560, thus these figures may not represent a completely accurate picture of the Church.

What is compelling about this study, however, is that Latter-day Saints have a stake in America remaining a religious country. Although we hope that our missionaries can find and teach people, we can only lament any changes that take America away from her religious moorings in other groups, because it is this foundation that supports family and morality.

It matters if the Protestants fade or the youth become gradually unaffiliated because it paints a picture for America’s future where not only behavior continues its dizzying decline, but our democratic institutions that depend on the morality of the people decline as well.