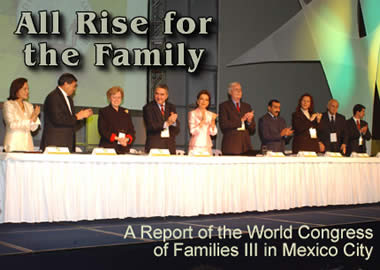 By Maurine and Scot Proctor

Meridian is at the World Congress of Families III meeting March 29-31 in Mexico City to bring our readers up-to-the-minute family news and scholarship and invite you into the network of people who are working to save the family.

At the very moment the UN Commission on Human Rights is meeting in Geneva considering whether to make faith-based criticism of the homosexual lifestyle a human rights abuse, 2,500 delegates from more than 60 nations–among them many Latter-day Saints–have converged in Mexico City for the World Congress of Families III to rally for the family.

The two meetings symbolize two radically different worldviews that have been coming head to head and will largely determine the future of humanity.  Though most people will know little of either gathering or may have only the slightest awareness that a war is raging with high stakes, the ideas that will eventually carry the day will profoundly affect all of us.

The World Congress has been convened by the Howard Center for Family, Religion and Society, Mexico’s Family Network and Family and Society.  Supporting organizations include Brigham Young University’s World Family Policy Center, United Families, Focus on the Family, Real Women of Canada, the Catholic Family and Human Rights Institute and many others.

The scholars, politicians, clergy, and pro-family activists at the World Congress of Families III see the family as the bedrock of society and the only hope for peace and freedom.  They have come together in this 10th anniversary of the International Year of the Family to network and propose a common agenda to counter-act the anti-family agenda that is sweeping the world and devouring moral structures at a pace few could have foreseen just a few years ago.

This is a kick-off event for a series of international meetings to mark the year and an opportunity for the family effort to go global.  Earlier conferences in 1997 and 1999 were held in Prague, Czech Republic and Geneva, Switzerland from which many new pro-family groups were spawned or revitalized.

The delegates will consider such meaty questions as:  what are the possibilities for a common agenda?  How can the family perspective be incorporated into legislation, public and private policy, program design, mass media, economy and human rights?  Can there be personal and social development without the family?

At this conference a rabbi shares the platform with the Secretary General of Qatar.  The former president of the Southern Baptist Convention addresses Catholic pro-family leaders from Uruguay and Costa Rica.  Mexico’s First Lady, Martha Fox, in a beautiful pink suit, tells the crowd that the future of mankind will be forged in the nucleus of the family.

President George Bush sent his personal greetings to the Congress:  “Around the world, families are the source of help, hope, and stability for individuals and nations.  As one of the pillars of civilization, families must remain strong and we must defend them during this time of great change.  To ensure that America’s future generations are prepared to face new opportunities and challenges, my Administration has taken important steps to promote strong families, preserve the sanctity of marriage, and protect the well-being of children.”

The threat to the ongoing existence of the family has forged new international bonds, but none too soon.  Those who would unravel the family in the name of feminism, environmentalism, socialism or the sexual revolution are decades ahead in their planning and funding.

Jsus Hernndez, president of the Family Network, addresses the conference.

“We have gathered here to demonstrate our confidence in mankind,” said Jsus Hernndez, president of the Family Network.  “What is it that joins us who are people of different nations, cultures and religions?  It is our faith in the family with all its wealth, both material and spiritual, human and transcendent. The 21st century is endowed with great technological development, but the accomplishment of peace is the great aspiration of mankind.  We have to speak of the solidarity of the family, for it is the well being of all people as well as the harmony of society.”

The sense is that this gathering is not just about family, but about the well-being of nations, and those who are gathered for these three days of meetings are hoping to be the catalyst to awaken others to join in the most important dialogue of our time.  The health and welfare of the family, said one speaker, will reflect the health and welfare of each nation.

Bonnie Parkin, General Relief Society president, said, “Everyone can make a difference in standing up for family.  You have to look around and start where you are.  Become educated.  Alert your neighbors and friends to what’s happening.”

Why Are We Here?

Dr. Allan Carlson is one of the great defenders of the family in all the world.

Dr. Allan Carlson, of the Howard Center for Family, Religion and Society, noted that forty years ago, asserting that family is the fundamental unit of society entitled to the protection of the state would have been considered a routine comment, so obvious as to be banal. The spirit of the family was alive and well in the 1948 Universal Declaration of Human Rights in the United Nations which was filled with family affirmations such as “Motherhood and childhood are entitled to special care and assistance” or “Men and women of full age. have the right to marry and found a family.”

“Today,” Dr. Carlson said, “every one of these principles is deeply controversial, under assault, in many individual states and at the United Nations.  It is fair to conclude, I believe, that the very basis of social order is now at risk.”

He told conferees they were gathered “to acknowledge that the natural family is established by the Creator and inscribed in human nature.  To live in families is to be in harmony with this Divine intent and with the order of the Creation.

“We are here,” he said, “to affirm the marriage of man to woman as the first and necessary social bond, the foundation of civil society.  Marriage holds such distinction for it is natural and self-renewing, rooted in the mutual attraction of man to woman, beings who feel their incompleteness when existing alone.

“In this civic sense, marriage is also the true reservoir of liberty.  It exists prior to other human bonds, be they village, city, state, or nation, and it has the endless capacity for renewal, even in periods of persecution or social and moral decline.  In the modern age, as ever before, each new marriage is an affirmation of life, love, and human continuity over against the darkness.  Every new marriage of man and woman is also an act of defiance against ambitious political and ideological powers that reduce human activity to their purposes.

“More broadly, marriage is the solution to human society’s universal dependency problem.  Every community must resolve the same issues:  who will care for the very young, the very old, the weak , and the infirm?…

More than 2,500 delegates have gathered here in Mexico City to praise and defend the family.

“Marriage is also a covenant between the couple and the broader community.  The bearing of children within marriage offers the best promise of new community members who will be supported and trained by parents without becoming a charge on others and who will grow into responsible adults able to contribute to the community’s well being.

“Predictably, children reared within natural marriage will be healthier, brighter, harder working, and more honest, dutiful, and cooperative than those raised in other ways.  They will be less likely to slide into violent, abusive, or self-destructive behaviours.  As such, each marriage represents the renewal of a community through the promise of responsible new citizens to come.  When the marital institution weakens before hostile policies or ideologies, then the social pathologies of suicide, ignorance, crime, abuse, poor health, and crippling dependency surely grow.

“We are here,” Dr. Carlson said, “to affirm the proper role of government as a servant of families.”  The structure of the state may vary from place to place, he said, but “the guiding principle is the limitation of the central power.”  When families fail, then individuals “tend to become wards of the Leviathan state” for all the functions that had been filled by family become absorbed by the state.  Undermined families lead to big, over-reaching government which fills the vacuum left behind.

Pat Fagan, of the Heritage Foundation, presented a ream of slides which illustrate the devastation failed or absent families leave in their wake.  “Social sciences well done cannot but illustrate divine, natural order,” he said.  The statistics in favor of supporting intact, natural families as the healthiest and best place to raise children are staggering.

Drawing on scores of studies he demonstrated that intact, natural families have a higher chance of being spared from poverty, have higher incomes and a higher net worth.

“Divorce in a family has a bigger impact on them than the great Depression,” he said. “Any government that doesn’t pay attention to the health of its marriages and children, will also find it is destroying its capacity for capital formation.”

Statistics become even brighter when that intact, natural family also worships together.  Belief in God and family are essential components for all around physical and mental well-being.

Cardinal Alfonso Lopez Trujillo of the Vatican spoke clearly and succinctly to the leaders of the world.

Cardinal Alfonso Lopez Trujillo of The Family Pontific Council issued a call to the leaders of the world.  He said that they had a heavy responsibility on their shoulders and the possibility of making mankind a garden or a ruin based on how they support and strengthen the family.  “If no special attention is given to families, we’ll be denying to mankind something as important as the air he breathes and the blood in his veins.  Those who are constantly hostile to the cause of families are perpetuating a kind of historical suicide.  They are killing themselves and not laying a better foundation for the world.

“The best investment in an economic sphere is the investment around the truth of the family.  It deserves the attention of all the parliaments of all the lands.  There is no more poverty, nor pain than not having a family, nor riches than to be loved and held with tenderness and know that you are made in the image of God.

On day one of the Congress, delegates listened through head phones to speeches in Spanish and Arabic.  They attended sessions on bioethics, homeschooling or the implications of a unisex world, but mostly they become energized.

Joy Lundberg, of the World Family Policy Center said, “You can feel the swelling of confidence and the surging of power here among the people who believe in families as they connect with each other.  As she and her husband have passed out free CDs in four languages of a new song by Janice Kapp Perry called “Save the Family,” one man said to her, “Until now, I thought I was alone, and I always thought that people from the United States didn’t care about families.”

This man got a new look at things as United Families’ Sharon Slater was working on a petition for the UN, Professor Richard Wilkins was choreographing a press conference calling for a family meeting in Qatar, Reach the Children’s Kevin Clawson was chatting with a friend about building schools in Africa and Family Action Council International’s Tanya Skeen was talking about the latest meeting at the school board in her home town where they were voting on including sexual orientation in the curriculum.