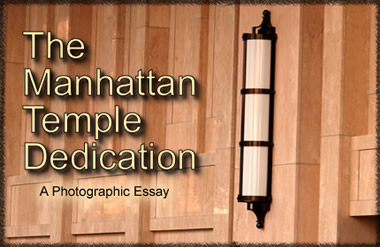 “Welcome to the most important day in the history of New York City!” said host Dave Checketts at the opening of the jubilee celebration for the Manhattan Temple dedication June 12.  It was a bold statement and true.  New York City will never be the same and Latter-day Saints had gathered together to rejoice in the completion of The House of the Lord.

On behalf of Meridian, Maurine and I have attended several temple dedications.  This dedication was unique and certainly offered photographic challenges to us that the others had not.  You can visit any of these other dedications with us (photographically and in words) here:  Nauvoo  Freiberg Germany  The Hague Netherlands and Accra Ghana.

I had been thinking about this photo essay for some time and it was clear how I should organize the photographs.  You will see the essay in five or more parts.  I try to break it up so it won’t be too hard to download.  The first section I just call “The Temple Itself.”  The second part is “This is New York City.”  The third series is simply “The Gathering of the Saints.”  The fourth is “The Coverstone Ceremony.”  The fifth is “The Children and the Youth.”  Maurine took copious notes throughout our time there.  We ran into lots of friends, got to hear from President Hinckley and Elder Robert D. Hales.  We felt like this was a reunion and a celebration.

We’ve decided to do fairly short captions on the photographs and have a running text of quotes and the words of the Prophet as he addressed the youth jubilee the night before the dedication.  In some parts it may just be captions. As I have said so many times, I always feel like I have a sacred trust to give you a good view and step up front to make sure you can see well through the lens of my camera.

It is very difficult to take pictures of the Manhattan New York Temple without including yellow cabs, street signs, stop lights, and many other city items.  I thought first of all you would just like to get a feel for the temple itself:  the building, the landscaping, the outside windows, the setting. 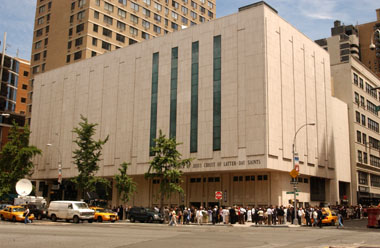 The temple is on the corner of Broadway and Columbus Street between 65th and 66th Street.

Scott Trotter, Director of Church Public Affairs in New York City, said of the media coverage,  “We are just astounded.”  Their PR staff has been working sometimes 14-hour days to be ready for the onslaught of coverage.  Around the world over 170 newspapers have covered the story.  After The New York Times and USA Today ran articles on the temple, the floodgates burst open and suddenly the Manhattan temple became a topic for many major media outlets including–CNN, NPR, World News Tonight, the Washington Post, The Wall Street Journal. 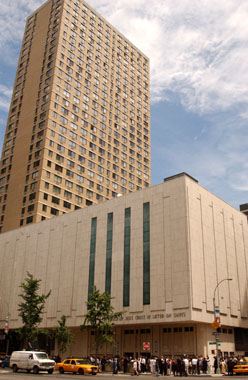 The temple is part of a larger building that is owned by the Church. It is just moments away from the Lincoln Center for the Performing Arts across the street.

Elder Ralph and Sister Sharon Larson, public affairs missionaries said at the press conference before the temple open house, reporters toured the temple first before they asked their questions. The peace of the temple seemed to open their hearts to ask a different, deeper kind of question. 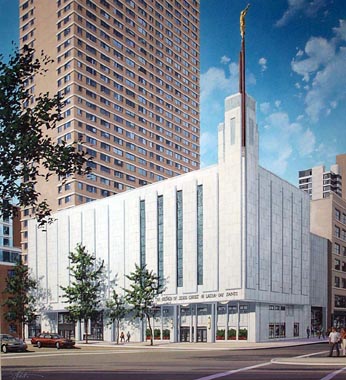 Artist rendering of the temple as it will soon appear with a spire and a statue of the Angel Moroni. Copyright 2004 Intellectual Reserve. All rights reserved. Used by permission.

Sister Larson said, “As we talk about our Heavenly Father’s great plan of happiness, people have this longing look in their eyes.  There is no better way to explain the restoration than in temple.”

Because the temple was built in the same building where the members were attending Church, they had responsibilities to clean weekly and then daily. They sometimes went to Church meetings amidst rubble. 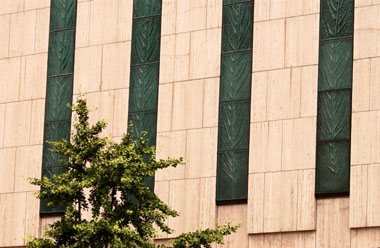 Beautiful glass graces the western façade of the temple.

Elder Ralph Larson told us that one young woman came from France and said she had four questions about the Church.  At the end of the tour she just stood in the Celestial Room and wept.  She said that all four of her questions had been answered like a video playing before her eyes.  “The Lord does his work in his house.” 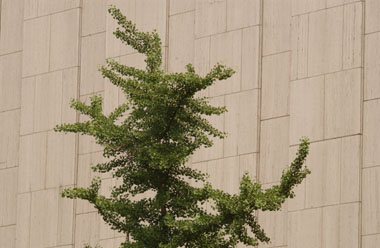 Tree framed by the western façade of the temple

Sister Sharon Larson recalled one visitor who came through and said she always thought she would be married out in nature close to God, but now she knew that this temple was what was close to God. 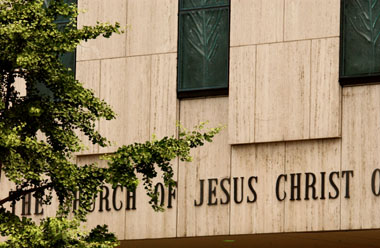 The name of the Church upon the outer wall of the temple.

During the open house, people didn’t want to leave, but lingered at the temple to feel the peace. Elder Larson said, “We invited all the neighbors, both business and residents in the area.  Almost 54,000 came through.  Already have been 3 baptisms with 6 more scheduled in the NY North mission.” 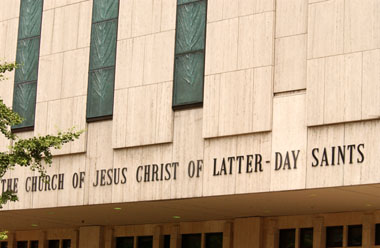 Many people in New York City are familiar with the Church.
No Comments | Post or read comments