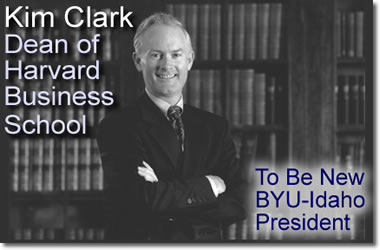 The Harvard Business School class of ’79 that gathered last year for its 25th reunion, is about as star-studded a group as is imaginable.  It included the CEO of the New York Stock Exchange, the Secretary of Labor, the inventor of the computer spreadsheet and the CEOs or presidents of eBay, PepsiCo, Staples and MTV.

Yet, it was the B-school dean, Kim Clark, who got the standing ovation, when he said his highest priority at the school was a new mandatory course on values and leadership, and offered his pledge to “live my life and lead the school in a way that will earn your trust.”

The trust he has earned goes beyond the Harvard community as he has been named to take the reins at Brigham Young University-Idaho.  He will step down from his position at the Harvard Business School on July 31st.

President Hinckley made the announcement from the Conference Center in Salt Lake City in a broadcast to faculty, staff and students at BYU-Idaho.  Clark will travel to Rexburg to be formally introduced to faculty and speak with students at a devotional assembly today.

In making the announcement, President Hinckley expressed his confidence in Clark’s leadership, “I know President Clark will carry on the tradition of academic excellence at BYU-Idaho and further notable achievements made in transitioning to a four-year university.”
Dean Clark’s Work at Harvard

Clark, whose career at Harvard has spanned almost three decades, with 10 of those years as dean of the business school, wrote a letter to his Harvard colleagues summarizing the work he has done:

“This is a bittersweet moment for me.  I arrived at Harvard University as an undergraduate, and it has been my home for more than 35 years. My tenure at HBS — as a faculty member and, for the past decade, as Dean — has been an extraordinary experience, one both professionally and personally rewarding.  And I have been fortunate to serve as Dean during a period of remarkable renewal at the School.

“We have launched innovative and important new initiatives, in entrepreneurship, in information technology, and in globalization, to name a few.  Each of these, and many others underway at the School, enriches the classroom experience for our students and helps the faculty develop new insights with power in practice.”

What particularly has been important to him, however, was the leadership and values initiative.

According to Bloomberg.com, Clark introduced the ethics class in the wake of scandals at companies including Enron Corp. and WorldCom Inc., saying the school should help students “make the right decisions.”

In an interview with Meridian, Dean Clark said that when the Harvard Business School was founded in 1908, its purpose from the beginning was “to educate leaders who brought higher standards to the business world and a completely different sense of values and integrity to the work. 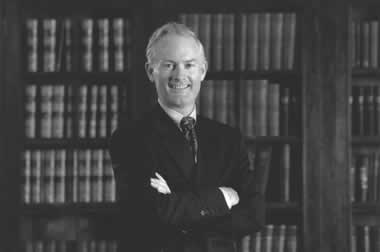 “What’s different today,” he said, “is the extent to which we have made this very explict in the community. It is very public.  We have created visible activities and processes that reinforce the importance of values. We have consciously tried to bring these issues much more squarely to the center of public life at the school than before.

“It starts when people are admitted,” said Clark. “It is in the way we talk about the purpose of the school.  In the admissions process, we ask people to write about their experience with ethical dilemmas.  We interview every student that we admit and try to probe these dimensions.  We ask them to read very carefully the statement of our community standards, sign it and return it.  It is a commitment that they make to live by those standards as part of their matriculation at the school.

“When they arrive on campus, we have a convocation where we talk about it.  In our course on Leadership Values and Decision Making, questions are embedded that confront general managers in real situations.  Community standards are displayed on the wall of every classroom so that every day in class they are before the students’ eyes.”

Dean Clark said that at Harvard, they know they are creating business leaders whose outlook will shape the business climate not only of the United States, but the entire world, and therefore the emphasis on values has been a central focus.

He said, “Do we need leaders whose central focus is values? Yes, emphatically, desperately.  Do we have a crisis?  My own sense of that is that we have both a crisis, but much more important a great opportunity.”

“There are three core values that we have established as central to both leadership in general and learning in the school.  They are integrity, respect for other people and personal accountability. Those now define what we call our community values. These are the basis and the expectations we have for one another in the community and also the framework in which we expect our work to take place.

A Reflection of Integrity

Good as his word, Kim Clark’s own life has been a reflection of integrity and deeply-held standards. “I made a decision a long, long time ago that I didn’t study on Sundays and I extended that rule and kept it my whole life.”  This was true through both an undergraduate and Ph.D program at Harvard where students often study voraciously and ceaselessly to stay afloat in a highly competitive environment.

“I extended rules for the use of my time,” he said, “when I started to have children.  I built some walls around my time at home with the family so that my work didn’t intrude upon it.  I have a rule which I have maintained that I don’t work at night and I don’t work on weekends.  I’ve tried hard to maintain it and be rigorous about it.  It gets violated now and then because I have to travel.

“It doesn’t say you can’t get up early.  Basically I learned a really valuable lesson from good friends and colleagues that your success in the kind of work that I do, depends somewhat less on the number of hours you put in and a lot more the productivity of that time and the quality of the thought that goes into it.  I tried to make progress on the basis of making really good use of the time that I had.

“The other thing I did internally is that I built walls around what I saw as productive time.   As a dean, I have gotten to work early and I don’t talk on the phone or have appointments until noon.  That meant I could get in probably four or five or sometimes six hours of quality, concentrated focused time to write or to work on papers or whatever I was doing.  The afternoon has been a time for interacting and appointments.

“I usually get home at 6:30 and then I was at home for the family.  I tried to carve out the weekend in the same way for family.

Our house was busy with family and Church commitments.”

Clark has been the bishop of the married students ward in Cambridge, a counselor in a stake mission presidency, and was the executive secretary of his ward during his first five years as dean.  He worked closely with public affairs during the building of the Boston temple.
His Personal Philosophy

As to his personal philosophy, he said, “It is very simple.  I learned long, long ago to follow the counsel given in Alma 34 where Amulek gives a great speech and counsels to pray over all your flocks and over all your households and over your fields.  Since I don’t have too much in the way of flocks and fields, I took that to heart and I have made everything I do-my family and my work down to the details of issues–a matter of prayer throughout my whole life. I have been greatly blessed with the gifts that come with the Spirit and the inspiration of the Holy Ghost.”

During his nearly ten years in office, Clark oversaw a 20% growth in the faculty, as he focused on expanding the range of the school’s research with power in practice while also strengthening its well-known commitment to course development and teaching.

During the same period, the School’s endowment rose from $550 million to more than $1.8 billion, providing a solid base for attracting the best students and faculty, and increasing global impact and outreach. The School’s 42-acre campus was also renewed and transformed by the addition of more than 325,000 square feet of new facilities, including housing, a student center, classrooms, and an expanded library.

Speaking via satellite from Harvard about his new appointment, Clark said, “I am deeply honored to have been chosen for this important role.  I am tremendously excited to be joining BYU-Idaho, and I look forward to working with everyone in the community in facing the opportunities that lie ahead.”

The First Presidency announced in 2000 that Ricks College would become BYU-Idaho, changing from a two-year junior college to a four-year institution.  The transition to a year-round baccalaureate-granting university occurred in the fall of 2001.  BYU-Idaho is part of the Church Educational System, which includes Brigham Young University-Provo in Utah, Brigham Young University-Hawaii in Laie, LDS Business College in Salt Lake City and seminaries and institutes of religion throughout the country.

Clark, 56, succeeds Robert M. Wilkes who was appointed interim president on 1 December 2004 after BYU-Idaho President David A. Bednar was called as an Apostle of The Church of Jesus Christ.

Clark has been Dean of the Faculty at Harvard Business School since 1995, and is also the George R. Baker Professor of Administration.  A member of the Harvard Faculty since 1978, Clark received the B.A. (1974), M.A. (1977), and Ph.D (1978) degrees in economics from Harvard University.  In addition to his research on modularity in design and the integration of technology and competition in industry evolution, he is the co-author of the book Design Rules: The Power of Modularity (MIT Press, 2000).

With a powerhouse like Kim Clark leading BYU Idaho, the future for the school can only be bright.