When President Hinckley entered the Arco Arena, for the member meeting preceding the youth cultural celebration, 17,000 people leaped to their feet, clapped and cheered — many of them teenagers.  These weren’t the polite cheers born of obligation.  Instead, they were spontaneous, joyful — a prelude into breaking into singing, “We Thank Thee O God for a Prophet.” 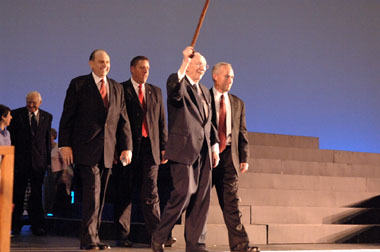 Camera flashes staccatoed through the audience. (President Hinckley, who is patient with this process, once joked, “If all the cameras were thrown into the ocean, there would be a great flood.”) 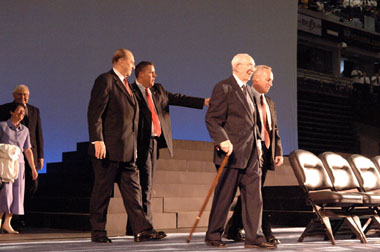 Elton John is the next person who will appear on the stage at the Arco Arena, and it would be surprising if even an entertainment star like him received close to the ovation President Hinckley received. 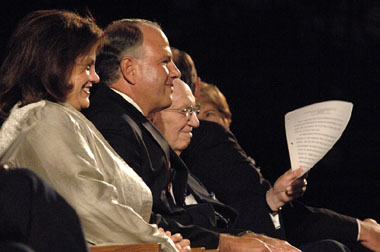 Latter-day Saints simply love their prophet — and he loves them too.  “My but you look good,” he said.  “You’re beautiful.  You young people are beautiful. Thank you for coming and thank you for affording me this opportunity.”

President Hinckley also mentioned his age — as he often has in such gatherings lately. 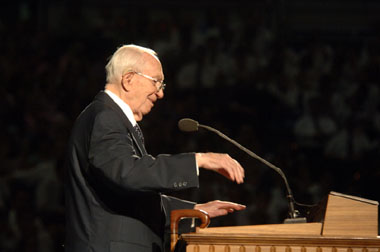 “This is a wonderful day for the members of the church in the great state of California,” he said. President Hinckley, always aware of history, told the crowd that this temple dedication is really the culmination of a long history of Latter-day Saints in California.

In 1846 members of the Mormon Battalion came to Coloma on the American River, not far from Sacramento.  As they had been released from service, they were counseled by Brigham Young that those with families should go home and those without families should stay and work through the winter. Some 110 of them stayed in the Sacramento area and worked to send money back to the Saints. 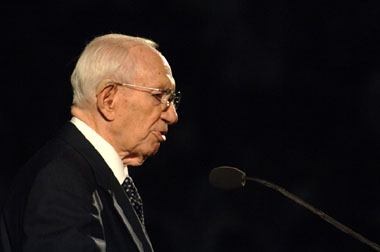 President Hinckley noted that on January 24, 1848, Henry Bigler noted in his journal that some metal that looks like gold was found at Sutter’s mill.  That same day, James Marshall, Sutter’s foreman picked up some gold.  They tried to keep it a secret, but Sam Brannon rode through the streets yelling, “Gold, gold, gold.”

Prospectors came from across the country.  Many came through Salt Lake, where they traded their tired horses for fresh ones. 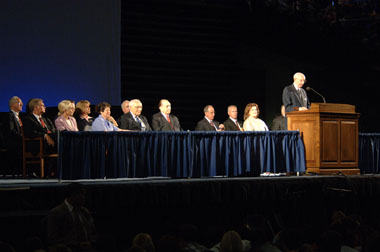 One Latter-day Saint wrote of using his trousers to pan for gold, tying them at the bottom to catch the river silt.  At the end of the day he put the pants on again.  But then, despite, all the lure of gold, and though people were flocking toward California with treasure in their eyes, this man, and many like him, loaded their wagons and left the gold behind.  Following a prophet, they headed to Utah to “grub sage brush the rest of their lives.” 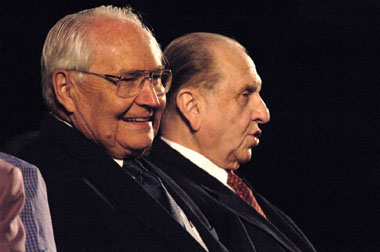 Elder L. Tom Perry said, “What a privilege it is to be here at this glorious time of dedication, a time to rededicate ourselves to following a prophet.”

President Hinckley said of the Sacramento area, “The Church has now reached full maturity.  When we came here a few years ago, looking for a temple site, we went all over this area and finally determined that we had a better site at Rancho Cordova than many we had seen.” 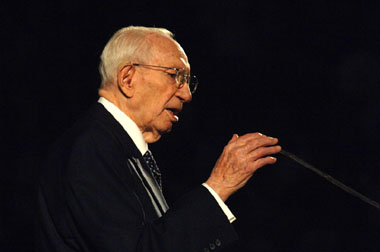 President Hinckley said that the temple that was to be dedicated the next day “is magnificent and stands as a testimony to the world of our belief in the immortality of the human soul.”  He said that it was strange to him that Christians throughout the world celebrate the resurrection of our Lord, but do very little to celebrate the resurrection and the future it holds on behalf of all man.  “We can contribute to that gift as we accomplish the work to be done in temples,” President Hinckley said.

Choose You This Day

President Thomas S. Monson, First Counselor to President Hinckley told the young people, “We talk about free agency and every one of us here tonight, young and old, have choices to make in life.  Our futures will depend on the choices we make.” 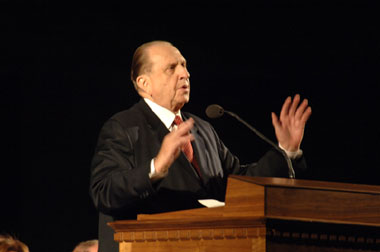 He quoted “Know This, That Every Soul is Free”

Know this that every soul is free
To choose his life and what he’ll be;
For this eternal truth is giv’n;
That God will force no man to heav’n.
He’ll call, persuade, direct aright.
And bless with wisdom, love, and light,
In nameless ways be good and kind,
But never force the human mind.

President Monson gave some guidelines to help youth make good choices.  First he said, we need to remember to choose where we want to go.  He reminded the teens of the dialogue between Alice and the Cheshire cat from Alice in Wonderland. Alice came to a fork in the road.  “Which road do I take?” she asked.

“Where do you want to go?” responded the Cheshire cat. 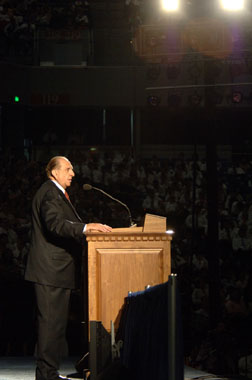 We have to know where we want to go.  So that youth know the answer to that, President Monson said that a guideline is “I will listen.”  He said, let us be good listeners to our parents and for that sweet spirit of direction from the Holy Ghost.

The next guideline he said is “I will learn,” and the final guideline was “I will labor.”  He said the words of Nephi “never tire in my mind.”  Nephi said, “I will go and do the things which the Lord hath commanded” (1 Nephi 3:7).

In speaking of the temple dedication the next day, President Monson quoted from the third chapter of Revelation: “Behold, I stand at the door, and knock: if any man hear my voice, and open the door, I will come in to him and will sup with him, and he with me.”

“Let’s listen for that little knock from the Lord, that sweet prompting. That’s the spirit we will seek in his holy temple tomorrow when it is dedicated.” 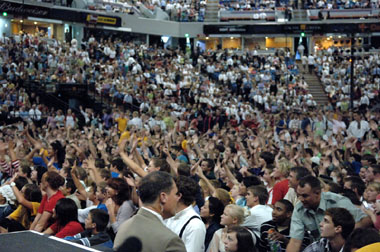 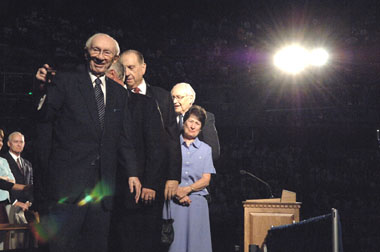