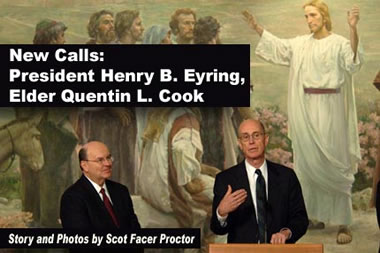 During the first few minutes of the first session of general conference, President Gordon B. Hinckley announced the calls of Elder Henry B. Eyring to serve as the second counselor in the First Presidency and Elder Quentin L. Cook to fill the vacancy in the Quorum of the Twelve Apostles.

It has been 12 ½ years since there has been any change in the First Presidency – which marked the passing of President Howard W. Hunter and the sustaining of President Gordon B. Hinckley as the President of the Church. This was the same meeting when Elder Henry B. Eyring was called into the Twelve. 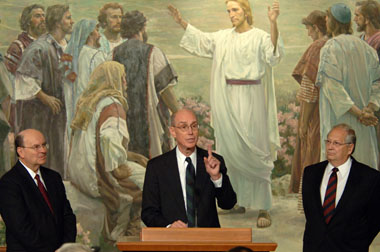 After the first session of conference, a press conference was held so that journalists and photographers could get an up-front-and-personal time with the two new leaders. It was a tender and wonderful forty minutes to spend with these brethren. Both were emotional and humbled by their new callings. 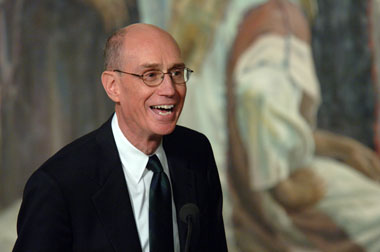 President Eyring was asked when and where he had received the call. “Those are private moments,” he said. “It was not in a room. It was a phone call. It was President Hinckley on the line. The way in which he spoke to me was so personal and so endearing.He asked if I would be willing to join President Monson and Him in the First Presidency which is the most marvelous way of extending a call which was from the Lord and clearly revelation.”

He said that it came with “a feeling that I would do anything that he asked because you knew it was from the Lord.” He choked with emotion as he recalled the stunning phone call that came around 4:30 or 5:00 in the afternoon of Thursday before conference. President Eyring is the 24th man to be called as a second counselor in the First Presidency.

President Eyring served twice as Church Commissioner of Education and in several leading councils of the Church before becoming an apostle in 1995. He also served in the Quorum of the Seventy and as the first counselor in the presiding bishopric of the Church. He also served as the president of Ricks College (now BYU-Idaho). He holds a B.S. degree in Physics from the University of Utah and Master of Business Administration and Doctor of Business Administration degrees from Harvard University.

When Elder Cook was asked about his new position he said, “This has been an overwhelming experience for me. As you know, in the Church we neither seek nor have any expectation that calls will come to us, and I certainly had no idea that this call would come.” He said, “I accept that call and pledge that I will do everything that I possibly can .I have a testimony of this gospel. I love the Savior. I believe that President Hinckley is a prophet of God and I sustain him with all of my heart . And I pray that I will be able to serve with distinction in this new call.” 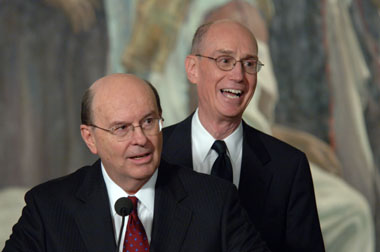 One reporter questioned Elder Cook’s call in a global church, based on his having been born and raised in Logan, Utah. Elder Cook answered, “Well, we accept President Hinckley as a prophet and that these [calls] come from the Lord. I do want you to know that I spent 33 years of my life in California. I was president of the San Francisco Stake and counselor there, and during that period we had two Spanish branches, two Tongan branches, a Samoan language unit, a Filipino-Tagalog unit, a Mandarin Chinese unit, and in my calling to serve in the Seventy I started out with two years in the Philippines and three years in the Pacific.” 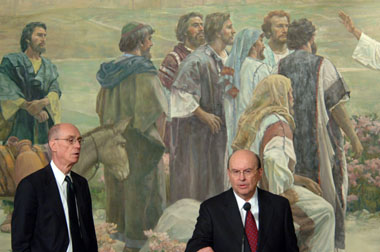 Elder Cook served as the President of the North America Northwest Area, and also presided over the Philippines/Micronesia Area and the Pacific Area of the Church. Most recently Elder Cook served as the executive director of the Missionary Department. Elder Cook received a bachelor’s degree in political science from Utah State University and a juris doctorate degree from Stanford University. He has served as a bishop, stake president and counselor, regional representative and Area Authority. Elder Cook is the 95th man to be called as an apostle in this dispensation.

When President Eyring was asked to say a little bit about the passing of President James E. Faust he said, with great emotion, “When I first learned of his passing I learned it from President Packer. And I said to him: ‘He’s who I always wanted to be when I grew up.’ President Packer assured me there was still time.” 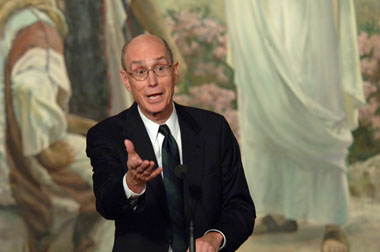 One reporter questioned if the Harvard and Stanford educations of these brethren played a role in their calls and if that was a signal from the Church about education of its leaders. President Eyring said that he could only answer that with a story.

Lesson from a Leader

“When I first came as the President of Ricks College,” President Eyring began, “I attended my first meeting that I’d ever been in watching the general authorities of the Church, the First Presidency and others running a meeting.

“I had been studying for the ten years I was a professor at Stanford how you make decisions in meetings, in groups, so I got a chance – here’s my chance to see how the Lord’s servants do it of which I now am one – but I looked at it with my Harvard-Stanford eyes.

“And I thought, this is the strangest conversation. Here are the prophets of God and they’re disagreeing in an openness that I had never seen in business. In business you’re careful when you’re with the bosses, you know.I watched this process and they were disagreeing, and I thought ‘good heavens,’ I thought revelation would come to them all and they’d all see things the same way in some sort of way. And it was more open than anything I’d ever seen in all the groups I’d ever studied in business. I was just dumbfounded.

“But then after awhile the conversation cycled around and they began to agree.

And I saw the most incredible thing, that here are these very strong, very bright people all with different opinions and suddenly the opinions began to just line up and I thought ‘I’ve seen a miracle. I’ve seen unity come out of this open exchange that I’d never seen in all my studies in government or business or anywhere else. And so I thought, ‘Oh, what a miracle.’

“Then, it was President Harold B. Lee who was chairing the meeting .and I thought now he’s going to announce the decision. I’d seen this miracle, and he said, ‘Wait a minute. I think we’ll bring this matter up again some other time. I sense there is someone in the room who is not yet settled.’ And they went on to the next item, and I thought, ‘That is strange.’ And then I watched somebody, one of the brethren, I think one of the Twelve, walk past President Lee, and say, ‘Thank you. There’s something I didn’t have a chance to say.’

“So, I want you to know . we’re in another kind of thing here. This is what it claims to be this is the True Church of Jesus Christ. Revelation is real even in what you call the business kinds of settings.” 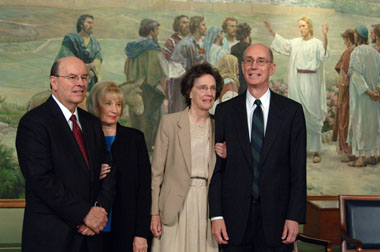