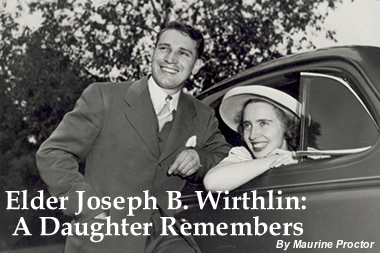 I’ve known Madeline Wirthlin Stover, Elder Joseph B. Wirthlin’s daughter, since we were in college together at the University of Utah . We were thrown together as freshmen, and I could not help but notice how she quietly and without fanfare went around in the service of others. We were members of the same sorority and after our Monday evening dinners for 50, she was the one who so often gathered up the dishes, put back the chairs, saw to the unspoken needs of others. While others were caught up in the chatter of college girls, I noticed how often she just saw what needed to be done, and did it.

I remember thinking that she must have come from a great family to have such charitable insight at such a young age. She was mature, knowing, put together.

As I came to be acquainted at a distance with others of her siblings, that impression was verified. Here was truly a powerful family, grounded in the gospel.

We spent a few moments on the phone together talking about her father, Elder Joseph B. Wirthlin, laughing and tearing up, at the legacy he has left behind.

“You think people that you love can just go on forever,” Madeline said. “It’s hard to believe that he’s gone.”

Madeline said, “My mother died two years ago and he has needed help since then. Our family has taken turns staying at his home over night. My night was Friday, and we had lunch together every Wednesday, and it has been the sweetest experience to have so much time alone with him. I just loved going to his home. It was never a sacrifice.”

She said that Elder Wirthlin had known great sorrow since the death of his wife, Elisa. He would sometimes say, “I don’t know why the Lord took her before me. I was supposed to go first,” and then he’d tease, ‘I’m going to have to speak to someone about this.”

Madeline said, “I just kept telling Dad that people who have gone through this will be quicker to listen because they will know that you know.”

On those Friday night visits, Madeline said, “he was always so positive as he had always been. He would say, ‘I love your hair or what a nice outfit.’ He was always so complimentary and said things to build us up. My mother was like that as well. She never said anything bad about anyone. She was always very positive.

One night we were talking about the plan of salvation and I made a comment and he said, “You are so profound. You’d better write that down.”

When Madeline would praise him, he’d quip, “It’s hard to be so great,” which was really just an expression of his humility. And he’d tease the grandchildren in the same way, if they were being a little bit arrogant.

She said that he was very humble, particularly about his calling. “I don’t know why I’m here, because I am the least of the apostles.”

Household of Joy and Laughter

Laughter marked the Wirthlin household, and their dinner conversations were bonding and fun. Sometimes they talked about the gospel and sometimes they would tell stories that often ended in laughter. He believed that humor was a great antidote for adversity.

He told this story in October’s General Conference: “ I remember when one of our daughters went on a blind date. She was all dressed up and waiting for her date to arrive when the doorbell rang. In walked a man who seemed a little old, but she tried to be polite. She introduced him to me and my wife and the other children; then she put on her coat and went out the door. We watched as she got into the car, but the car didn’t move. Eventually our daughter got out of the car and, red faced, ran back into the house. The man that she thought was her blind date had actually come to pick up another of our daughters who had agreed to be a babysitter for him and his wife.

“We all had a good laugh over that. In fact, we couldn’t stop laughing. Later, when our daughter’s real blind date showed up, I couldn’t come out to meet him because I was still in the kitchen laughing. Now, I realize that our daughter could have felt humiliated and embarrassed. But she laughed with us, and as a result, we still laugh about it today.”

She remembered his telling a funny story from his youth about a dog named Rough, who, used to follow them to the meat market. One day the dog followed a police car and the policeman turned around and shot him in the foot. After that the dog wouldn’t follow them to the market if they blew up a paper bag and popped it. The poor dog must have thought he was hearing the sound of a gunshot all over again.

Madeline got to go with her father to the BYU/Utah football game last week. She said he was a fan of both schools, but he had a special feeling for the Utes. “He just loved the games. While we were there, a lot of people came up to him and said, “I think we’re going to win because you’re here.”

A few years ago when Urban Meyer was first named as the head football coach at the University of Utah, Elder Wirthlin went to lunch with him to help him understand missionary work and why young Latter-day Saints would leave their sports involvement to go on missions.

From that point, a firm friendship developed between them and in 2004 Coach Meyer invited Elder Wirthlin to come to speak to the team to kick off the season. Madeline laughed, “They had a perfect season that year, and my father became the team mascot. My parents went down to the bowl game with them.

Madeline said that football had been a great thing in her father’s life, though his father had had qualms about his playing because he wanted him to work at their store all the time. Elder Wirthlin’s work ethic was really strong, even as a young man, but his mother stuck up for him and made sure that he got to play football.

Still there came a time when his father said, “If you’re going to go on a mission, you’ve got to go now.” It was right before World War II, and he was gone for three years from 1937 to 39, serving in Germany , Austria , and Switzerland just as Hitler was beginning to gain his iron grip on the nations.

“When he came back, he never went back to football,” she said. His father was soon called into the Presiding Bishopric and he began running the business, a wholesale meat market called Wirthlin’s, whose motto was “There is no substitute for quality.”

Her most tender memory of her father was when she was living in California expecting her eighth child and her parents were in Freiberg, Germany. It was an extremely trying time in her life and one night she was pleading in prayer, “Heavenly Father, are you really there?”

Madeline said her parents laughed a lot together and had the perfect marriage. If they ever disagreed about something, she would counter, “I would think…” and he often would know that she was right.

On Elder Wirthlin’s 80 th birthday, Madeline’s mother, Elisa, wrote this tribute for him with a reference to Psalms 32:2.

“Blessed is the man in whose spirit there is no guile.

“As long as I’ve known your father, your brother, my husband, he has been without guile. I think that this is one of the reasons he has been blessed for 80 years with the Spirit, even the Comforter, which has given him the truth in all things. He has always been faithful and has devoted his entire life to the Lord. His ability of discernment is unsurpassed. When something bothers him or does not seem right, it is time for me to be alert and watch the events as they unfold.

“He has never coveted anything or been jealous of what other people have. He is always happy that they are successful or enjoying various opportunities. He has always been very diplomatic with people with their problems and as bishop he saved many marriages.

“As I was growing up, I prayed night and morning that I would find a righteous man to take me to the temple for time and eternity. Heavenly Father answered my prayers far beyond my expectations. It didn’t take me long to realize ‘THERE IS NO SUBSITUTE FOR QUALITY.’”

Now Elder and Sister Wirthlin are rejoined and they leave behind a glorious family and a legacy of love.