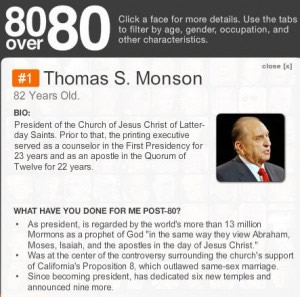 Slate magazine’s annual list of the nation’s most powerful people over 80 years old.

Slate reported, “The top spot this year goes to 82-year-old Thomas S. Monson, president of The Church of Jesus Christ of Latter-day Saints, and the only person on the list to rule over millions of people as a prophet of God.”

More updates on media can be found at www.ldsmediatalk.com