Church to Build Temporary Housing in Haiti Before Rainy Season

The Church of Jesus Christ of Latter-day Saints is launching an aggressive program to put as many as 600 urgently needed temporary housing kits into the hands of Haitian members before the rainy season starts in April. A single kit includes lumber, corrugated tin for the roof, and hurricane straps for the roof and cement. 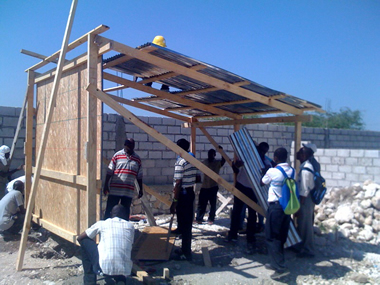 The goal is to get families back on their properties by clearing away the rubble through organized service projects. Once properties are cleared, tents or the new temporary shelters can be set up. It is a continuing effort by the Church to restore normalcy and self-reliance.

“The principle of welfare should take place, where we help the people help themselves,” said Berthony Theodore, a senior Haitian Church leader.

Church Welfare managers have assisted local Church leaders in establishing a well stocked storehouse of life-sustainable supplies such as beans, rice and milk. 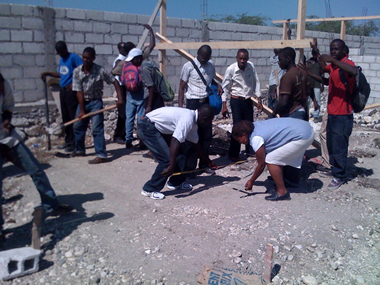 Orders are filled through local congregational leaders. Deliveries are then made to the nine meetinghouses which have been used as shelters for those displaced by the quake.

Latter-day Saint Churches in Haiti:  Havens of Safety and Calm

Hundreds of families continue to seek shelter at the nine meetinghouses around Port-au-prince three weeks after the temblor. The meetinghouses have become known as places of calm and security to those staying there. 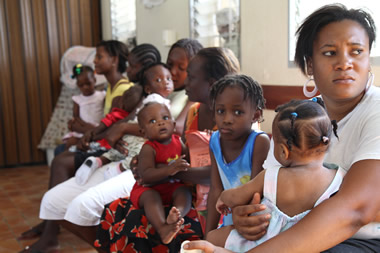 The Church has provided nearly 1500 tents to those left homeless and many now dot the property around the chapels.  “A neighbor told me about this place and invited me to come,” said 16-year-old Cazy Lenlingy. “I am very happy to be here. Everyone has been kind and has received me well, thanks to God.” 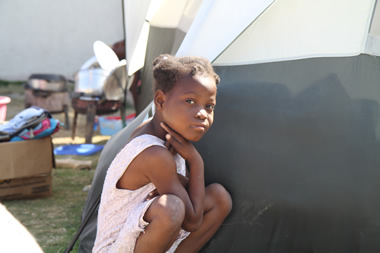 Over 7,000 people originally took refuge at the Churches with those not of the Mormon faith making up more than two thirds of the homeless.

The Church has sponsored several member teams of doctors to administer to the medical needs of the many people injured in the quake.
“I couldn’t sit back on my couch and watch it if there was something I could do,” said Dr. John Matheson of Kennewick, Washington in a voice choked with emotion.

Volunteer doctors from the States served side-by-side with Haitian physician Dr. Gislaine St. Louis who is a pediatrician and member of the Church.

“After the earthquake I closed my private clinic to devote my time to helping the children in these areas,” said Dr. St. Louis, “I love the children and want them to do better.”

When Dr. St. Louis and her fellow doctors visited the various meeting houses, word of mouth quickly spread throughout the community and dozens of patients began to trickle in for help. The doctors were making sure wounds treated immediately after the quake were healing properly and free from infection.

“What has touched me the most is seeing people congregate to the Church and seeing how quickly the Church organized after the initial disaster and responded,” Dr. St. Louis said.

Even with the chaos there often springs hope.  Three doctors say the same day they arrived in Haiti they faced their first medical emergency.

“I noticed a woman breathing heavily and pushing. She was going into labor!” said Dr. Rodney Anderson of Vernal, Utah.  Dr. Anderson knows all about labor. He has delivered more than 4,000 babies throughout his career. “I was hoping to deliver a baby while I was here. I just didn’t think it would happen so soon,” he said.

Doctors Matheson, Anderson and Craig Coleby of Houston, Texas placed the expectant mother on a ping-pong table and delivered a tiny but healthy baby boy.

The new mother, Noiselia Saintdor, said she and her five children were panicked after the earthquake destroyed their home.  They were running down the street with nowhere to turn for safety.

“We are not members of this church but I prayed to God to know where to go,” said Noiselia. She saw others going to the meeting house and followed.

“When I arrived I was really happy because of the security that I feel here,” recalled Noiselia.  “I am grateful for the people that have received us here and for everyone who is doing this great work.”

Response teams on the ground in Port-au-Prince are continuing to assess the situation and coordinate with other Non Government Organizations and relief agencies. While details are still being worked out, future activities will likely include assisting in agricultural, water and mobility projects, providing employment assistance, providing continued support to temporary settlements and continued work with other relief agencies.