Did Nephi Leave Anything Behind at Bountiful? | Meridian Magazine 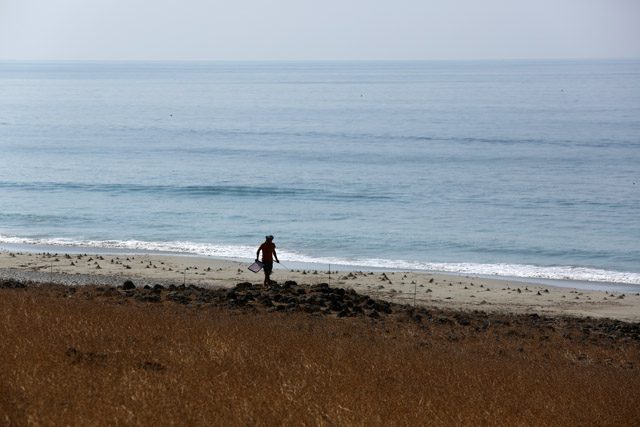 Did Nephi Leave Anything Behind at Bountiful?

All the articles on exploring Nephi’s Bountiful are available at this link.

Did Nephi and his family leave anything behind at their Bountiful where they built the ship, and if so, what? What traces of their party could still be found? If they did leave something behind is there any possibility that it could still be there, buried beneath centuries of time and occupations which have been in this place since?

Those are intriguing questions, and when you are in Khor Kharfot, the best candidate for Nephi’s Bountiful (and really the only place along this Arabian seashore directly east of Nahom that fits) you can’t help but wonder.

As we have taken archaeologists, a geologist and now, this 20th of October, a team of botanists into this isolated beach on the border of Oman and Yemen in South Arabia, we have not gone with the express idea of finding evidence of Nephi’s family, but rather to do scholarly work to preserve the archaeological remains there before they are lost in this rather delicate environment that is under new assault.

It is clear that there have been multiple occupations here in the past, in this now unoccupied spot where only the endangered Arabian leopards wander, so what chance would there be to stumble upon anything that a group of Israelites left behind who only occupied the spot for three or four years and moved on—especially when their main task was to build a ship, not to establish structures?

And yet, the imagination is piqued because we know some fascinating things about this family from their own record. They have a sense that they are re-enacting the archetypal wilderness journey taken by Moses and the Children of Israel. Their specific journey runs into a more general sweep of the Lord’s efforts to remove the righteous when a wicked city or land is about to be destroyed. They remind themselves “let us be strong like unto Moses’ (1 Nephi 4:2) They are aware that they are the posterity of Joseph of Egypt whose “branches run over the wall” (Genesis 49:22).

Their sense of themselves is epic. They know that their history is important and must be recorded. They see themselves as playing a key role in God’s unrolling of history. They know they are a covenant people with a mission. They feel cut off from main body of the covenant people, and this sense continues in the new Promised Land. Jacob describes his people in these poignant terms: “Our lives passed away like as it were unto us a dream, we being a lonesome and a solemn people, wanderers, cast out from Jerusalem” (Jacob 7:26). They love Isaiah and quote him extensively in their record, in part, because he speaks of the destiny of the Covenant People. They know, “For can a woman forget her sucking child, that she should not have compassion on the son of her womb? Yea, they may forget, yet will I not forget thee, O house of Israel” (1 Nephi 21:15). Perhaps this suggests to them that they will not be forgotten—and even more that they have an important role to play.

If you were this people, Lehi’s family, with such a sense of your destiny would you leave something behind? Maybe. We asked Dr. Richard Hauck, an archaeologist on the site what Nephi and his family could have left behind.

The idea of leaving behind a ceremonial center is fascinating, because in theory, this could be the remains of a different kind of structure than others that we see at Bountiful. This place for sacrifice and worship may have quite different features than a Muslim mosque or any other southern Arabian worship center of earlier date. Their ceremonial center would have reminiscences of other places important for worship that Nephi left behind in Jerusalem.

So while at Khor Kharfot, we think deeply about Nephi and his family, what we wonder most about is their departure from this place in a ship they made themselves. We sit on the shore and look out at the vast, unlimited sea before us, their Irreantum, and suddenly an event recorded in the Book of Mormon that we have always known becomes so much more tangible. We can feel it and understand it as if our senses were enhanced, as if we can taste the salt on the sea, feel the heat that beat upon them while they worked to construct a ship they would trust their families in. We say, to ourselves, if you had no experience as a shipbuilder, would you construct your own boat, load it with everyone you love, and launch from here on a journey you can’t imagine to a destination you’ve never seen for a length of time that hasn’t been given you?

We sit together and know that regardless of anything else that might be in this spot, one thing is certain that they left behind–a legacy of faith and superfaith for all of us. “I know in whom I have trusted,” said Nephi, and looking out at the sea at Bountiful, it is clear he surely did, or he would have never left.

You can help in the process of discovery at Nephi’s Bountiful by contributing here.