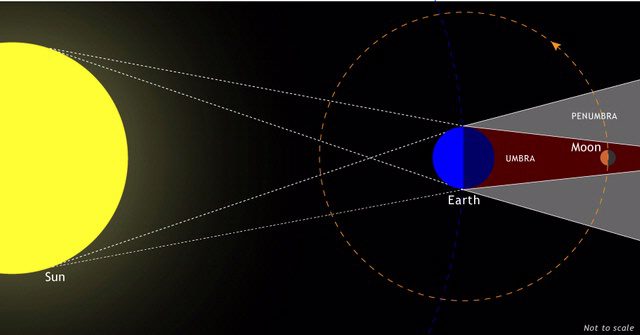 A widely visible total lunar eclipse will occur on October 8, 2014. This is the second of a tetrad of four total eclipses of the moon in a row, which is a fairly rare event. These four eclipses have been promoted by some Christians as a very significant latter-day sign relating to the state of Israel and the coming arrival of the Lord Jesus Christ at His Second Coming.

Six months ago as the first eclipse of the tetrad occurred that aligned with the Passover holy day, I wrote an article entitled “Are the Four Blood Moons a Significant Last-days Sign?”. Although the individual eclipses might have some significance, I concluded that the alignments and visibility of the 2014-2015 eclipses have enough inconsistencies that together they are probably not a key sign of imminent last-days catastrophic events.[1]

This coming eclipse is an example of some of these anomalies. It has been promoted as occurring on the feast of tabernacles holy day on the Hebrew calendar. In fact, it misses that key feast by one day and will not even be visible at Jerusalem.[2]

A Tilt of Orbits Determines Eclipses

Because the moon’s orbit is tilted five degrees from the plane of the orbit of the earth around the Sun, the intersecting line between the two orbital planes are where a solar or lunar eclipse can occur. Solar eclipses reveal the moon’s shadow blocking the Sun for a few minutes and in very limited geographic locations on the earth. In a lunar eclipse, the earth’s shadow passes over the moon lasting several hours and is visible over about half of the earth’s surface.[3]

This NASA diagram of the visibility of the eclipse on October 8, 2014 shows the total eclipse visible in most of the United States and the Far East. At least part of the eclipse is visible in South America and other areas in light grey, and the eclipse is not visible at all in Europe, Africa and the Middle East.

The maximum of this total lunar eclipse will occur in the mountain west of the United States on October 8, 2014 in the predawn sky at 4:55 a.m. quite high in the western sky.[4]

During the timeframe of 2001-2100, 228 lunar eclipses will occur, 85 of them total eclipses. Eight sets of four total eclipses in a row over a two-year period, a tetrad, will occur during this century.[5]

The Doctrine and Covenants declares:

“And it shall be a great day at the time of my coming, for all nations shall tremble. But before that great day shall come, the sun shall be darkened, and the moon be turned into blood; and the stars shall refuse their shining, and some shall fall, and great destructions await the wicked.” (D&C 34:8-9)

As we examine these prophesies, it becomes apparent that mechanisms other than eclipses might also be a cause of these signs and wonders. A good pattern to look at is the momentous signs of the Lord’s birth and death in the Americas, which were prophesied by Samuel the Lamanite.

In a very unusual prophesy, Samuel the Lamanite told of signs of the Lord’s birth and death and also gave definite timeframes when they were to occur.

Nephi, the grandson of Helaman, recorded the fulfillment of this prophesy.

“Lift up your head and be of good cheer; for behold, the time is at hand, and on this night shall the sign be given, and on the morrow come I into the world, to show unto the world that I will fulfil all that which I have caused to be spoken by the mouth of my holy prophets. … And it came to pass that the words which came unto Nephi were fulfilled, according as they had been spoken; for behold, at the going down of the sun there was no darkness; and the people began to be astonished because there was no darkness when the night came.” (3 Nephi 1:13, 15)

Samuel also prophesied of the signs of the Lord’s death.

Yea, at the time that he shall yield up the ghost there shall be thunderings and lightnings for the space of many hours, and the earth shall shake and tremble;” (Helaman 14:20-21)

And again, the fulfillment of this prophecy was also recorded.

“And it came to pass that when the thunderings, and the lightnings, and the storm, and the tempest, and the quakings of the earth did cease—for behold, they did last for about the space of three hours; and it was said by some that the time was greater; nevertheless, all these great and terrible things were done in about the space of three hours—and then behold, there was darkness upon the face of the land.” (3 Nephi 8:19)

Matthew noted that during the crucifixion of the Savior in Jerusalem that “from the sixth hour there was darkness over all the land unto the ninth hour.” (Matthew 27:45)

When Jesus Christ appeared at the Bountiful temple in ancient America, the destruction that occurred at His death was very apparent. There was great destruction and damage even in this city that was spared most of the terrible devastation of the three hours of earthquakes from the. “great storm, such an one as never had been known in all the land.” (3 Nephi 8:5)[6]


A total solar eclipse can last for as long as six minutes and during that short time the stars and their constellations are visible.  But this three hour long sign at the crucifixion of Christ goes way beyond that. At any rate, the full moon of Passover would preclude a solar eclipse which occurs at new moon. Calculations and traditions also show that a lunar eclipse did occur at sunset on the day of the crucifixion on April 1, 33 AD at Jerusalem. But a lunar eclipse cannot cause the sun to be darkened.[7]

John Pratt notes in his 1994 Ensign article on the Passover that an important secular reference supports the Biblical history and the magnitude of the devastation during the three hours of earthquakes and darkness.

“Another witness comes from Phlegon, a Greek secular historian from Caria (in Asia Minor), writing soon after A.D. 137, who ‘reported that in the fourth year of the 202d Olympiad there was ‘the greatest eclipse of the sun’ and that ‘it became night in the sixth hour of the day [i.e., noon] so that the stars even appeared in the heavens. There was a great earthquake in Bithynia, and many things were overturned in Nicaea.’”

“The year mentioned began on 1 July A.D. 32 and ended 30 June A.D. 33, a period which includes the time identified as that of the Savior’s crucifixion. The fact that Phlegon records both darkening of the sun at noon and earthquakes, just as Matthew describes (see Matt. 27:45, 51), in the that same year, makes it apparent that he is describing the same events that were also witnessed in distant cities in modern-day Turkey. This also confirms traditions that ‘the terror of the earthquake continued from the sixth hour of the preparation until the ninth hour’ (from noon to 3:00 p.m. on Friday; compare 3 Ne. 8:17-19), and that ‘when he was crucified darkness came over all the world,’ ‘the sun was altogether hidden,’ ‘the stars were seen,’ and ‘in all the world they lighted their lamps from the sixth hour until evening.’”[8]

Looking for the Signs of His Coming

In these exciting last days, scientific knowledge has been poured out upon the earth so that we can better understand the solar system and some of the predictable signs and wonders that will precede the Second Coming of the Lord Jesus Christ. Additionally, in our day we can also better appreciate the magnitude of other signs and wonders such as the three hours of darkness at the crucifixion that go beyond normal solar system events such as eclipses.

Hopefully, this description in the Doctrine and Covenants will describe us today as latter-day saints.

“And it shall come to pass that he that feareth me shall be looking forth for the great day of the Lord to come, even for the signs of the coming of the Son of Man.” (D&C 45:39)

“On April 15, 2014, a total lunar eclipse will occur on the same day as the Jewish Passover on the Hebrew Calendar. Three other lunar eclipses will also closely align during the next two years with the Passover and Tabernacles sacred feast days. Various publications such as Minister John Hagee’s book (“Four Blood Moons: Something is about to Change”) have trumpeted this rare set of four events as a significant sign of the fulfillment of latter-day prophesy. This article will analyze these coming events double checking the claimed alignments and examining the visibility of the eclipses in Jerusalem.”

“In a similar fashion, an analysis of the four blood moon predictions for 2014-2015 reveals that they do not satisfy reasonable requirements for a series of key last-days signs.”

Here is where the anomalies shown in this previous article combine together to diminish the indications that this tetrad could be a very significant sign. Three of the four eclipses are not visible at Jerusalem. One of the eclipses is not aligned with the feast of tabernacles holy day but falls on the day before the holy day, 14 Tishri instead of 15 Tishri. These facts certainly ought to be considered before this tetrad can be declared to be a key last-days sign related to the state of Israel and to the coming of the Lord.

John Pratt’s latest article on the Mars Calendar shows the magnitude of the Lord’s design of the solar system and the orbits of the planets to correspond with the key historical events of the earth. Exact, quarter-day accurate holy day alignments, shown in amazing detail in Table 2. To me, this underlines the importance of very exacting requirements that I have tried to use to evaluate whether this tetrad of lunar eclipses is indeed a very significant sign of last-days events.

“Lunar eclipses occur in pairs with solar eclipses, two weeks apart. This is because the Earth, sun and moon must be aligned for an eclipse to occur, and the alignment can only happen twice during the moon’s month-long orbit.

A lunar eclipse lasts for hours as the moon slowly orbits through the Earth’s shadow.

If the moon passes through the edge of Earth’s shadow, it’s called a partial eclipse. Passage through the dense center of the shadow is a total lunar eclipse.”

An excellent video presentation is also on this page.

“In 1302 B.C., Chinese historians documented an epic total eclipse that blocked out the sun for six minutes and 25 seconds.”

“Fotheringham pointed out that there was a partial lunar eclipse on Friday, 14 Nisan, 1 April A.D. 33, but he did not consider it a decisive factor. He calculated that this lunar eclipse would have been visible in Jerusalem at moonrise for nineteen minutes and suggested that perhaps it gave rise to the reports of the sun darkening at the Crucifixion (on the assumption that it was confused with a solar eclipse).”

“However, this eclipse has recently taken on new significance with the observation by Humphreys and Waddington[28] that Peter’s reference to the sun darkening and moon turning to blood (Acts 2:20) probably refers to the events of the Crucifixion. They cite contemporary reports of lunar eclipses described in such terms as “the moon turned to blood,” and as supporting evidence they note that the uncanonized “Report of Pilate” claims that at the Crucifixion “the moon appeared like blood.”[31] These researchers then refined the calculations for the lunar eclipse of 1 April A.D. 33 and determined that it should have been visible in Jerusalem for thirty minutes. They note that it might well have been widely observed, because Jews on 14 Nisan would have been looking for the rising of the full moon of Passover. Figure 2 is based on their illustration of the eclipse.”