LDS Fiction: TEMPORARY BRIDESMAID, A Look at Romance After Thirty 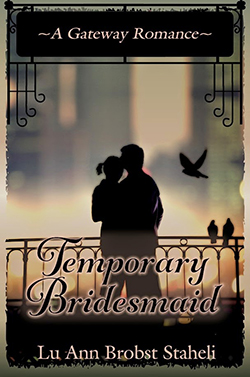 LuAnn Brobst Staheli doesn’t usually write in the Romance genre, but she’s a talented writer and gave it a try. The result is Temporary Bridesmaid, a fun look at romance after thirty.

Jenny receives a wedding invitation from one of her closest friends and realizes she’ll soon be the only single left in her circle of friends. She’s getting closer to forty than she cares to admit and there are no prospects in sight. Perhaps it’s time to stop dreaming of marriage and raising a family. Instead she should concentrate on her career.

On the day she decides her chances of marrying are slim to none, a handsome temporary worker shows up at her office. He’s not your usual temp, just starting out, but an innovative computer expert who just sold his multi-million dollar computer business to obey a strong impression that he should do so and go to Salt Lake. He doesn’t advertise his background to anyone in his temporary job, though a few people figure out he’s a well-known figure in the computer world. Of course he and Jenny get off to a bad start and Jenny accuses James of stealing her wallet. As they struggle to both work together and avoid each other, she is overwhelmed with efforts to advance her career, earn more money, take care of her mother, and serve as her best friend’s maid of honor.

A secondary story of one of Jenny’s friends runs parallel with the main story, telling the story of a woman who married too quickly to avoid the stigma of approaching middle age and still single. She discovers she doesn’t know her husband very well. She hadn’t expected marriage would cut her off from her mother and friends. Her husband won’t even allow her to have access to a telephone. As he becomes increasingly abusive, she discovers she’s pregnant.

Jenny is strong and capable, but she’s also impulsive and judgmental. Under stress she’s rude. Still it’s easy to sympathize with her as all of her friends marry, leaving her to face a future no one wants to share with her. Her pride takes a blow, but worse, the future she’d spent a lifetime dreaming of seems to be moving completely out of reach. James is fine with being single. Only his mother sees his single state as a problem. He likes Jenny, but suffers embarrassment and wounded pride at her hands. Staheli does an excellent job of making her secondary characters distinctive individuals. All of the major characters and the more important minor characters show growth and a greater awareness of their lives, expectations, and values as the story progresses.

There are not a lot of surprises in this story. It isn’t as much plot oriented as character driven and I’m not sure how many approaching-forty-brides actually go in for all the frills and cutesiness that younger brides dote on, but the story is fun while giving the reader glimpses of the problems and concerns faced by older single women who desire marriage and children.

Lu Ann Brobst Staheli got her start as a celebrity paparazzi reporter. She went on to an award-winning career as a ghostwriter for celebrity memoirs. She also taught junior high English, then became a school librarian. Some of her more well known books include Men of Destiny: Abraham Lincoln and the Prophet Joseph Smith and When Hearts Conjoin: The True Story of Utah’s Conjoined Twins. She and her husband live in Utah and are the parents of five sons.