LDS Conference Talks May be Given in Native Languages | Meridian Magazine

LDS Conference Talks May be Given in Native Languages 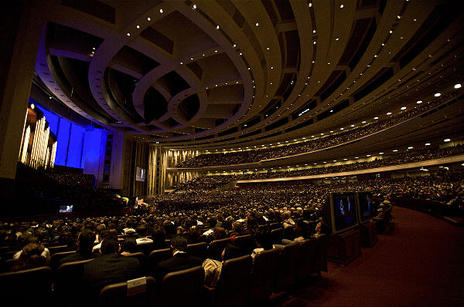 The following is an excerpt from the Deseret News:

The internationalization of the LDS Church continued Monday with news that will change the sound of its semi-annual general conferences.

“Speakers at the general conference of The Church of Jesus Christ of Latter-day Saints whose primary language is not English now have the choice to deliver their talks in their native tongue,” church spokesman Dale Jones said in a statement.

“In those cases, English subtitles will be shown on screens in the Conference Center and a live English interpretation will be provided for all other English-language broadcasts including satellite, cable, television, and the Internet.”

“I’d rather hear them speak in Portuguese,” Roberta Loftus, who moved to the United States from Rio in 2000, said of Brazilian church authorities who speak in conference. “The talks flow more naturally that way and the emotion comes across better.”

Loftus, who lives in Provo, Utah, said another positive is that the new policy opens doors for potential church leaders gifted in spiritual matters but not in languages, since it can be difficult and intimidating to speak a second language in a public setting.

I'm sure his talks will be even more powerful given in his native tongue!

Seriously. Dieter is such a powerful speaker! He's like the Mormon Jack Bauer