The Turning: How Large Institutions can Support the Most Important Institution | Meridian Magazine

The Turning: How Large Institutions can Support the Most Important Institution

This week, Meridian is running a series of 5 excerpts from the new book THE TURNING, by Richard and Linda Eyre. The Eyres are New York Times #1 Bestselling Authors and frequent contributors to Meridian. Their landmark new book THE TURNING: Why the State of the Family Matters and what the World can do about it is being published this week. Go to www.The-Turning.com for further information, samples, and a link to order the book at a discount. On the strength of its pre orders, the book has already reached #2 on Amazon in the category of Marriage and family. You can also join “Team Turning”  to become a part of a new pro-family movement. Today, we present excerpt FIVE from the book. 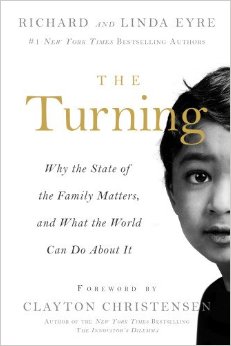 It is obvious that media has enormous influence over how we perceive our- selves and our world-and over how we live within that world. Those who say otherwise are trying to defend the indefensible.

We were featured guest speakers at an Aspen, Colorado, retreat with top Disney corporate officers and division heads. We wrote a brief “parents’ plea” for the occasion, attempting to articulate the appeal we felt all parents would want to extend to the Disney organization in light of some of their recent moves away from the family entertainment that made them famous. We called it “Err to the Light”:

To the Disney Organization: Err to the Light.

We appeal to you now, today, as parents, as “everyparent,” from a part of the heart that only parents know. We have been with you in these convention sessions, looked around, and tried to calculate the influence in this room. You reach every American family and every American child and beyond, to the whole world, not periodically, but daily.

Because of your size and who you are, because of media’s stretch and subtle stimulus, you may have more influence than any other company, even more, perhaps, than any other single institution of any kind, perhaps more than the Presidency, more than the Congress. Actually, “influence” is too small a word. You have stewardship. You reach our children every day. They may listen to you longer and with more concentration than to us.

What we say to you now is born not of statistical analysis or profit-margin expertise (although we promise you that “goodness sells”). It comes from a simple clarity bestowed only on parents. Because, you see, while our own personal commitments and values, our desires and dreams, may quiver with ambiguity, they take on a firm, sharp focus in what we want for our children.

As mere people, we are confused by complexity when we look at our world. But as parents, we are touched by simple, pure wisdom when we look at our child. In that wisdom, we see the joy of right decisions, the wonder and trust of selfless love, and the nobility of simple courage. We see the good and love in the world reflected in our children’s eyes. We feel the deep desire to pour all that is good into their lives. And we feel the need for help because we also see the damning dangers of the dark dimming of sensitivity, the callous desensitizing and loss of wonder that not only robs them of their childhood but steals their awe and hope.

Media, goes the old poppycock, doesn’t influence a society’s values, it only reflects them. Is that why prime time ads cost a million a minute-to reflect? Media influences us and our children so profoundly it cannot be measured. “With influence comes responsibility” goes the old clich. A stewardship? A burden to bear? But isn’t it more an opportunity, an opportunity to lift, to love, to help us all live in a higher realm?

As parents, our plea to you is so basic: Help us.

If you err, err toward the light. Be willing to earn 15 percent instead of 20 percent by avoiding the dark. Light brings strength, and a sure-footed, clear-headed creativity and confidence that makes up (financially and otherwise) much more than the missing 5 percent. Err to the light, not only in turning down a bribe or a sweatshop or a tax dodge. . . . Err to the light in turning down an amoral script, or a superfluous excess of foul language or violence, or a tarnishing comedy that makes fun of what is right. Err to the light in telling stories about the noble human spirit rather than the pseudo-sophisticated “realism” of the underside. Err to the light by believing and portraying that human beings are still good at their core.

Richard and Linda Eyre are New York Times No. 1 best-selling authors who lecture throughout the world on family-related topics. Visit them anytime at www.valuesparenting.com and preview their new book THE TURNING at www.The-Turning.com

Wife in the hospital after graduation to work for everyday care tasks are very heavy, pulse measurement is needed to watch, whenever you want to give the patient pulse should borrow someone else's watch, need to buy a watch. How many times and her shopping, she kept throughout the day in front of the clock counter, and the two men decided to concentrate resources to accomplish great things, with two people a month's salary, to buy her a piece of "Shanghai" watches, happy wife has in mind. Now this watch is also quite accurate, just a long time, is a bit old. Now life easier, and also has the ability to change better watch out, so in the weekend before the birthday of his wife, had in store for her to buy a piece of Switzerland "tonsure" automatic watches, watches and she bought me the same brand is "couple table". [url=https://sites.google.com/site/httpwwwcartiertech/]Cartier Jewelry Replica[/url] Cartier Jewelry Replica