What we Learned Creating Photographs for Jesus the Christ | Meridian Magazine

What we Learned Creating Photographs for Jesus the Christ

Photography is by Scot Facer Proctor

This week we’ve been in Israel, come to photograph scenes from the life of Christ, using actors who are Nazarenes. They have the lovely authenticity of having Middle-Eastern faces and for this project, we wanted faces from this region. We wanted the kind of faces that would have been smiling down at Jesus when he was born or looking up with rapt attention at him when He taught.

So often we try to capture the stories of Jesus with American faces, but for this project we wanted to try something unique and use actors from the Holy Land. Why so much effort? Because we think the project we are working on should be remarkable.

With Dr. D. Kelly Ogden, professor of ancient scripture at BYU, we are working on a centennial publication of James Talmage’s Jesus the Christ, which was first published in 1915. This project will use Elder Talmage’s content and notes, but will add additional notes and updates, and something more. It will be a visual feast, with more than 800 photos and scores of paintings as well as interactivity on many pages. Imagine being on a page of Jesus the Christ and being able to choose an accompanying photo essay, or link to a film, or hear a few words from a conference talk on the topic. Imagine being able to enlarge a photo for a closer look or see a slider with multiple photos of the same place from different angles.

This will be an electronic project only, available as an app (or ebook), because it will be so visually rich you could not publish a paper book big enough to hold it. We are hoping that the richness of the Savior’s life and teachings will leap off the page of a mobile device, and be a blessing for all of us, but especially to the rising generation who so often learn visually. We want to aid this rising generation in having a powerful testimony of our Savior.

We wondered how we could possibly find faces in a land so far from our home to portray the roles in the New Testament. What actors could we find? How would we audition them? How would we pay for them? It has been a matter of some thought and prayer for us, and we came to see the answer clearly. Nazareth has a place called The Nazareth Village that portrays what a village would look like at the time of Christ. Like Williamsburg or Nauvoo (but on a much smaller scale), they also have characters who play parts, dressed like first century people. Here we found a treasure trove.

They had people with the very faces we needed. The 28-year-old who would portray Jesus had a face full of light and kindness. Peter looked wise and bold, with a possibility of brashness. We were completely taken by Mary, a sister of Martha, because of the purity in her face. On and on it went, 25 actors who could not have pleased us more if we had a casting call that included all of Jerusalem and its environs.

What surprised us was as we set up each scene and instructed the actors what to do and how to move and when to gesture, we came to expanded understandings of stories we assumed we knew so well. Here, for example, is a series of photos illustrating the story of Mary coming to Elisabeth after she had first learned that she was expecting the Son of God.

We’ve all seen paintings of this scene with a welcoming Elisabeth throwing her hands up in greeting. What we saw so much more clearly setting this scene up to photograph was the distance in age between the two and what that meant in their relationship.

Mary may have been only about 14 when Gabriel came to her for the annunciation. She was young and vulnerable, and made more so by the precarious position she suddenly found herself in socially. Young, virtuous women of Nazareth did not suddenly find themselves expectant. Elisabeth was well past child-bearing age.

So we set up a shot with our Mary, who a 14-year-old Nazarene and Elisabeth, played by a 65-year-old, someone very motherly and nurturing with embraces for all. As we acted out the scene and clicked the camera, sometimes at two to three frames a second, these are some of the shots we got: 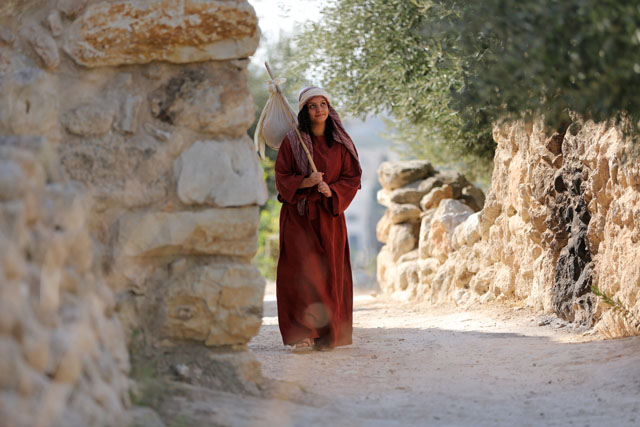 We are not certain how long it was for Mary to walk from Nazareth to meet her cousin Elisabeth in the Judean hill country. It might have been a few days walk. This was a bold and necessary thing for Mary to doto get away from Nazareth in her first trimester and to be with, and give comfort to and receive comfort from her cousin. 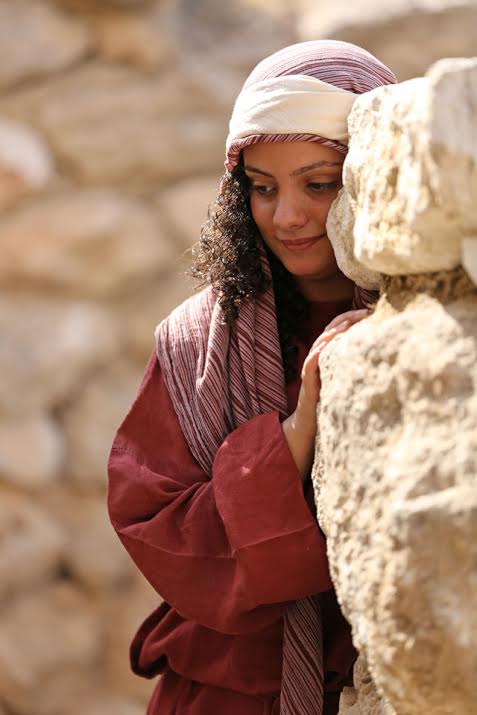 Using our little Nazarene model, Miriam (age 14), we wanted to capture her vulnerability and also her obedience to the angel Gabriel and to God’s will. We used the wall to serve as a symbol of hiding a bit and her expression as a symbol of revelation and keeping the things that she had seen, heard and experienced in her heart. 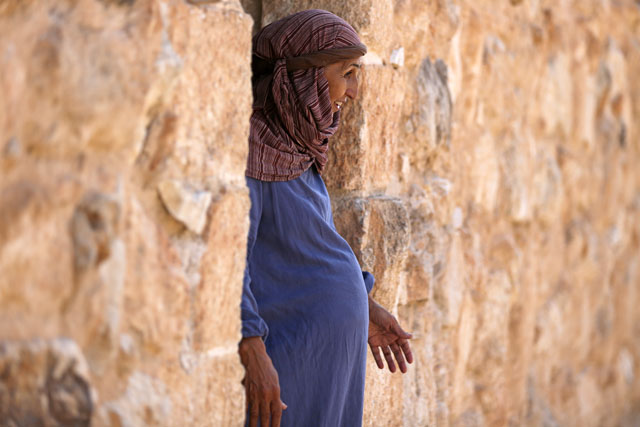 Hannah (who is playing the part of Elisabeth here) has been working at the Nazareth Village for 15 years. She has known Miriam (who played Mary) for most of her life. They truly are great friends already, just like family. This scene was not hard for either one of them to try to recreate. 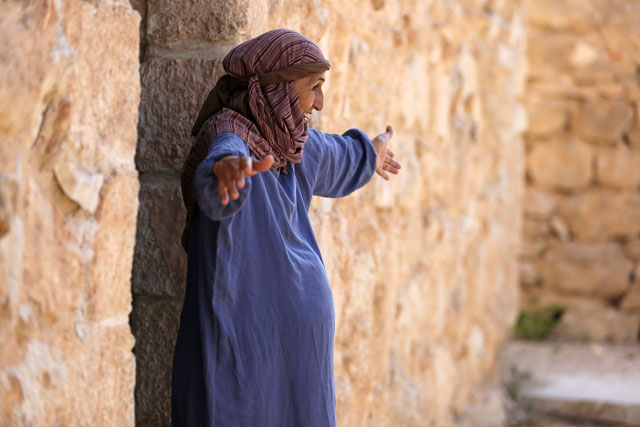 We didn’t have to give much direction to Hannah (Elisabeth) to greet Miriam (Mary) with love and joy. 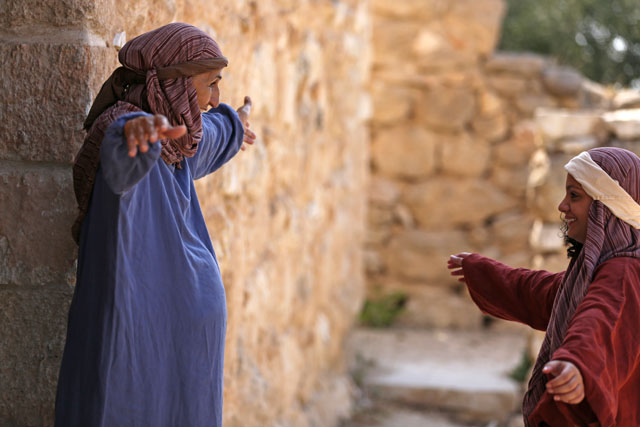 We could hardly contain our emotions as these two naturally threw their arms open to greet each other. It was so tender we were holding back our tears. There was no acting in their love for each other. 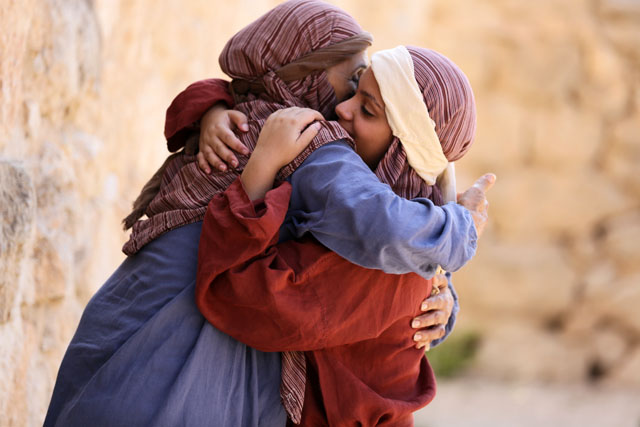 To see this 65-year-old woman greet this 14-year-old girl really made the true story come alive for us. 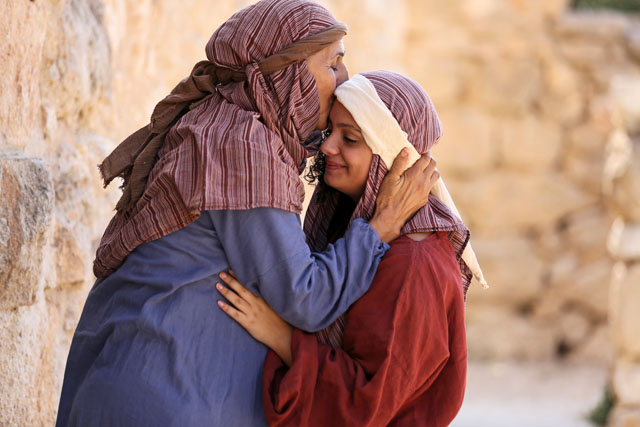 Our model Hannah (Elisabeth) kept placing kisses on Miriam’s (Mary’s) forehead. She was so thrilled to see her! 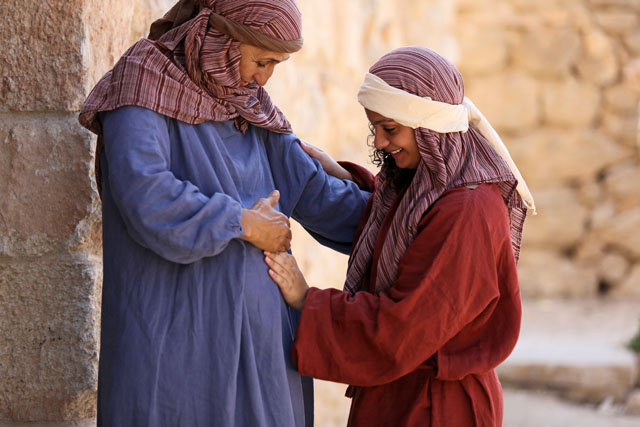 Neither of these actors needed to be told the details of the story of Elisabeth and Mary meeting each other and how the babe leaped in Elisabeth’s womb.

They both naturally placed their hands on Hannah’s tummy to feel the baby and rejoice in this heavenly meeting. 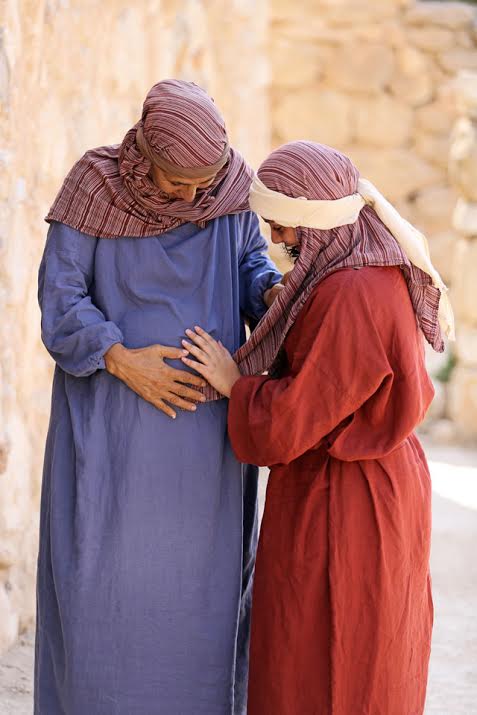 We shot five full sets of pictures for this scene, three vertical and two horizontal sets. We are not sure yet how the images will be placed in this part of Jesus the Christ, but we have to have plenty of cover. In the two mornings we were at Nazareth village we took just under 5,000 images. 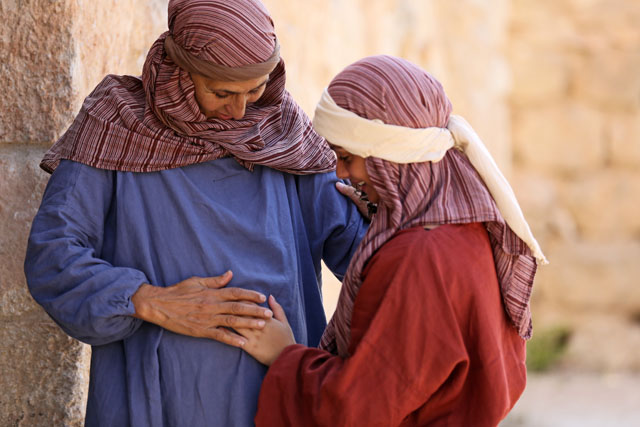 We thought it was fun how it turned out that both women had picked out the same color head covering for these scenes. It made us feel like they were from the same family. This particular image gives the feeling that Mary could feel the movement of John in the womb of Elisabeth. 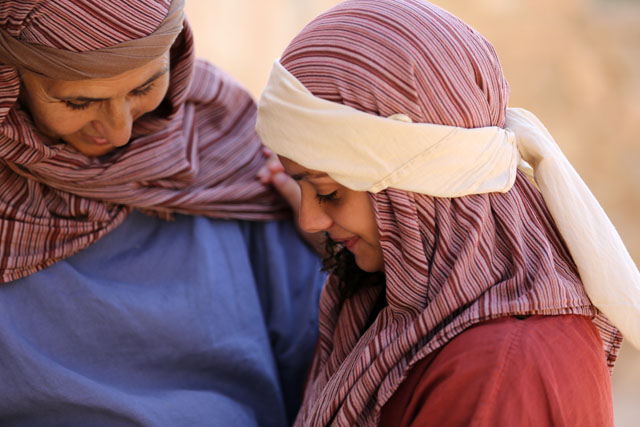 Mary’s response to Elisabeth in the scriptures is so non-typical for a young girl of that era. She had clearly been trained by her parents and teachers (including the angel Gabriel) as she was conversant in ancient Biblical language: “My soul doth magnify the Lord, and my spirit hath rejoiced in God my Saviour. For he hath regarded the low estate of his handmaiden: for, behold, from henceforth all generations shall call me blessed. For he that is mighty hath done to me great things; and holy is his name. And his mercy is on them that fear him from generation to generation.” (Luke 1: 46-50) This is amazing language coming from a young Jewish girl! 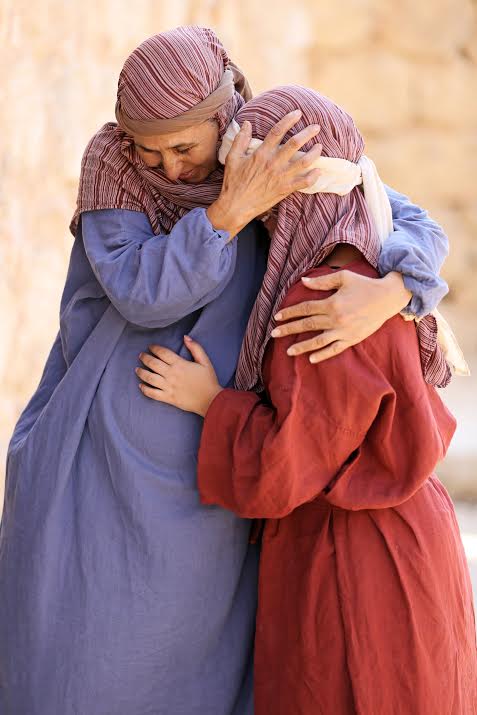 Hannah could not get enough of showing affection to young Miriam here in Nazareth Village. It was touching and taught us so much about the love that these two really did have for each other in ancient times. Elisabeth of old said to Mary: “Blessed art thou among women, and blessed is the fruit of they womb. And whence is this to me, that the mother of my Lord should come to me?” (Luke 1: 42-43) 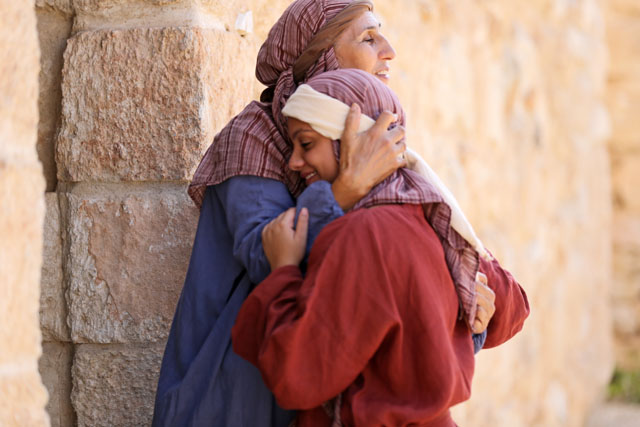 This truly was one of our favorite scenes to shoot in Nazareth. The feeling of family was so strong between these two that we humbly watched as they expressed that familial love and affection for each other in these tender scenes. 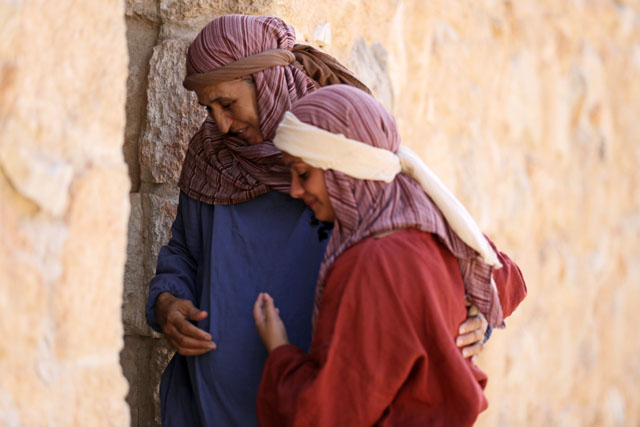 Mary stayed with Elisabeth for three months in those days, long enough for Elisabeth to deliver and for Mary to make it through the most difficult time, physically, of her pregnancy. This time together was a comfort to them both.

The moment I scrolled to the first picture the tears ran down my cheeks. Your were so right to approach illustrating the life of Christ with these pictures. . This will be treasure for years beyond number. Thank you

Moved me to tears