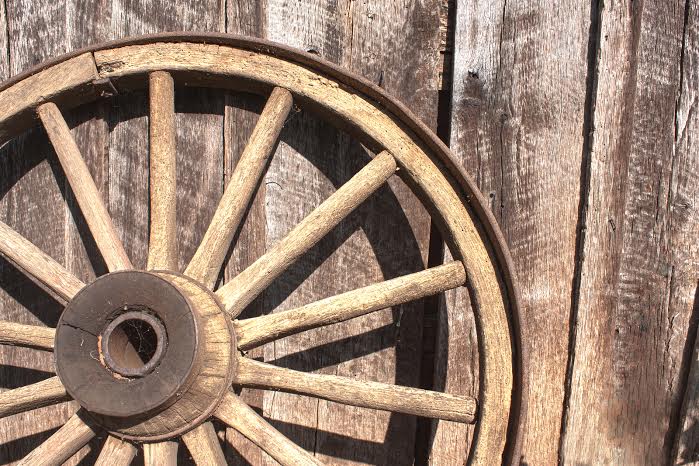 Those wheels west toward a distant mountain valley called Salt Lake and a dream called Zion were so much a part of the thinking of the early Saints that even the separation of family members, sending one at a time as the means could manage, was common. Just to set your foot there, for a son or brother to plant a crop and call it home, for a baby bearing your name to catch its first breath in the mountain air, this ensured your family’s inheritance in Zion.

It was a prize worth any sacrifice. “I can die quietly without any complaint,” thought the old and weak ones, “if my grandchildren and their children will grow up there.” Thus trail stories abound of children traveling only with an older sibling, of fathers sent ahead willing to do anything to find a way to bring a waiting wife and children, of teenagers left to come alone when orphaned by their parents’ deaths along the way. The trail sometimes made children old before their years.

B.H. Roberts-Stuck in a Molasses Barrel

B.H. Roberts, who would become president of the First Council of Seventy, was nine years old when he came to Salt Lake with only his sixteen-year-old sister, Polly, in 1866. Their father was in England, and their mother had come to the Salt Lake Valley four years earlier, counting the days until she could see them again. For him the trail was high adventure, an unsupervised lark, dimmed only because the shoes and heavy bedding his mother had sent with a teamster from Bountiful never made it to him, and he shivered through the nights with only his sister’s petticoat for a covering.

Still, what a boy can make of the trail, its wildness matching an untamed wildness inside him. He lingered behind to pick yellow currants along stream banks while the wagons rolled on without him; he watched Indians from a secret place, awed and trembling with “magnificent terror” at their “immobile and solemn” faces and with other boys he searched among the willows for swimming holes.

He later wrote, “On one occasion a night drive was necessary, and a young man was entrusted with the freight wagon team. The young teamster was unusually devoted to helping the young ladies, especially on this night, so I ran in behind the ox on the near side and climbed up on the seat that had been arranged in the front of the wagon by the regular teamsters. The seat consisted of a broad plank placed across the open head of a large barrel. The day had been hot and the hours of the journey long, and I was decidedly tired, nearly unto exhaustion. Fearing that my riding, which was ‘agin’ the law’ would be discovered, I slipped the broad board from the barrel head and conceived the idea of dropping down in the barrel, secure from the eyes of those who might oust me from my seat in the wagon if I were found.

To my surprise, if not amazement, I discovered when I let myself down in the barrel that my feet were into about three or four inches of a sticky liquid substance which turned out to be molasses. The smarting of my chapped feet almost made me scream with pain, but I stifled it. Too tired to attempt to climb out, I remained and gradually slipped down and went to sleep doubled up in the bottom of the barrel with such results as can well be imagined.

It was daylight when I woke up and there began to be the usual camp noises and teamsters shouting to each other to be prepared to receive the incoming team driven from the prairie by night herdsmen. As I crawled out of the uncomfortable position, and with molasses dripping from my trousers, I was greeted with yells and laughter by some of the teamsters and emigrants who caught sight of me. I crept away as fast as I could to scrape off the syrup, which added to the weight and thickness of shirt and trousers, for there was no change of clothing for me, and so bedaubed I had to pass on until dusk and drying somewhat obliterated the discomfort.”

Falling asleep at the wrong place had greater hazards for six-year-old Arthur Parker. He had crept into the shade to rest during a morning break on a sultry June day in 1896 and had been left behind. His parents, Robert and Ann Parker, had assumed he was playing along the way with other children and did not miss him until they stopped that afternoon to make camp in the face of a sudden thunderstorm. It was then they realized Arthur was not with them.

Who can imagine the rising panic these parents felt in the next two days as the company remained while the men searched for their son? Finally, on July 2, with no alternative, the company was ordered west. Robert Parker went back alone to continue searching for his missing child. As he was leaving, his wife pinned a red shawl around his shoulders and said words such as these: “If you find him dead, wrap him in the shawl to bury him. If you find him alive, use this as a flag to signal us.” Then with a sinking heart, she and their other children struggled on. Out on the trail each night Ann scanned the horizon for her husband, eyes straining for the sign. Day after frigthening day-nothing. Then, just at sundown on July 5, she saw a figure approaching from the east. In the last light of the setting sun she saw the glimmer of the bright, red shawl.

One of the diaries records, “Anne Parker fell in a pitiful heap upon the sand, and that night, for the first time in six nights, she slept.” On July 5, Archer Walters recorded, “Brother Parker came into camp with a little boy that had been lost. Great joy through the camp. The mother’s joy I cannot describe.” It seems the little boy, sick with illness and terror, had been found by a woodcarver who had cared for him until his father had found him.

George Staples-Taken in by the Indians

Fourteen-year-old George Staples was not found nearly so soon. He had been the only one of his family to leave England, sent ahead while his parents lingered to raise money for themselves and the rest of the children. They knew it would be a long time before they could join him and that the boy would have to fend for himself, but a chance to send one of their family was not to be missed.

He left in 1848 with a company of Saints and made it as far as the Sioux country, where, delirious and tormented by mountain fever, he could travel no farther. The company was perplexed about what to do for him. Endangered by warring Sioux, they dared not tarry, but it was clear the lurching of the wagon was unbearable to the boy, who seemed only hours from death. It was the kind of dilemma faced by many during the gathering-impossible to stop and just as impossible to leave him behind.

Finally, they determined that the kindest thing to do was leave him with a trapper with whom he could spend his last few hours in peace and comfort. The trapper agreed to care for him and then bury him, marking the spot with a permanent identification.

That afternoon a friendly band of Sioux greeted the trapper and noticed the sick boy. A squaw, looking at the tormented young man with tenderness, asked if she could take him. In the days that followed, she and the tribal doctor nursed him with Indian remedies, for the mountain fever that was so strange to the settlers was more common to them.

The delirious boy rose in and out of consciousness, but finally the searing pain in his head and the wild expression in his eyes settled down and he realized with some delight where he was. His loneliness and sickness were replaced by the mothering of a squaw and the attentions of a friendly people who seemed delighted to have him among them. They didn’t seem to understand when he told them he had to find the white people, they simply broke camp and moved on.

As the months passed and turned into years, George enjoyed his life among the Sioux. His Indian mother made him beautiful buckskin clothing, and when the braves were on the warpath, they left him behind with the women and children, telling him to take care of the camp. He thought less and less about any other life. Then one day a group of pioneers saw him with the Sioux and carried word to the Salt Lake Valley. Not long after, a group from the valley came looking for him.

Among them was a familiar and beloved face. With a wild whoop, he fell into his father’s arms. James Staples had received word in England that his son had died two years before, but when he brought the family to Salt Lake he heard the story about the spotting of the white boy among the Indians, and grasping at a straw, came looking for him. “Could this be my son? Please let this be my son.” It was a sweet reunion for an emotional father and son, but George’s Indian mother was devastated, weeping inconsolably at the loss of her adopted boy. James took him with the promise that he would be back to visit, and four years later the promise was kept. The Indian mother greeted George with all the emotion of a mother who had been deprived of a dear sight for too long.