Run for Your Life | Meridian Magazine

Run for Your Life 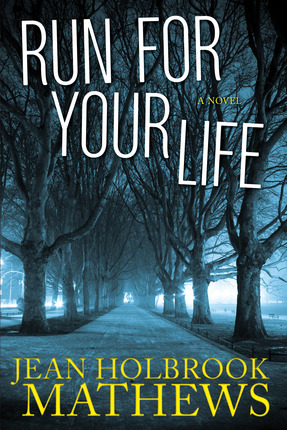 Run for Your Life by Jean Holbrook Mathews begins with brief glimpses of three people. Mattie Mathis serves as a senior staffer to her uncle Congressman Max Southland who is about to retire. She has arranged an elaborate party to announce his retirement and is anxiously awaiting a call from her fianc, another staff member. The call comes; he’s on his way, but is obviously worried about something and leaves her a cryptic message.

Theo Novak is a serious law student with a brilliant future ahead of him, who takes his assignment to write an original, well-researched brief seriously. His research leads him to write a paper that brings serious repercussions. Unfortunately his desire to please and excel motivates him to share details of his research with the wrong person. Wilbur Wilcoxin II is the head of a large prestigious law firm whose major objective is to ensure that one of the senior partners of the firm is appointed to the federal bench no matter what. Billions of dollars are at stake and he means to deliver whatever his international mega-wealthy client demands.

Mattie’s fiance, Craig, is murdered before he can tell her about the explosive student paper, but he does manage to mail a copy to her. Keeping that paper safe and getting it into the right hands becomes her major goal, along with staying alive. Jack Summers is a cop assigned to keep her safe and it doesn’t take long before she becomes more than an assignment to him. Each time they outwit an assassin, the stakes are raised. The political reach of those willing to kill to achieve their desired ends, leaves Mattie, Jack, and the few they dare trust, with limited resources to turn to for help.

This tale of conspiracy and intrigue involving an environmental lawsuit and the nomination of a new judge squared off against energy interests is waged both in Washington, D.C. and Arizona with more than a little involvement of foreign interests. The author has a solid understanding of the way Senate committees, politicians offices, and the judicial branch work. She also takes care to not link her characters to either major party. She creates strong main characters readers can cheer for. Congressman Max Southland is a little disappointing; he’s congenial and caring, but not someone who actually gets much done. Perhaps that’s realistic too. I liked that since both major characters had lost someone they loved, the hint of a possible future romance between the two is kept subtle.

Run for Your Life is one of those page turners that’s hard to put down. Only after finishing the book did I find myself questioning whether the villain is realistic or a bit too much like the caricatures that appear in extremists’ conspiracy theories. I also question the ethics of some of the CIA’s actions in the story. Nevertheless it’s a well-written and exciting story that makes clear the problems brought about by excesses by both extremist liberals and conservatives, but especially by those lacking ethics and motivated by greed.

Jean Holbrook Mathews is an Ogden, Utah, native though she has spent most of her adult life in Missouri where she was elected to the Missouri House of Representatives. After holding that office for ten years she was appointed to the Missouri State Medical Licensing Board. Her work took her to Washington ,D.C. frequently where she became well acquainted Senate committees and the inner-workings of the federal government. She now lives in Mesa, Arizona.

RUN FOR YOUR LIFE by Jean Holbrook Mathews, published by Covenant Communications, 288 pages, soft cover $17.99, also available on CD and for e-readers.