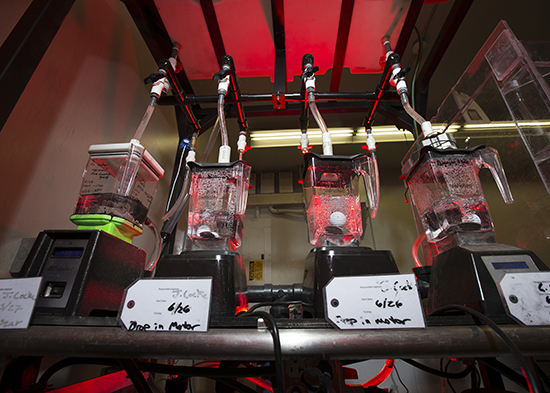 Blendtecs “Will it Blend?” series has fun demonstrating its blenders ability to destroy seemingly indestructible objects like iPads, Nike shoes and airsoft guns. But before they get in front of the camera, the real dirty work starts in a testing facility cleverly named the Torture Chamber.

The chamber is a small room where Blendtec relentlessly tests its blenders to their limits as well as its competitions blenders for longevity and motor life.

“We call it the Torture Chamber because we line up all of our blenders and brutally test them until they die,” said Reid Stout, a research and development engineer with Blendtec. “But weve outgrown the system we have, so we turned to BYU for help.” 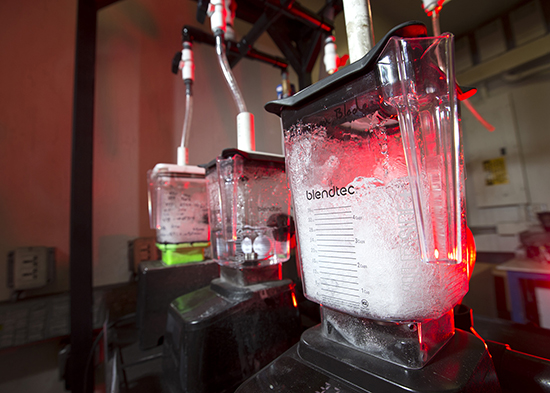 Mechanical torture chambers like this can get dirty, damp and unsafe. Running blenders to their limits causes carbon dust to accumulate, water to spill and outlets to spark. To make the torture chamber run more smoothly, an undergraduate BYU engineering team focused on improving the functionality, safety and cleanability of the facility, leading them to design a multi-level workstation.

The top level houses a water tank that uses gravity to feed water into the blenders. The purpose of having water in the blenders is to simulate how the blenders will actually be used by clients. The middle level houses a computer and eight blenders and the lowest level has a tank for water drainage and recirculation. The workstation is also on wheels so it can be easily transported and cleaned.

“The capstone team came up with some great ideas to reduce failure points in the test system and we have been running their test system since they delivered it to us,” Stout said. “We cannot remember a capstone project going as well as this one.”

One of the teams greatest personal accomplishments and favorite new feature of the workstation is their complete redesign of the lids.

Originally test preparation was a long, painful process that could take up to 30 minutes. The team would use silicone or even screws to secure the lids. Now, the lids can just snap on and off reducing test preparation time to almost five minutes.

“The table top is plastic so everything is completely washable and easy to maintain,” said Terri Bateman, the capstone teams faculty advisor. “All the electronic equipment is below the table top but easily accessible so the water will not spill onto any electrical components.”

The team received their first load of blenders from Blendtec in Fall 2013. Of course, they did what anyone else with a Blendtec would do: They started blending things like water.

“It just exploded with water,” said Kendall Thacker, BYU student and team leader. “It went all over the lab and that started the culture that we have. In our lab we were always known as the messy and the loud ones because we were either spilling water everywhere or we were making lots of noise by running blenders.”

The team says their messes and disasters were crucial steps to the development of the final product.

“We destroyed a lot of jars” Thacker said. “We would destroy jars by drilling holes and taping holes. It was fun to be destructive.”

The redesign of the Torture Chamber is the 12th Engineering Capstone project Blendetec has sponsored.

Blendtec is testing their setup and plans to produce two more eight-blender systems for use in the torture chamber.