Study: Addiction Starts with an Overcorrection in the Brain | Meridian Magazine

Study: Addiction Starts with an Overcorrection in the Brain

The National Institutes of Health has turned to neuroscientists at the nations most “Stone Cold Sober” university for help finding ways to treat drug and alcohol addiction.

Brigham Young University professor Scott Steffensen and his collaborators have published three new scientific papers that detail the brain mechanisms involved with addictive substances. And the NIH thinks Steffensens on the right track, as evidenced by a $2-million grant that will help fund projects in his BYU lab for the next five years.

“Addiction is a brain disease that could be treated like any other disease,” Steffensen said.  “I wouldnt be as motivated to do this research, or as passionate about the work, if I didnt think a cure was possible.” 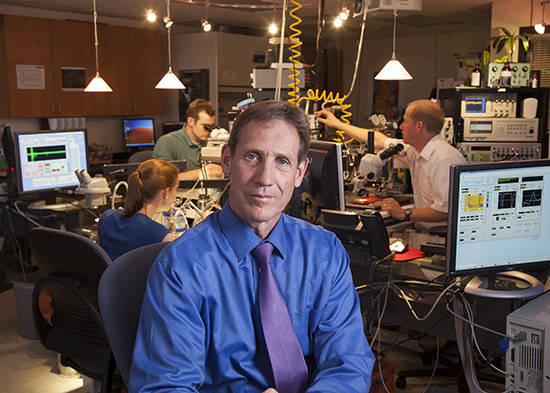 Steffensens research suggests that the process of a brain becoming addicted is similar to a driver overcorrecting a vehicle. When drugs and alcohol release unnaturally high levels of dopamine in the brains pleasure system, oxidative stress occurs in the brain.

Steffensen and his collaborators have found that the brain responds by generating a protein called BDNF (brain derived neurotrophic factor). This correction suppresses the brains normal production of dopamine long after someone comes down from a high. Not having enough dopamine is what causes the pains, distress and anxiety of withdrawal.

“The body attempts to compensate for unnatural levels of dopamine, but a pathological process occurs,” Steffensen said. “We think it all centers around a subset of neurons that ordinarily put the brakes on dopamine release.”

“It’s rewarding to see that your research efforts place another small piece in the enormous addiction puzzle,” said Mabey.

A separate study, co-authored by Steffensen and Ph.D. candidates Nathan Schilaty and David Hedges, explains how nicotine and alcohol interact in the brain.

“Addiction is a huge concern in our society and is very misunderstood,” Schilaty said. “Our research is helping us to formulate ideas on how we can better help these individuals through non-invasive and non-pharmacological means.”

In these three research papers, dopamine is the common thread.

“I am optimistic that in the near future medical science will be able to reverse the brain changes in dopamine transmission that occur with drug dependence and return an addict to a relatively normal state,” Steffensen said. “Then the addict will be in a better position to make rational decisions regarding their behavior and will be empowered to remain drug free.”