Engaged in so Great a Cause | Meridian Magazine

Engaged in so Great a Cause 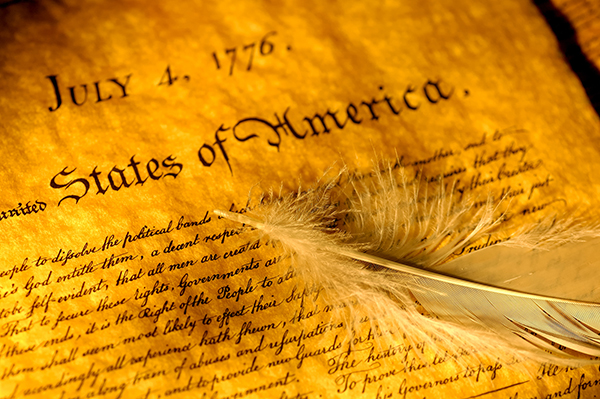 Sometimes when we look back at the events of history or even the stories of the scriptures, we work under the false assumption that the participants already knew from the beginning how things would turn out.

Somehow George Washington knew, though he had precious little military experience, that hed be able to lead an underfunded, underequipped, rag-tag Continental Army to victory over one of the most powerful militaries in the world at that time. Obviously when 33-year-old Thomas Jefferson was penning the words of the Declaration of Independence, he knew that wed be celebrating its significance and effect over 200 years later.

We neglect the fact that those farmers and merchants and tailors and blacksmiths that stepped up to be soldiers didnt know—when the winter chill was blowing through their threadbare clothing and their feet were bleeding in worn out shoes and their families were suffering back home waiting for the wages that rarely came—whether all this sacrifice would be worth anything.

New Years Eve of 1776, the enlistments for the entire army were up meaning January 1st of 1777 they could technically all turn around and go home though the task was far from finished. George Washington got in front of a large assembly of continental soldiers on his horse and urged them to reenlist. He said that if they signed on for another six months he would give them a bonus of ten dollars (about an extra months pay). But even in their financially desperate states, the drums began to roll and no one stepped forward.

They didnt know they were choosing to be a part of an effort that would be revered and remembered for generations to come. They didnt know ahead of time that this little clump of hostile and stubborn colonies would be united and grow to become one of the economic/military superpower of the world. They were cold and hungry and miserable and homesick.

Earlier in that year they had suffered a sound defeat at Brooklyn. In the hours and days that followed, Washington and 9,000 American troops wouldve been captured and the war mightve ended right there had it not been for this famous story of divine intervention.

The night of August 29, a storm came up from the northeast keeping the British fleet from coming up the East River. Unfortunately that same wind was keeping the Americans from retreating across the river into Manhattan. But then, suddenly the winds subsided and the crossing was clear. The Continental Army started ferrying men and canons and horses back and forth through the night until 19,000 of them crossed the river without losing a single man and without the British ever knowing about it.

David McCullough gave a speech at BYU in which he talked about this event. My favorite thing he said about it was that though this event was immediately cited as divine intervention, “it couldnt have happened only because of chance or the hand of God. It also required people of skill and experience with the nerve to try it.”

The Lord can arrange amazing circumstances in your life—he can stop the winds and give you perfectly still waters and you still have to have the strength and confidence in Him to load the boats and try the crossing.

Interesting to note to that it was those same troops that, despite witnessing a miracle, did not step forward a few months later when Washington asked who was willing to reenlist. It is an illustration of the way that our faith, our conversion, and our relationship with God are not a single event. Crossing the East River once isnt enough.

When the drums continued to roll that night and nobody volunteered, Washington turned to leave and then turned back and said:

“My brave fellows, you have done all I asked you to do, and more than could be reasonably expected, but your country is at stake, your wives, your houses, and all that you hold dear. You have worn yourselves out with fatigues and hardships, but we know not how to spare you. If you will consent to stay one month longer, you will render that service to the cause of liberty, and to your country, which you can probably never do under any other circumstance.”

Washingtons entreaty will likely remind you of Chief Captain Moroni and the words scrawled on a scrap of cloth that begged the people to remember what they were fighting for. The drums rolled again and General Washington silently waited. This time, the men began stepping forward. But its interesting to note that they needed to be prompted and persuaded. Engaged in so great a cause and they still needed to be reminded.

What greater cause is there then the Gospel of Jesus Christ? We too have crossed East Rivers in our lives—moments where we felt the Lord step in on our behalf, but its easy to begin to believe itd be easier not to reenlist. If we arent regularly reading the scriptures, attending our meetings and making the temple a priority in our lives, our view of eternity may be muddled by more seemingly urgent concerns. We may forget completely that the Lord cleared the waters so that we could continue on in a mighty work.

We need reminding and we need to put ourselves frequently into the path of the people that will remind us what were doing here and what were fighting for.

We sometimes revere the founding fathers, particularly George Washington as though they were perfect people, but David McCullough pointed out, “They were not perfect, they were imperfect—thats whats so miraculous”

We too are imperfect and we too are living in the present without knowing what the future holds for us or what history will write of us.

When we have career paths with uncertain outcomes or were still sort of waiting to meet the person were going to marry or we dont know if our child will ever come back to the Gospel and we dont know how itll all turn out–its easy to get discouraged and begin to flounder in all the uncertainty.

But the Lord knows exactly what victories are coming for you without thinking any less of you for getting scared because you have such limited human perspective. If you trust in him, he can bring you peace and comfort and bravery. He can teach you the ways that you need to prepare so that when the winds clear on the East River, youll be ready to cross it.