LDS Fiction: “Living it Down” 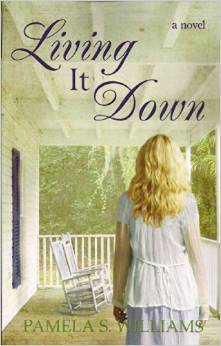 Living It Down by Pamela S. Williams is one of those books I have to give a mixed review. It’s very well written, but I don’t agree with some of the premise behind it.   It’s the story of a woman, Carrie Burke, who decides to take a “time out” from her marriage. After fighting a battle with depression and feeling lost and discouraged, she thinks the only way she can deal with her imperfections is to temporarily separate from her husband, get a job, and prove her own self worth. She moves into her elderly Aunt Sophie’s tiny, dingy basement apartment with her twelve and fifteen-year-old daughters, leaving her husband, Morgan, confused, angry, and completely in the dark about why she’s moving out.

She has several unresolved issues to deal with. First, there’s a relationship with a man she almost married twenty years ago that involved heavy petting that still fills her with guilt. Second, she’s never gotten over her feelings of inadequacy following the death of a son born too early with serious defects and the aftermath that left her unable to have more children. And third, she has a childish and unrealistic expectation of achieving personal perfection.

As might be expected her daughters aren’t happy with their cramped quarters and being away from their father. The older daughter gets a little too involved with a predatory creep and the younger daughter has trouble making new friends and fitting in at her new school.

Carrie spends her time sleeping and job hunting. She knows she needs spiritual help to deal with her problems and makes an appointment with her new bishop. When she shows up for her appointment with him, she is horrified to discover he is the old boyfriend who joined the Church after they broke up and has recently been called to be the bishop of the ward she is now living in.

She forms a close friendship with another woman she is assigned to help plan a regional Adult Singles party. Through this activity and their friendship they form a business partnership. Her bishop counsels with her on a regular basis and she begins to understand the atonement and her relationship with Christ and her husband better. Gradually she begins to include him more in matters concerning their daughters. They both renew lapsed temple recommends and search for the means to put their marriage back together.

There are a lot of good points made in this story concerning personal fulfillment, repentance, and the atonement. The author handles well the unrealistic expectation some people have of achieving perfection in this life. However I’m uncomfortable with having the bishop in this case counsel a woman with whom he had a prior relationship when their relationship is part of her problem. Though the stake president sits in on the first session, they are alone during the rest of their sessions. I also don’t think anything was gained by separation that couldn’t have been gained much more quickly and less painfully by spending more time together and having a few honest, open conversations.

The characters are interesting and they grow throughout the story. In the beginning Carrie seems childish with a tendency to over dramatize and in many ways she matures, but at the end she still plays childish games with her marriage. Morgan tends to overwork, and loses patience easily, but eventually decides his marriage and his faith are worth developing greater patience. The older daughter is much like her mother; social, makes friends easily, terribly naive, and has a tendency to over dramatize while the younger daughter is steadier like her father. Their and their teenage friends’ dialog doesn’t feel realistic and one scene where the older daughter tells off her predatory boyfriend seems pointless and accomplishes nothing. (I can’t imagine a kid like that sticking around to listen to her rant.)

Williams has a warm, comfortable style and women dealing with questions concerning adequacy and self esteem could benefit greatly from the truths she points out. She deals well with the quest each person has to find identity, joy, and fulfillment in life and hope for the future.

Pamela Stott Williams grew up in Portland, Oregon, graduated from Brigham Young University, and has traveled widely. She now lives in Utah. She has worked as a newspaper reporter, writing teacher, editor and has written essays, poetry, plays, and now a novel. She and her husband are the parents of three children and grandparents of seven.