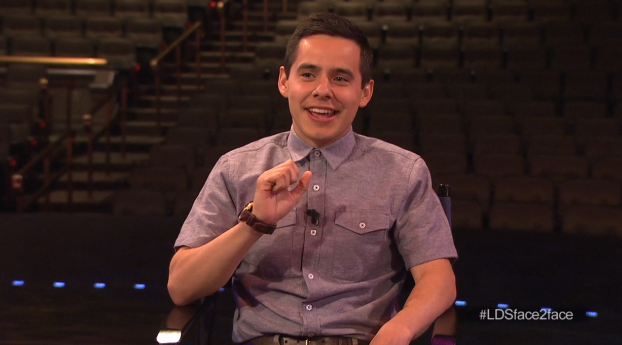 The youth of the Church joined in a first ever live face-to-face event with David Archuleta Tuesday on Facebook hosted by Young Women General President Bonnie L. Oscarson and Young Men General President David L. Beck. It is another innovative way that the Church has turned to technology to spread the gospel and strengthen the Saints-this time reaching out to the youth where they live-on Facebook.

David Archuleta was a great choice for this first interview because the former American Idol and nationally-known singer chose to put the dazzle of his career aside to serve a full-time mission in Chile for the Church and despite his fame, he is approachable and natural, candid and humble.

The two General Presidents hosted the event, taking turns asking questions that had come in from all over the world for Archuleta including everything from how he made his choice to go on a mission to whether he has a girlfriend and what he is looking for in a wife. Archuleta also sang several songs including “If the Savior Stood beside Me” and “Called to Serve”.

Archuleta said that a mission was always something he wanted to do. It was never now that he was doing his music “forget about a mission.” A lot of people started telling him, “You don’t have to go on a mission. You are doing a lot more good where you are now,” but, he said, “I was just never satisfied with the idea of not going on a mission. I needed that experience. I felt that there was someone there who was waiting for me. Now I know who those people are, their faces and their experiences-and watching them change. It was just amazing.”

He said a mission is so great because you don’t have the phone. You don’t have the Internet. He said, “I thought I would miss it, but I just felt free.” Instead everything is about “what I can do for someone” and teach them principles that can change their lives. He said he loves the quote, “The gospel of Jesus Christ helps bad people become good and good people become better.

We don’t go out and tell people that everyone is a sinner, but we tell that them that this gospel will help your life. He said that one family who he “absolutely loved” felt like something was missing. He loved teaching them and seeing the change happen. He told them Try living this commandment. Try following this principle. Come to Church and see what it does for you.”

He acknowledged that sometimes he was homesick and sometimes he wondered what his Mom and siblings were doing at home, but then he would remind himself, “Why did I leave all of that? I came here to serve the Lord..I came here because He knew that I needed it.”

What he loved about his mission was having his focus constantly on praying and keeping the commandments of God. He said he wants to have that feeling that comes with that all the time..

He was asked, “Did people recognize him on his mission? Did they know who he was?” They didn’t. He had doors slammed in his face like any other missionary, but often he used music as a door approach. Sometimes if people didn’t want to hear a gospel message, he sang to them and let music play its part to bring the Spirit.

“Half the time I would sing on my own, but often I would sing with my companion since we were both there dedicated to what we were doing.” While people might not have let in some religious people on their doorstep, once they felt the Spirit through the singing “they understood our purpose better”.

One questioner asked Archuleta how he could keep his life in harmony with God when he was surrounded by fame, wealth and popularity? Here he was confessional. “A lot of people,” he said “try to tell you what will make you happy. They say, This is what will make you feel good’ and sometimes you believe them. They say You aren’t going to be successful until everyone knows you.’ Sometimes you believe it, but when you go through it, you say, that was cool, but why do I not feel successful?”

He said that just after doing American Idol and having his first album come out people said this is what happiness is. “Are not you on cloud nine?” He said, “What’s wrong? It’s not working? Why don’t I feel good? I just started getting depressed.”

Then, he said, he remembered what always made him happy. It was his family and remembering who he was, that he was God’s son. If living a certain way makes you feel good, then he said he needed to do it again.

“During that time,” he said, “I didn’t consider myself inactive, but I wasn’t going to church [because of his schedule]. “I didn’t realize how it was affecting me,” he acknowledged.

Kendra, who plays the keyboard for him, and was the only member of his band who was LDS, made arrangements for them to go to church on Sunday. He realized that he had more of a say about what he did on Sunday then he thought. He learned that he did not have to be closed and confined until noon. He could go to church-and he did. “It made a huge difference in my life,” he said.

“People were telling me that I couldn’t go and I did. I realized I had more of a say than I thought I did. I had become afraid to tell people that I’m a Mormon.” He thought, “They are going to think that I am a weirdo,” but he learned that he could keep his priorities, and he wasn’t goint to change them for anybody.

One caller asked what he could have done to be better prepared for his mission. He said, “I would have studied Preach my Gospel more. He said you realize when you go on a mission, you don’t have the Bible and Book of Mormon memorized. You don’t have to. You do have to be willing to dedicate yourself and to learn. You have to be teachable. Preach my Gospel teaches you how to be teachable. You are going to be studying it every day on your mission, so you might as well start now.

“Something that has helped me so much is going to the temple.

I made it a goal to go to the temple every week and that has been a huge help to me.You are in the house of the Lord talking to him and you can hear Him so clearly there.”

A Lutheran teenager from Wisconsin asked, “What message of the gospel seems to be universal with everyone you’ve met?”

His answer brought him to tears. He said the biggest thing that everyone looks for is to feel loved. Everybody wants to feel like they have a reason that they are here. People, once they come to know God, or even just feel loved, they want to give it back. The more you feel loved, the more you want to love other people.

He said that he thought that being on a mission and being obedient would bring him automatically closer to God. He said, “Even doing all I could, it still wasn’t enough if I didn’t have the help of the Lord with me. That’s when I humbled myself and realized how much I needed him. Even doing all that I could, I was still going to be imperfect. I was still going to mess up a lot and I needed him.” He said that on his mission he came to learn what Christ’s atonement really was and how to apply repentance by being honest with himself, realizing what he was doing wrong so he could change, treat himself better, love himself better and love others better.

As for the girlfriend in his life, he has none. He said that much of his life he has been a little anti-social “and probably went on one date a year.” Now, the person he is looking for would love the Lord first.

This Facebook event for the youth was a great beginning, and we hope to see more of them.

For Dorothy above - welcome, new fan! I'm also an older fan and I've been impressed with both David's singing and his character since he was on American idol. If anyone is on twitter, David is DavidArchie there (and same name on Instagram). While David was on his mission, his manager tweeted, but now David is back posting his own tweets.

I am sure that David's spirit was felt by many of the Youth.