LDS Fiction: ‘The Insider’ Author Keeps Getting Better and Better 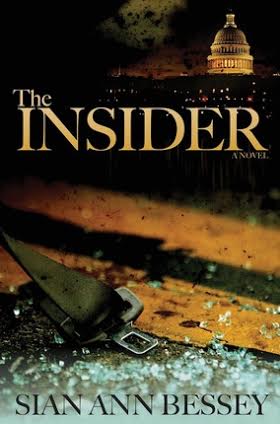 It’s exciting to see an author get better with each succeeding book. I’ve enjoyed Sian Ann Bessey’s books since her first one, but she is one of those authors who just keeps getting better.

Her newest novel, The Insider, is a gripping modern tale of a news reporter, Ben Cooper, who returns from a difficult assignment in Afghanistan to learn his twin brother, a prominent news anchor is dead, killed in a suspicious accident. Knowing his brother named him as his four-year-old niece’s guardian, he is anxious to reach the child and is shocked to learn his brother’s ex-wife, who abandoned the child when she was only a few weeks old and who has had no contact with her since, has claimed little Zoe and disappeared with her.

Rachel Hamilton has a degree in political science and is ambitious to advance in her chosen field. She works for Arizona Senator Troy Sheldon as a clerk, but has hopes of moving up into more demanding political areas. When a call comes from the senator’s personal secretary, Karl Trost, to join the senator and his wife, Whitney, in Hawaii where he is negotiating several high level Japanese contracts, she is excited and flattered. She is hurt too by the catty, jealous reactions of other members of the staff. The assignment she receives on arriving in Hawaii isn’t what she expected. Instead of working with the negotiating team, she’s to serve as nanny to Whitney’s daughter, Zoe.

Ben works closely with the police and FBI to find evidence that his brother’s death wasn’t an accident. He also makes some startling discoveries concerning the amount of his brother’s estate, the incompetence of his attorney, that his brother’s stock broker died mysteriously at about the same time his brother did, and that his niece is in Hawaii with the senator and Whitney. Rachel and Ben work at cross purposes at first to protect Zoe, but when they finally meet they experience a strong connection that carries through to the dangers they face on their return to New York and Washington, DC.

Bessey creates strong characters with standards and emotions her readers can identify with. Dialog is realistic and the situations and tools used are believable. The plot moves quickly without feeling rushed and errors are minimal. She presents a background that is beautiful and part of the story without allowing it to become a travelogue.

Tension is an important factor in this type of story and this one begins with high tension, then builds in a satisfying way to keep the reader reluctant to set the book down until finished.   LDS references are used sparingly and play an important and real role in the story. Though this story has political elements and has a feel of coming straight from today’s headlines, it doesn’t have a partisan slant. There is a note of romance, but it doesn’t overpower the mystery/suspense elements.

Mystery, Suspense, and Action readers will enjoy this one.

Sian Ann Bessey was born in Cambridge, England, and grew up on the island of Anglesey off the north coast of Wales. She graduated from Brigham Young University with a degree in communications. She and her husband live in Rexburg, Idaho, where they raised their five children. She has eleven published books to her credit with approximately half written for children.

THE INSIDER by Sian Ann Bessey, published by Covenant Communications, 206 pages, soft cover $15.00, also available on CD and for e-readers.